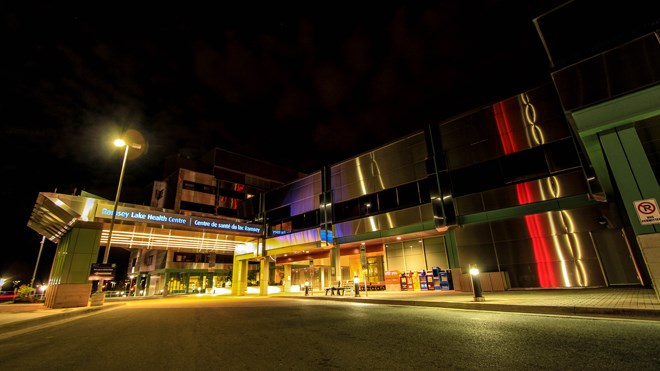 While the pandemic caught a lot of Canadians and Sudburians by surprise, medical leaders in Sudbury knew it was coming and knew things would be different. But what might have surprised them most was the ability of the medical staff to pull together to achieve newer and better ways of providing intense health care to the community. That was one of the revelations that came out of a panel discussion held during the annual general meeting for Health Sciences North this week; that and the fact that all the medical team leaders were women.

While the pandemic caught a lot of Canadians and Sudburians by surprise, medical leaders in Sudbury knew it was coming and knew things would be different. But what might have surprised them most was the ability of the medical staff to pull together to achieve newer and better ways of providing intense health care to the community.

That was one of the revelations that came out of a panel discussion held during the annual general meeting for Health Sciences North this week; that and the fact that all the medical team leaders were women.

Their achievements were showcased this week in a panel discussion at that meeting.

The panel was introduced by HSN vice-president and chief nursing executive Lisa Smith, who said she was honoured to be able to introduce "so many incredibly talented people".

Erin Tarini, administrative director of the HSN clinical laboratory, was the first to reveal how her lab team was a group of the professionals at the hospital lived and breathed everything COVID-19 right from the beginning and that the demand for rapid planning and acquiring new equipment were experiences that would never be forgotten.

"In early 2020 we had discussions to develop on-site testing quickly, ramp up according to demand, however it was realized very quickly we were going to need to be the go-to place in Northeastern Ontario to support our regional hospitals who did not have the ability to send their tests elsewhere," Tarini said.

She added that HSN had the first hospital lab in Ontario that was able to perform the VOC (Variants of Concern) screening which she said was hugely beneficial in helping to manage outbreaks.

Dr. Deborah Smith, a family physician in Sudbury, was retired and was in Florida when the pandemic hit. She contacted the hospital and asked if there was any way to help. Smith would become the COVID-19 assessment (testing) centre medical lead. She said she worked with amazing people at HSN and learned a lot.

"This definitely changed my retirement trajectory," but it's something she looks forward to, said Smith.

Kayla Stevens, RN, the clinical manager of the respiratory care unit. She said a big part of the job was the balance of looking after newly admitted COVID-19 patients while still being able to provide in-patient care to the internal medicine patients and other respiratory patients.

"The other thing was not knowing what to expect and how we were going to manage this unknown illness with being able to become a stronger advocate for my patients and my staff, knowing what we needed to be safe and to optimize the care of everybody involved. She said the team was able to care for roughly 145 COVID-19 patients.

Also speaking was critical care physician Dr. Josée Thériault, HSN's medical director of critical care, who said she likes being at the bedside caring for her patients. She was also the lead physician for nine critical care units across Northeastern Ontario, from Parry Sound to the James Bay coast.

"Everybody worked together to bring the best to the patients," said Thériault.

Perhaps the best known team member was public health physician Dr. Penny Sutcliffe, the medical officer of health for Public Health Sudbury and District. She said her role was different in that most of the team at the hospital know their patients on an individual basis who all required their own specialized care.

"My patients, as it were, is our community and our population which I am very honoured to serve," said Sutcliffe. She quickly added that it was also the shared work of the "small but mighty" 250-member team at the health unit, serving what she called the vast area of Greater Sudbury, Manitoulin Island and the wider Sudbury District. Sutcliffe said in the past year, dealing with COVID-19 has consumed nearly 90 per cent of the health unit's operating expenses.

The team leaders were asked to comment on what they might call "the defining moment" for them and their teams during the pandemic.

Lab director Tarini said there were many memorable memorable moments, but there were discussions of whether the team could ever do up to a thousand tests per day. Tarini said she shook her thinking that it would never be possible for a hospital lab to do that. But it happened on August 24, 2020, she recalled.

"That was the tip of the iceberg," said Tarini. "We consistently met that testing target of greater than a thousand, 13-hundred, 14-hundred, 15-hundred. We saw days of close to 19-hundred, two thousand tests which was remarkable."

Tarini said it was a massive team effort requiring "every hand of deck" but added it was "a memorable defining moment."

Respiratory care manager Stevens said there were several great moments, but one that stood out was the arrival of their first suspected COVID patient on a Saturday in early March 2020.

"So realizing, oh-my-god it's here. What if this is positive? Are we ready? How are we going to staff this? How are we going to manage and roll this out?" Stevens added that the patient was her own grandfather. As it turned out he was negative. Stevens said it was still an important moment to remember seeing him being safely discharged with the intensive care unit, "to see him wheeled out with oxygen to go home to his family."

On another day, Stevens recalled that six patients were suddenly admitted from a retirement home during the second wave.

"At one point we had 21 COVID patients on the unit at the same time, which I don't think we ever anticipated as part of our reality," said Stevens.

"We are still learning every day. We still have memorable moments," said Stevens.

She said it was the very next day, on March 10, when the first case was revealed in Sudbury.

"We all took a deep gulp and said here we go, and I must say we haven't stopped since."

Sutcliffe said the day that sent a chill up her spine was the day her team learned there was a COVID-19 case transmitted from within the community. She said she knew the community was entering into a new era.

On the other side, Sutcliffe said there was a good memory she keeps from the first vaccination that was given in the district, to an elder at the Wikwemikong Nursing Home.

"That was a tremendous moment," said Sutcliffe.

Moderator Lisa Smith asked the doctors about challenges they faced and overcame in the past year.

Family physician Smith remembered a case with a sick child, and there was a huge demand for testing. She said the children were especially fearful about getting tested.

"We had never tested that many people," said Smith.  She said the lab team stepped up, putting in many extra hours of work to get the job done.

Dr.Thériault recalled a time when the critical care team was "being asked to prepare for the worst" at a time when there was limited PPE at the beginning and team members were not sure what to expect. She said the team found ways to pull together to provide safety for the staff and give the patients the best possible level of care.

The leaders were also asked what they learned about themselves and other team members. They answered with words like flexibility, resilience, humanity, kindness and learning the importance of partnerships.

After hearing the testimonials, hospital board chair Floyd Laughren said it wasn't a medical word, but he said he was "gobsmacked" and more than impressed with the stories of success from the team leaders.