There is no vaccine yet for RSV, but one is in the works. Sudbury-based medical research company Medicor has undertaken phase one critical trials for the vaccine. The medical trial will include up to 30 patients in Sudbury, and 120 across Canada.
Oct 29, 2014 8:36 PM By: Jonathan Migneault 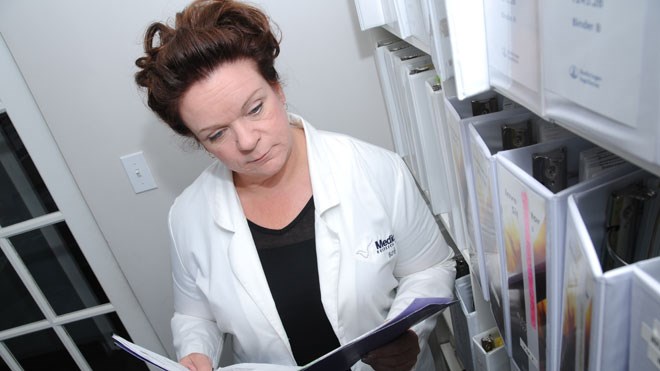 Barb Ward started Medicor 10 years ago, and now conducts around 27 clinical trials per year. File photo.
There is no vaccine yet for RSV, but one is in the works.

The medical trial will include up to 30 patients in Sudbury, and 120 across Canada.

Patients in the United States will also be given the experimental vaccine.

The vaccine has been in development for about five years, and if all goes to schedule, it should take another five years for it to be available to all mothers and their infant children.

Unlike most vaccines at this early stage, pregnant women have participated in some of the trials.

“To be giving an investigational vaccine to pregnant women just speaks to its safety,” said Diane Langdon, Medicor's recruitment co-ordinator.

Pregnant mothers should be able to pass on their antibodies to their babies before they are born, to protect them from RSV in early infancy.

Clinical trials for a vaccine of this kind are nothing new for Medicor.

Barb Ward, a former nurse, started the company 10 years ago.

“I always had a focus on community research,” she said. “What's going to benefit the patients in our community?”

Ward's early intent was to keep the company small and conduct three or four clinical trials a year.

But soon after she incorporated the company, another local medical research company went bankrupt.

Ward was the new kid on the block, but had to take on a lot of the company's unfinished work.

“You can't just stop a clinical trial,” she said. “It's not safe for patients.”

Medicor had more than a dozen medical trials on the go after its first year.

Ward met her five-year business plan three months after she incorporated, and the company has continued to grow since then.

Medicor now conducts around 27 clinical trials a year that cover pharmaceuticals and vaccines.

Ward employs 10 full-time employees, two casuals, and contracts out work to a number of research doctors throughout the city.

“We pay out about $800,000 into the community each year, between wages, what we pay the doctors, and what we pay the patients as a stipend for travel and meals,” Ward said.

Medicor receives no government funding, and instead functions on a fee-for-service model.

Pharmaceutical companies approach Ward and her staff after they've completed the early research on a new medication or vaccine, and are ready to begin clinical trials.

The trials can range anywhere from 12 days, for the shortest, to seven years and counting for the longest.

Medicor has made fewer headlines than Sudbury's Advanced Medical Research Institute of Canada (AMRIC), but also serves a different purpose.

“They're doing very early stage (research),” Ward said. “There's lots of room for all of us.”

It is possible, she said, that down the line both organizations could collaborate, once AMRIC research comes closer to being market-ready.