After mingling for more than an hour, Melanson took the podium, his campaign logo displayed on big screen beside him, Van Halen’s ‘Right Now’ playing in the background.
Jun 20, 2014 7:46 PM By: Darren MacDonald 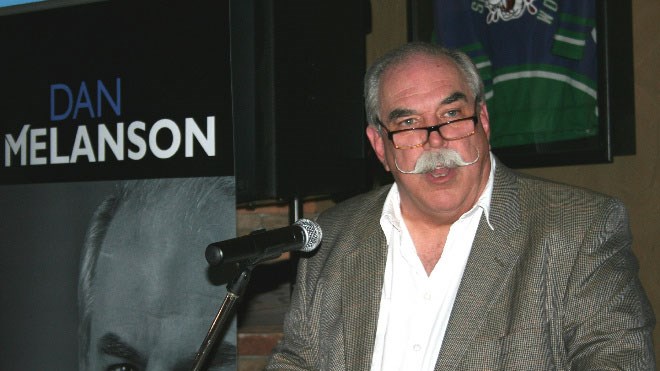 Mayoral candidate Dan Melanson addresses supporters Thursday at Buzzy Brown's, where he officially launched his campaign platform. Darren MacDonald photo.
After mingling for more than an hour, Melanson took the podium, his campaign logo displayed on big screen beside him, Van Halen’s ‘Right Now’ playing in the background.

It was a smooth entrance, planned down to the last detail — including memory sticks for the media emblazoned with Melanson’s trademark handlebar mustache, containing copies of his speech and campaign photos.

After a warm introduction by his stepdaughter, Noreen – who said he’s affectionately nicknamed ‘Grumpy Dan’ by his granddaughter – Melanson addressed the crowd, first thanking his wife for backing his “life-changing decision to enter politics.”

Most of his speech covered familiar territory for the former president of the Greater Sudbury Taxpayer’s Association, who has long supported leaner local government, mainly by trying to sell municipal services the city is not required to offer.

That includes anything that’s not what he calls “a core municipal service” – including arenas, city-owned trailer parks, Pioneer Manor and Greater Sudbury Utilities.

“Why do we need to keep raising taxes to pay for programs that we are not mandated to pay for?” Melanson said. “Why not divest ourselves of programs and services instead of raising taxes?”

While using some of the GSTA’s familiar fiery rhetoric — “city hall is broken,” he said — he also talked about the importance of working with city council to get things done. With at least three and possibly as many as six council seats up for grabs in October, Melanson praised the candidates running for office.

“The roster of new people running for city council is impressive — it has to be a record,” he said. “As mayor, I will move our city forward by leveraging partnerships, building relationships and working closely with the newly elected council.”

Lack of support among city councillors doomed much of Matichuk’s agenda, which largely mirrors Melanson’s, who was a high-profile backer of the current mayor in the 2010 election. Some of the people who worked on Matichuk's campaign were at Melanson's launch to support him. He spoke carefully when asked about Matichuk's decision.

“She had a very tough go with the council she was working with,” Melanson said. “Marianne got elected on a campaign platform, she brought them all forward, they all got shot down. You know as well as I do the number of 12-1 votes there were, and it shouldn't be like that.

The turnover on council is an opportunity to make progress on many of those issues, he said.

“It's probably going to make it a little less antagonistic, because you're not going to have to overcome a lot of the negativity that everybody has seen over the last four years,” he said.

In addition to divesting services, he also supports issuing municipal bonds to help fund rapid road repairs, as well as water and sewer maintenance. Maintenance of both has fallen behind by more than $1 billion.

With the city spending around $46 million on road repairs each year, Melanson said the city will only fall further behind. But the city could leverage hundreds of millions in repairs by issuing bonds. With interest rates at historic lows, the debt repayments would be comparable to what they spend now each year.

“If you look at what that would cost us on an annual basis, for interest and principal repayments, it works out to about the same amount we're paying now for Band-Aids – and getting nowhere,” he said.

“It's like trying to build a house by spending $50 a week from your pay to buy two-by-fours. By the time you have enough two-by-fours, the first ones are rotten.”

To rebuild Sudbury Arena, he favours the sort of public-private partnerships other cities have used, where the arena is built and operated by the private sector, in exchange for a fixed investment from the city.

“And (those other cities) all have better arenas than we do,” he said. “If it works for them, why won't it work for us? You might have to pay a buck an hour more for ice time, but you have more (ice) pads, better conditions, better facilities. Why wouldn't you do that?”

Municipal arenas are one of the services he would like the city to stop offering entirely.

“I don't see that as a core service, quite frankly — Sudbury Arena, and arenas in general.”