Posted by Sudbury Northern Life Reporter Laurel Myers Canadians seem to be ill-informed about the war in Afghanistan, according to Dr. Ray Wiss, a medical officer who spent three months last year on the front lines in the war zone.
Oct 29, 2008 5:09 PM By: Sudbury.com Staff 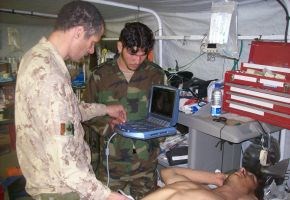 Dr. Ray Wiss performs an ultrasound in the field while on a tour of duty as a medical officer on the front lines in Afghanistan. Supplied photo.

Canadians seem to be ill-informed about the war in Afghanistan, according to Dr. Ray Wiss, a medical officer who spent three months last year on the front lines in the war zone.

He will be giving  a presentation in the Cambrian College Amphitheatre on Nov. 6 from 7-9 p.m. Members of the community are invited to come out and listen to Wiss talk about his experiences in the war.

“People can expect to hear what the life of the Canadian soldier is like on the front lines in Afghanistan,” Wiss said. “They'll hear about the life we had, the losses we've suffered and the successes we've achieved.”

From November 2007 to January 2008, Wiss was the trauma team leader at a Forward Operating Base near Kandahar. He is sharing his story as a way of educating the public about Canada’s role in the war.

“Whether or not people come to the presentation, I ask Canadians to get informed about the mission,” the doctor said. “There's a lack of knowledge.

One hundred per cent of the ticket proceeds will be donated to the Military Family Fund — created in April 2007 by General Rick Hillier, the former chief of defence staff, to assist military families faced with unforeseen, and often immediate, needs that have resulted due to conditions of service.

The funds raised from this event will go directly to the family of Corporal Bill Kerr, a local soldier who was critically injured on Oct. 15 when a bomb detonated during a routine foot patrol near Kandahar City.

The Military Family Fund holds a particular importance to Wiss.

Wiss grew up in Sudbury and joined the staff at the Sudbury Regional Hospital in early 2001. Prior to his tour as a medic in Afghanistan, he had also served as an Infantry Officer in the Canadian Forces.

Kate Furlotte, manager of client services at TTC Creative Communication, had an opportunity to listen to the doctor speak at a Rotary Club meeting and said the presentation was “deeply moving” and “enlightening.”

“The average Canadian watching the war from his or her living room only has limited knowledge of the incredible difference we are making in Afghanistan, and the level of terror that our troops are faced with every day,” she said.

“Dr. Wiss was there, on the front lines, under constant Taliban rocket fire, saving the lives of every soldier who came through the door, whether Canadian or Taliban.”

Tickets for the presentation are $20 and are available at Copy Copy (87 Durham St.) or at any of the eight Scotiabank branches in Sudbury.