For nearly 70 years, Ontario Youth Rangers were hired to help with Ministry of Natural Resource tasks. They would help keep green spaces tidy, clear trails and fulfil other duties at the request of the ministry.
Oct 10, 2012 6:46 PM By: Jenny Jelen 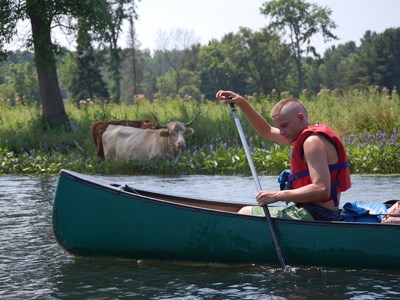 Ontario Ranger Wolfe Szwarc paddled by grazing cattle on the Burnt River near Kinmount this past summer. Ministry of Natural Resources cuts mean the overnight Youth Ranger program is being morphed into a day program — taking away from the “Ranger experience.” Supplied photo.

For nearly 70 years, Ontario Youth Rangers were hired to help with Ministry of Natural Resource tasks.

They would help keep green spaces tidy, clear trails and fulfil other duties at the request of the ministry. While they had the opportunity to learn about the great outdoors, the 17-year-olds in the program also learned about work ethic, environmental responsibility and leadership.

Youth would spend eight-week blocks working in often rural and remote parks, typically far away from home. They would have no access to technology; Instead, they were expected to form relationships with their peers, explore the outdoors and develop skills for life.

According to Marty Dubuc, the Rangers are just putting the traits they learned to good use as they fight back against the province's decision to axe the program.

“They might not be happy we're making such a fuss about it, but the (province) should be proud their program was such a success,” the longtime Ranger supervisor said. “The MNR created this monster. They trained us to be leaders, work as a team and show interest in caring about our natural resources.

“Obviously we're going to put up a fight about it.”

The news that the overnight program was being cut from the MNR's plan came at the end of September.

Other cost-saving initiatives like closing 10 parks, modernizing the way the Ministry supports community-based stewardship activities and channelling its efforts for Outdoor Card renewals through social media and magazine ads have also been put in place.

A media release from the MNR stated the OYR program would be morphed into a day-based youth program — Dubuc said the two are nothing alike.

“It's not the same vibe at all,” he said. It's not just the atmosphere that's lost when the program is cut from an eight-week adventure to an eight-to-four job.
Travel time means Rangers will be forced to stay close to home, and the smaller team they will be working on will prevent them from tackling major projects.

Rangers interested in the day program will also have to work close to their home park, if they have one, since they will need to arrive at “work” every morning in time for their shift.

The MNR created this monster. They trained us to be leaders, work as a team and show interest in caring about our natural resources. Obviously we're going to put up a fight about it.

While the overnight program is more costly to run than the day program, Dubuc said what youth get from it isn't really something that can be measured with a dollar sign.

“The biggest strength of our program can't be measured in dollars and cents,” he said. “These are priceless influences on youth's lives.”

On the Friends of the Ontario Ranger Program Facebook page, ex-Rangers have been flooding the wall with their thoughts on why the program is of value.

“Where else would a 17-year-old find a summer job where they get to do hands-on work involving anything from tagging birds to tracking caribou to tree planting to painting and measuring wood for door frames all while making a difference in the community?” one youth wrote. “The Ontario Ranger Program does all of that and much more making today’s youth more aware of the fragile environment we live in which is so important especially now more than ever.

“The Ontario Ranger Program benefits young teens by keeping them active, providing work experience, introducing them to careers they may never have otherwise heard of, teaching them life skills like leadership and teamwork while giving them independence and helping them grow as individuals.”

It's a common feeling among those who have been part of the program. A petition started by a former Ranger has already received about 2,800 signatures. Allison Hauser, who began reaching out for signatures of support, said she is passionate about the program because of the unique experiences Rangers receive.

“You get to build necessary teamwork, leadership and general life skills form being in the Ranger program,” she said.

Dubuc said the most disheartening part of the news was the fact that no one from the program was consulted.

“We don't know how much, if any, effort went into saving the program,” he said. “I'm positive if they had come out to these camps even once, they'd have seen the stuff that isn't measured in dollars and cents.”

In a media release from the MNR, it was stated that “the ministry remains committed to youth employment and training, and expects to offer more than 1,900 youth employment opportunities in 2013 — the same number as in 2012.”

Other groups, like the Federation of Northern Ontario Municipalities, have been fighting back against other aspects of the MNR decision. Alan Spacek, president of FONOM and Mayor of Kapuskasing, said discontinued maintenance on northern parks will be detrimental in Northern communities.

“Yet again this provincial government has acted without consultation, closing parks that are the lifeblood of Northern communities adjacent to them,” he said.

The decisions made by the MNR means savings of about $7.1 million annually, at the expense of 28 full-time jobs and 102 seasonal jobs.