Say they were only speaking the truth during controversial fire optimization process
Dec 8, 2017 9:00 PM By: Darren MacDonald 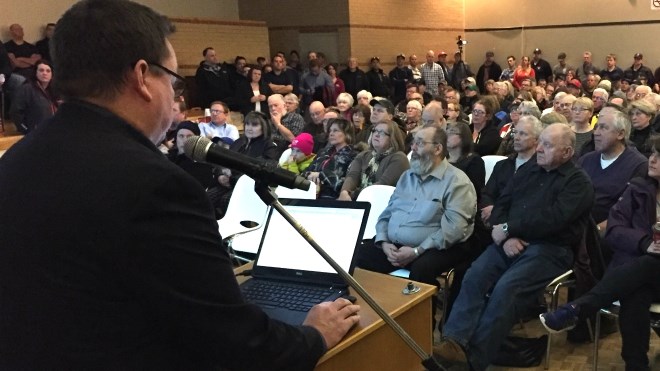 The two cities councillors facing a harassment investigation say they're not too concerned because they believe they didn't harass anybody, just spoke the truth. (File)

The two city councillors facing a harassment investigation say they're not too concerned because they believe they didn't harass anybody, just spoke the truth.

Ward 2 Coun. Michael Vagnini and Ward 3 Coun. Gerry Montpellier are the subject of the investigation, being carried out by a consultant hired by the city.

While details have not formally been made public, the case is related to the controversial fire optimization proposal presented last spring by former Fire Chief Trevor Bain. The plan would have harmonized fire response times across the city, but involved reducing the number of volunteer firefighters and hiring dozens more full-time firefighters.

Bain led public consultations on the controversial plan, which was ultimately shelved by city council. Bain was later dismissed when it emerged three volunteer firefighters were fired because of social media posts opposing the plan.

The harassment complaint was filed by the Sudbury Professional Fire Fighters Association on Bain's behalf. Union President Kris Volpel has said the union first complained to the city in March regarding the actions of some councillors toward Bain during the fire optimization meetings.

In October, the Ministry of Labour directed Greater Sudbury to investigate the complaint, to keep all documents relevant to the case and to ensure training requirements are adhered to.

On Friday, Montpellier said the case was unusual, but says everything he said during the process was factual.

"This is probably the first time in Canada that a union makes a complaint against somebody -- a councillor -- on behalf of the former fire chief who was never a union member to start with,” he said. "It's a serious matter, I know, but I'm having a hard time grasping this.

"I don't want to be flip about it, but I know absolutely everything I said, everything is recorded, and I know what I said. I was against the plan. I never said it was silly or anything, I just said taxpayers weren't ready to spend a couple of hundred million dollars to close fire halls."

Montpelier said he believes issues with the fire department began within weeks of his election in 2014, when a fire official told him that an older fire truck needed expensive repairs because its frame was rotten.

"So, wearing a suit and all, I looked underneath and said, no, it doesn't have a rotten frame," said Montpellier, who has years of experience as a vehicle appraiser.

He was then told it was damaged, and $1 million was needed to replace it.

"I said that's simply not correct," and said he knew a contract welder for the city who could repair it for $50,000.

"In retrospect, I find out that's why they didn't like me."

He used terms like "smoke and mirrors" and "empire building" during the public meetings, Montpellier said, but he was commenting on the plan, not on individuals.

"I never said anyone has funny ears or anything like that, I just spoke facts, all recorded," he said. "I'm not worried about (the investigation). It just kind of upsets me because I was working for my constituents -- thousands and thousands said they didn't want (the fire plan).

"The investigation, obviously, it is what it is. I'm not happy about it."

For his part, Vagnini said he's only speaking out because the investigation has become a popular topic on social media, with some commentators taking shots at him.

"They called me a Don Cherry wannabe,” Vagnini quipped. “That hurt my feelings. But the one that really hurt? They said (his hair) was over-gelled. I didn't sleep the whole night. They went right for the jugular."

Kidding aside, Vagnini said he wants the investigation to be held in public, not behind closed doors. He's being attacked in public on social media, so he argues the whole process should be public.

"If you're going to hammer me about my hair gel in public, let me defend myself in public," he said.

While making jokes about it, Vagnini said the process has him concerned.

"Of course -- every day when you get out of bed, you're concerned about it,” he said. “I'm here to represent the voice of the people. When I question anything, I question those things because the people have asked me those questions.

"All I ever did was respond the way people asked me to respond ... You talk about feeling bullied, I got to tell you, I feel tension on it. "But I can't stop because I would be letting down the people who elected me."

In a statement, Mayor Brian Bigger said the city is following the orders of the Ministry of Labour.

“I am not able to comment further on this matter to respect the integrity of the process,” Bigger said in the statement.

And Kevin Fowke, the city's GM of corporate services, said in a statement that they have brought in an external investigator to handle the matter.

“The policies and legislation in place provide an opportunity for a fair procedure for handling complaints and ensuring our workplace is free from harassment, discrimination, and violence for all,” Fowke said in the statement.

“We will continue to respect the privacy rights of everyone involved and so we will not be speaking any further to the matter.”