Thousands of cases of lung damage linked to vaping in the U.S. have scared some people back to tobacco, although only a handful of cases have been reported in Canada. Shop manager says Canadian health sector should follow British lead and embrace vaping as a 'safer alternative'
Nov 14, 2019 2:45 PM By: Darren MacDonald 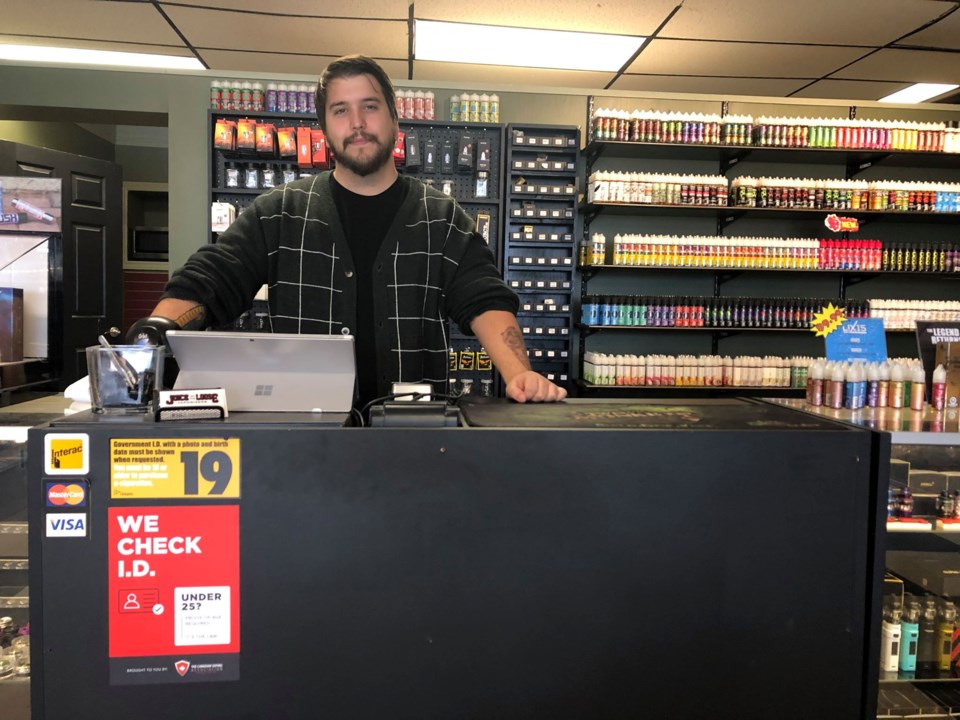 Zach Richer, manager of Juice on the Loose on Barrydowne Road, says business took a hit in September when stories of vaping illnesses hit the news. But it emerged later the cases were tied to illegal THC vapes containing vitamin E acetate (Darren MacDonald/Sudbury.com)

When news broke in September of more than 2,000 serious illnesses related to vaping in the U.S., it was a shock to an industry that was viewed as a flawed, but still a healthier alternative to tobacco.

Since then, however, it has emerged the illnesses seem to be confined to black market THC vapes that used vitamin E liquid. A test on 29 of the patients all showed the presence of the sticky vitamin E acetate in their lungs. Health officials are calling it a “breakthrough” in the investigation, although it is early and many questions are unanswered.

Closer to home, Canada has set up a webpage* that includes the latest information on illnesses in Canada. As of Nov. 6, there have been seven cases – two confirmed in Quebec, and five probable cases – two in New Brunswick and three in B.C.

“We cannot stand by and watch a new generation of Canadians become dependent on nicotine or be exposed to products that could have significant negative consequences for their health.”

Not surprisingly, Zach Richer, manager of Juice on the Loose on Barrydowne Road, wishes Canada would follow Britain's lead, which has concluded vaping is 95 per cent less harmful than tobacco smoking.

Richer said all of the cases he's heard about in which someone gets sick involved back market vapes. In fact, if you vape THC in Canada, it's a black market product since legal THC vapes have not yet hit the market.

The problem is the vitamin E doesn't dissolve when smoked. So it ends up sticking to your lungs. Nicotine vapes work very differently.

“The base ingredients used in an e-cigarette liquid is propylene glycol and vegetable glycerin — water soluble ingredients,” Richer said. “The issue is with THC vapes is that the vitamin E and the hash actually separate. And the vitamin E isn't water-soluble and collects in your lungs. That's when you start seeing a problem.”

Richer said they saw a rapid drop in business when news of the illnesses hit in September, and some customers went back to tobacco.

“There are a lot more knowns now, so it seems like that fear is really dying down, because businesses is really starting to pick back up again. But we took a pretty major hit in September.”

Considering tobacco contains so many more harmful chemicals, and is known to cause a range of deadly diseases, he can't understand why cigarettes are being described as a better choice than nicotine vaping.

“It's five per cent the risk of smoking tobacco, and that's in terms of cancer,” Richer said, citing the British conclusions. “I think it's great that people are asking that question, but as it stands now, if you look around the world there have been no instances of people getting sick or dying from (legal) e-cigarette use.”

Problems associated with nicotine vapes stem from people who buy black market produces, or who alter their vapes themselves, he said.

The industry is regulated in Canada, Richer said, but it actually could use a few more. One of the major concerns is that nicotine vapes act as a entry point for young people to get addicted. While you have to be 19 to enter Juice on the Loose, similar to the LCBO, he said young people can buy vaping supplies at corner stores and gas stations.

“We can't advertise to anyone underage, whereas when you go into gas or convenience store you see ads for vapes right there,” Richer said. “That is where a lot of that advertising comes from. Kids can walk into a gas station, but they can't just walk into here.”

He said tightening regulations covering nicotine concentrations would also help discourage young people from starting. Currently, some companies produce nicotine salts with 50 mg or higher nicotine levels, much more potent than levels you would find in cigarettes. And the fastest growing product are nicotine salts, which unlike the liquids deliver the nicotine buzz quickly.

“So from puff to the time it reaches your brain, the delay is only about 30 seconds,” he said, compared to three minutes for the liquids. “There wasn't a big spike of youth vaping until the popularization of devices ... that offer that really high nicotine strength in a fast metabolizing format.

“I think a lot of the issues that we have right now strictly has to do with the fact that these are kids who are interested in adult taboos and they also like adult taboos that have a real effect on their minds and their bodies, which a high nicotine strength e-liquid do quite well.”

Nicotine salts have their uses, Richer said. Many people who tried vaping to quit tobacco failed because of the three-minute delay of the liquids. But the salts deliver nicotine more quickly, and have helped people drop tobacco.

“A lot of people who have tried the liquid and failed are now successful using nicotine salts, so let's not just demonize salts,” he said. “But I think anything above 25 mg is unnecessary. I think that's just people looking for some sort of buzz, not just trying to satisfy a nicotine craving. And that's going to be more likely young people, right?”

*An earlier version of this story incorrectly stated Health Canada advises returning to cigarette use if you are vaping to quit smoking.