“The resources haven't been developed yet in Ontario,” she said. Fetal alcohol spectrum disorder affects around one in 100 children, although it is more prevalent in some communities.
Sep 10, 2015 8:10 PM By: Jonathan Migneault 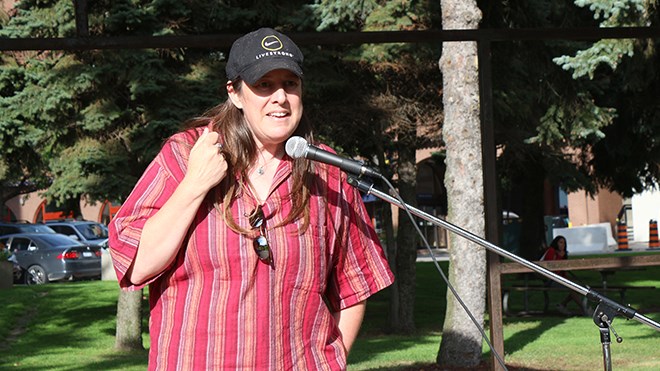 Terrie Pitfield, who was diagnosed with fetal alcohol spectrum disorder as an adult, two years ago, spoke about her experience with the disorder at an International FASD Awareness Day event in Sudbury Wednesday. Photo by Jonathan Migneault.
“The resources haven't been developed yet in Ontario,” she said.

Fetal alcohol spectrum disorder affects around one in 100 children, although it is more prevalent in some communities. It can lead to lifelong challenges, and it is completely avoidable.

The disorder describes a range of effects that can occur in a person whose mother drank alcohol during pregnancy. The effects may include lifelong physical, mental, behavioural, and learning challenges and disabilities.

Cheechoo said a big turning point to help children with the disorder in Sudbury was when Health Sciences North partnered with the North East Aboriginal Partnership Project to establish the NEO Kids FASD Clinic in 2011.

The clinic uses a multidisciplinary approach to diagnose children who may fall under fetal alcohol spectrum disorder and refer them to the appropriate interventions.

Thanks to temporary bridge funding, the clinic is able to conduct around eight detailed assessments per month with a team that includes a social worker, nurse, occupational therapist, pediatrician, psychologist and a speech language pathologist.

Kelly Oreskovich, the clinic's social worker, said NEO Kids is trying to get more sustainable funding for the clinic so it can hire a community outreach worker who would make it easier for parents to find the appropriate services for their children after they are diagnosed.

Because the symptoms from fetal alcohol spectrum disorder can vary dramatically, those services might be anything from speech therapy to physical therapy or extra help in school.

Students with the disorder may have behavioural problems or learning disabilities that differ from those teachers might encounter in children with autism.

The network is also working to expand education and outreach initiatives.

“There is no safe amount of alcohol to drink before damage occurs,” Cheechoo said.