More than a coffee cup: The hidden Indigenous messaging in McDonald’s seasonal cups

The original design for this year’s seasonal cups embraced Indigenous stereotypes, until young spiritual elder and artist Philip Cote was brought to sweep those away and inject some real meaning into the concept
Dec 24, 2020 2:45 PM By: Jenny Lamothe, Local Journalism Initiative Reporter 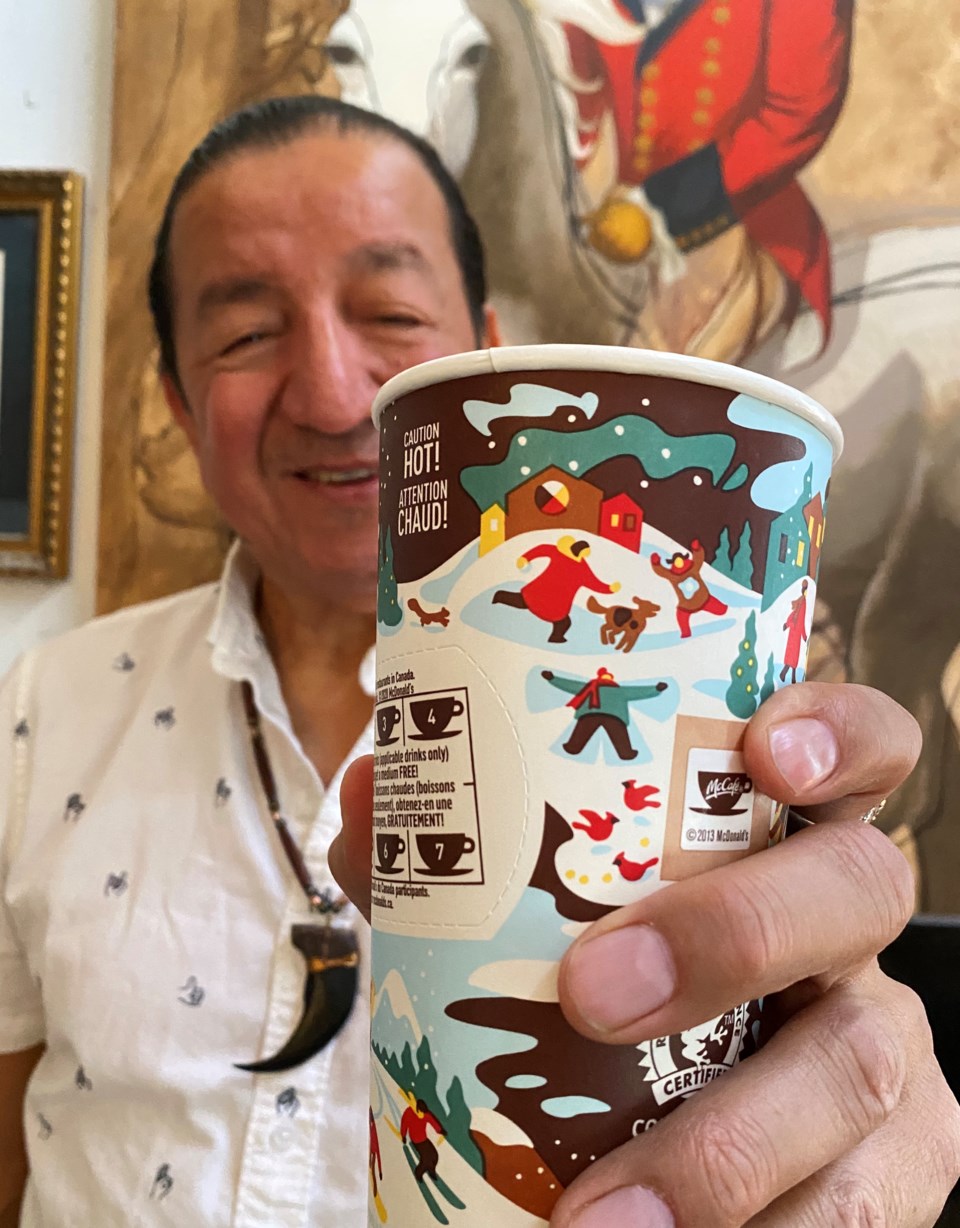 In 1979, when Philip Cote was 18, he was given his Indigenous name by a well-known elder Joe Couture.

The name is: Noodjmowin. It means ‘healer.’

He went to a naming ceremony and when he was given his name, Cote asked the wise Couture how he had chosen it for him. Cote says Couture told him: “I saw you standing in front of crowds of people. You're talking, you're talking to all these people. And when you were talking, all this purple light was coming out of you. And it was coming from you on to all the people, you're healing them with your words. And you were being healed too.”

Cote was told that part of this healing was his work to overcome the divide between Indigenous and non-indigenous people.

He didn’t expect that one of these healings would come in a strange form – a McCafe cup for McDonald's.

But it’s been a strange year, so that adds up.

Cote is true to his ‘healer’ moniker in every sense of the word. Originally from Moose Deer Point First Nation: Shawnee, Lakota, Potawatomi and Ojibway, but now based in Toronto, Cote is a Sundancer, Pipe Carrier and Sweat Ceremony leader recognized by Elder Vern Harper and Floyd Looks for Buffalo Hand. He is also a Knowledge Keeper, a Young Elder, a descendant of Tecumseh and a graduate of OCAD University’s Interdisciplinary Art Media and Design Masters program.

He is also the perfect person to act as a Cultural Advisor for a company looking to add Indigenous artistry to a project they were creating; enter Cossette Design and the new seasonal cups for McDonald's Restaurants.

It’s a good thing the design team asked him for advice. Early designs featured inukshuks, totem poles and a stereotypical portrayal of an Inuit person – fur hood and all.

So, Cote worked with the company’s commercial artists to create a small but significant way to heal the divide: a coffee cup. That coffee cup has now put his name on the lips of people across the country – quite literally.

There are subtle variations on all the cups available, different sizes revealing different scenes. There is a drum, ice fishing, families playing in the snow and preparing for celebrations in their homes. You’ll find the northern lights, deer and birds like the cardinal, the blue jay and the chickadee; those that stick around all winter long.

There are also two significant symbols.

First, the unifying symbol for almost all Indigenous people: the medicine wheel.

The other is a bear; it is white, with a red heart.

But although it is white, it is not a polar bear. It is a ‘white’ black bear – a spirit bear.

He has a red heart to represent “heart thinking.” And it is this bear that represents the end of the prophecy of the seven fires: that one day, Indigenous and non-Indigenous hearts will be given a choice between two paths. If they choose the right path, the Seventh Fire will light the Eighth and final fire of brotherhood and sisterhood.

“Well, for me, the story of the eighth fire is the white bear coming down from the north,” said Cote. “It’s a time where our Indigenous people and knowledge would start to mingle with the western people and their knowledge, and open up this road of the future for Indigenous people. It's where our voice will be heard just as clearly as the western voice. And this was going to be the beginning of the new people.”

And all of it fits on one little cup. All the beauty of the nature of Canada and those who protect it, those who built the country and those who settled on it; they can find the wisdom to come together as one and do so with a hot beverage.

You can find the cups that Cote created now at McDonald's restaurants across the country and you can find his work here.