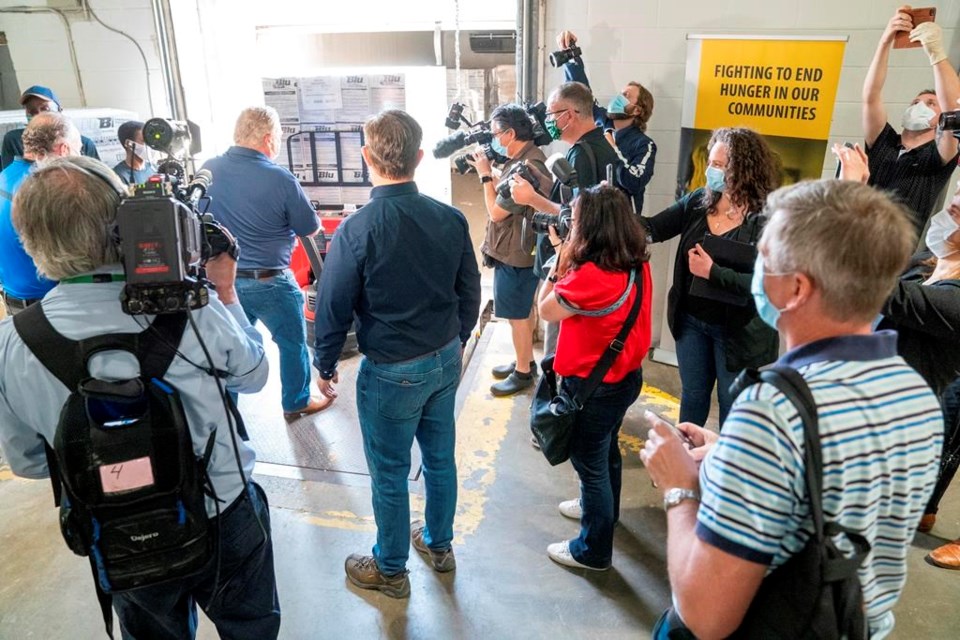 TORONTO — Mother's Day gatherings contrary to physical distancing rules helped boost Ontario's COVID-19 cases, the health minister said Monday, and those rising numbers plus concern over a large crowd at a Toronto park over the weekend are delaying any easing of those rules.

That trend predates the province's Stage 1 of reopening launched on May 19, Health Minister Christine Elliott said.

"The increase in the number of cases that we're seeing now in the last few days really relates back to the week before, with the Mother's Day events and so on, people seeing families when they should not have been more than five people together," she said.

Premier Doug Ford himself has admitted that two of his daughters who don't live at home visited that weekend, in a group of at least six people. Provincial officials have told Ontarians to avoid being within two metres of anyone outside their household, and not to gather in groups larger than five.

Elliott had previously said chief medical officer of health Dr. David Williams was considering expanding the rule about gatherings to more than five people, and introducing a so-called bubble system that other provinces have implemented, where two households can closely interact only with each other.

But that was when provincial COVID-19 case numbers looked more promising, she said.

"Given what happened with the numbers of people coming down with COVID in the last few days, along with what has happened over this past weekend with large groups of people coming together in Trinity Bellwoods and other parks, Dr. Williams is reluctant to move forward with that right away because there is a concern about people creating groups that will be too large," she said.

Ford said it looked like a rock concert without a band, and that he's disappointed with everyone who was there.

"My recommendation to anyone at Trinity Bellwoods, why don't you do us all a favour and go get tested now," he said Monday.

"What I worry about is them going back home, how about their family members? Their brothers, sisters, mothers, aunts and grandparents? Weren't they thinking of them when they went there?"

Associate chief medical officer of health Dr. Barbara Yaffe later noted that the incubation period can be up to 14 days, so she instead recommended those people self-isolate and see if they develop symptoms first.

Ford's comments come as the province attempts to boost low testing numbers — reported Monday as 8,170, despite a daily capacity of nearly 25,000.

Ontario has struggled to boost its testing numbers after completing a blitz of testing nearly every resident and staff member of long-term care homes.

Ford announced Sunday that anyone concerned they may have been exposed to COVID-19 can now get tested, whether or not they have symptoms. He said mass testing is the province's best defence against the virus and a new testing strategy targeting specific sectors will be unveiled this week.

The premier has spoken about testing asymptomatic front-line health-care workers, large workplaces such as food manufacturing facilities, groups such as truck or taxi drivers, and doing a second round of testing in long-term care.

He said Monday that Ontario will target specific postal codes that are hot spots, such as parts of Peel Region including a particular area of Brampton, parts of Toronto including northern Etobicoke and Scarborough, as well as the Windsor-Essex area.

The total also includes 19,698 resolved cases, which represents 76 per cent of all cases, a third straight day of that percentage declining.

The new cases represent an increase of 1.6 per cent over Sunday's total. Ontario has now seen growth rates of between 1.5 and 1.9 per cent for 16 of the past 17 days, and the chief medical officer of health has said the province's curve appears to be in a plateau.

Ontario announced Monday that it has appointed hospitals to take over the management of two long-term care homes that have been unable to contain COVID-19.

The province said Humber River Hospital will manage Downsview Long Term Care Centre, which has reported 52 deaths, up from 40 just a week ago.

Southlake Regional Health Centre will manage River Glen Haven Nursing Home in Sutton, a 119-bed facility where there have been 20 deaths and 54 confirmed cases.

The orders last for 90 days, but the government said they can be extended, if necessary.

More than 1,500 residents and six staff have died of COVID-19 in long-term care facilities across the province. There are currently 159 active outbreaks, down from 189 a week ago.

This report by The Canadian Press was first published May 25, 2020.

Are you a high schooler in need of community service hours? You can volunteer virtually
Jul 6, 2020 9:00 PM

Greater Sudbury Development Corporation welcomes six new members
Jul 6, 2020 8:00 PM
Comments
We welcome your feedback and encourage you to share your thoughts. We ask that you be respectful of others and their points of view, refrain from personal attacks and stay on topic. To learn about our commenting policies and how we moderate, please read our Community Guidelines.