A Hanmer man said he's upset because Nickel Belt MPP France Gélinas is refusing to sign a form to make his 16-year-old daughter exempt from having to receive a vaccine against measles, mumps and rubella.
Feb 18, 2015 5:21 PM By: Heidi Ulrichsen 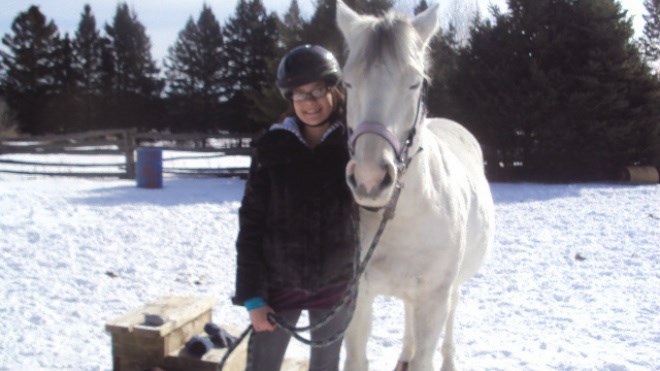 School officials want Megan Nyman, 16, to receive a measles, mumps and rubella vaccine. But she and her father, Mark Nyman, are opposed to the shot. Nickel Belt MPP France Gélinas is refusing to sign a form that would make her exempt from the vaccination. Supplied photo.

A Hanmer man said he's upset because Nickel Belt MPP France Gélinas is refusing to sign a form to make his 16-year-old daughter exempt from having to receive a vaccine against measles, mumps and rubella.

Mark Nyman said his daughter, Megan Nyman, a student at Chapleau High School, was being threatened with expulsion unless she received the vaccine. But he said he's opposed to her receiving the shot, as is Megan herself.

Under the Immunization of School Pupils Act, parents can fill out an affidavit which exempts their children from vaccines for conscientious or religious reasons. The form must then be signed by a public official.

But Nyman said when he phoned Gélinas' office to see if she'd sign the form for him, he was told that she'd taken a personal stand against signing these affidavits.

When contacted by NorthernLife.ca, Gélinas — a physiotherapist by training who's the former executive director of Sudbury's francophone community health centre — said she's taken this stance because of her support of vaccinations.

She said vaccines prevent deaths and long-term harm to people's health, as well as protect those who cannot receive the shot.

“This is something that is good for children, it is good for society, and the science is there,” said Gélinas, who's also the NDP's health and long-term care critic.

The MPP said she prefers that people go to their health-care providers to have the form signed instead so they can have “a health conversation about their decision, not a political one.”

She said she checked with the province's integrity commissioner, and it's up to individual MPPs whether or not they sign affidavits.

So far, though, Gélinas said she's only had the one request to sign the vaccination exemption form.

Nyman, though, said he feels MPPs should remain neutral about such matters, and sign affidavits regardless of their personal views.

He said he's now going to have to go elsewhere to have the form signed, and will likely be charged a fee, whereas Gélinas provides such services for free.

There's been 16 recent cases of measles in Ontario recently, part of a larger outbreak in North America.

The situation has prompted an angry response from several parents upset their children have been put at risk of contracting measles, thanks to people opposed to vaccinations.

Nyman said he thinks the risks associated with measles are “overblown” — he said he had the disease as a kid, as is none the worse for it.

He said he also thinks there may be harmful effects associated with vaccines.

“I don't believe chemicals should be dumped into our system,” Nyman said.

The majority of mainstream medical sciences points to decades of use and thousands of studies for safety and efficacy as proof that vaccines work and work without harming human life.