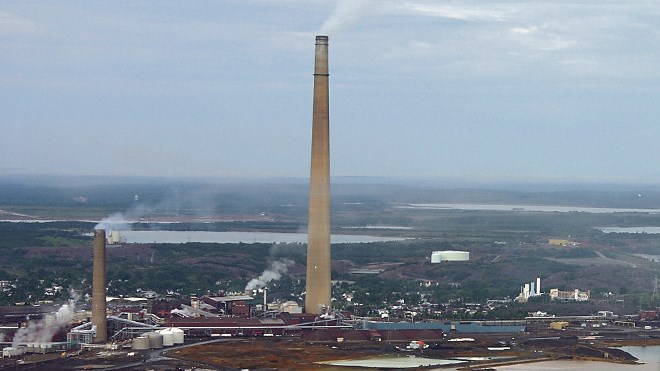 Updated at 12:35 p.m.: Vale has issued a statement regarding the layoffs Sudbury.com reported on earlier today.

The company said the prolonged downturn in the industry has harmed the company's profitability and its competitiveness.

It said Vale is working and continues to work with USW Local 6500 to reduce the impact tightening its operations will have on its workforce, highlighting the fact the company had identified 280 of what it calls "surplus employees", but worked with the union to reduce this number to below 100.

The company's full statement is below:

Vale’s Ontario Operations, and our industry as a whole, has been suffering through a prolonged downturn that continues to challenge the profitability and competitiveness of our operations around the globe.

This past year has been one of transformation in our Ontario Operations. The ramp down of Stobie Mine and the Clarabelle Mill Crushing Plant, the transition to a single furnace and the closure of the copper circuit in our Smelter means that Ontario Operations will produce lower volumes than we have in recent years. While we are smaller today, these decisions have set us up to be much more agile and competitive in the years ahead.

As a result, today, formal layoff notices were given to 21 production and maintenance employees in accordance with our Collective Agreement with USW Local 6500.

We value our people and took significant steps to mitigate the impact of changes to our business on our workforce. There were originally 280 surplus employees identified, however, through the displacement of contractors, natural attrition, offer of a retirement incentive and deployment of underground miners to the Copper Cliff Mine Project, we were able to reduce this number significantly.

We acknowledge the impact this has on affected employees and their families. As we move forward, we will continue to operate on the principle of minimizing impacts on our workforce as best we can as we make necessary operational decisions in the best long-term interests of our Company, our employees and the community.

Vale has laid off 21 people at its Sudbury operations, the president of the union representing those workers has confirmed.

Reached Thursday morning, Steelworkers Local 6500 president Rick Bertrand said the company has let go a mix of operations and industrial millwright workers, some who work on surface plants, and some underground.

He said Local 6500 will file a grievance about the layoffs. The union “will be fighting tooth and nail to get all our members back to work,” Bertrand said.

Vale is supposed to lay off workers in order of seniority, but that hasn't happened in this case, he said.

“Everybody has an opportunity to be provided a one-time training period of up to three months to displace a junior member, and that is not happening,” Bertrand said.

“They are not giving that opportunity to certain individuals.”

Under its contract with Local 6500, Vale is also not supposed to lay off people if there's contractors on site doing work that its own workers could do, he said.

“The union is very disappointed with the company's decision to lay off our members while contractors are still on the property,” Bertrand said.

When asked what's prompting the layoffs, the union president said he doesn't understand the company's reasoning, but that Vale will likely talk about recent closures of some of its Sudbury sites, including Stobie Mine.

Bertrand said he's been working with Vale to reduce the numbers of surplus workers by absorbing them into other operations.

“We've been working with the company for quite a while now,” he said. “We did start with a total of 230 surplus (workers), and then, we were down to 83 surplus. Today the company made the decision to lay off 21 of our members.

“However, with a company this size, we feel they can eat up the 21 members that got laid off today. The argument here for us is there's still contractors on the property, and there's many contractors. There's no reason why they should be laid off.”

Sudbury.com has received multiple reports of layoffs this morning at Vale.

We've received notification from sources who say they are impacted by these layoffs, and we're working to confirm the reports. It's not known at this time at which site or sites the layoffs may have occurred or who might have been affected.

Sudbury.com has been told 22 workers have been impacted, a number that includes 17 industrial mechanics and five miners.

We've reached out both to the company and USW Local 6500 for more information.

Sudbury.com will update this story as more information becomes available.