The nearly eight-month-long labour dispute between Vale Inco and the three Steelworkers locals in Canada who are currently on strike are mentioned in two recent editorials in national newspapers.
0
Mar 10, 2010 4:44 PM By: Sudbury.com Staff 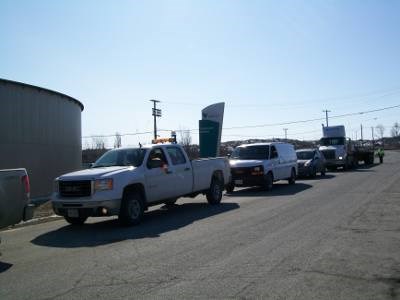 Part of the line of vehicles waiting to enter the Copper Cliff site on March 9. Pickets have been in place now for almost eight months. Photo by Heidi Ulrichsen.

The nearly eight-month-long labour dispute between Vale Inco and the three Steelworkers locals in Canada who are currently on strike are mentioned in two recent editorials in national newspapers.

In a March 8 Globe and Mail editorial entitled “We've sold off assets so often, branch plants 'R' us,” Jeffrey Simpson talks about how the natural resources of northeastern Ontario have been sold to foreign owners over the last few years.

“This region, like so many others in Canada, depends on trees and rocks; that is, forestry and mining. Both are struggling,” the editorial said.

“Part of the struggle, at least in the mining sector, relates to an issue no one wants to discuss in the discourse about competition: branch plants. This region's mining assets in large part have fallen into foreign hands. Gone are the nameplate Canadian companies - Inco and Falconbridge - replaced by the Anglo-Swiss Xstrata and Brazil's Vale.”

The editorial talks about how “workers at Vale's Sudbury's operations have been on strike since July 2009,” and how when Inco was purchased by Vale in 2006, the Sudbury deposits were seen as “fabulous assets” and are now “deemed too costly.”

“In fairness, the United Steelworkers union had been on strike in 2003 in Sudbury, and was hardly the easiest group to deal with when Inco and Falconbridge ran the show," the editorial reads. "The union should shoulder some of the blame for what's happened.”

Leo Hindley Jr., chairman of the Economic Growth/Smart Globalization Initiative at the North America Foundation and member of the Council on Foreign Relations, also mentions the Vale Inco strike in a March 9 Huffington Post article entitled “Tale of Two CEOs: One of Them Needs to Do Better.”

The article talks about a recent special section of the Financial Times, which focused on “individuals and companies who have displayed courage and vision in the aftermath of the most wrenching financial crisis since the Great Depression.”

One of the companies mentioned in the Financial Times section was Vale.

Hindley Jr. said Vale has operated essentially only in Brazil until fairly recently, and now operates in 36 countries. “And to its particular credit, much of  Vale's growth has been organic and achieved through steady investments in modernizing its mines and rail & port infrastructure,” the article said.

He also said “what really pisses me off is that all the while Vale has been executing of late on its grand global mission, it is, to quote the FT (Financial Times), 'embroiled in a long-running dispute' with its workers here in North America, a dispute that I lay squarely at the feet of its CEO, Roger Agnelli, and that arises from nothing other than Vale's greed and Agnelli's obstinacy.”