NDP calls for outside investigator to handle Olivier allegations

The NDP is calling for an independent prosecutor to be appointed to investigate whether the Liberal Party violated Ontario's Elections Act.
0
Jan 22, 2015 8:23 PM By: Darren MacDonald 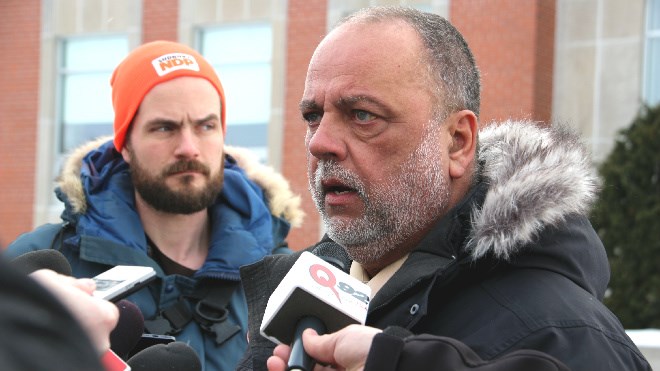 Timmins-James Bay MPP Gilles Bisson issued a statement today calling for an indendendent prosecutor to be brought in if it's determined Elections Act rules were broken in the Sudbury byelection. File photo.

The NDP is calling for an independent prosecutor to be appointed to investigate whether the Liberal Party violated Ontario's Elections Act.

Gilles Bisson, the Timmins-James Bay MPP and NDP house leader, said the province can't be trusted to handle the matter, given the current rules governing how complaints are investigated under the Act.

Bisson was referring to an investigation currently underway related to allegations by ex-Liberal candidate Andrew Olivier, who says party officials tried to induce him to support Glenn Thibeault by offering him a job or an appointment, and released recordings earlier this month of two of those conversations to back his claims. Thibeault, a former NDP MP, left federal politics in December and was appointed the Liberal candidate in Sudbury for the Feb. 5 byelection. Elections Ontario is investigating whether the Act has been broken.

But Bisson said he has an issue with the way the process works. He said when the investigation is complete, the chief electoral officer makes a recommendation to Ontario's attorney general on how to proceed.

“It seems to us there's something inherently wrong to be asking the people being investigated to receive a report, and to decide if there's actually going to be a prosecution,” Bisson said.

So the NDP is challenging Premier Kathleen Wynne to appoint an independent prosecutor to handle the case.

“When this report does come back and is issued from Elections Ontario, that she appoint an independent investigator who's arms-length from the government, who's able to investigate this and doesn't have a bias,” he said. “It's pretty clear that you can't put the chicken in charge of the hen house. That's essentially how it's currently set up.”

It's particularly important in this case, Bisson said, because there are recordings of the conversations which make it clear the act was broken. So it's a near certainty that the case will be pursued.

“What's different in this one, which has never happened before, we actually have tapes of the conversations where someone was offered a job or a position in order not to run,” he said.

“But you can't have a Liberal cabinet minister deciding how and when something may be prosecuted. It has to be an independent prosecutor.”

In response to Bisson's statements, Wynne's press secretary issued a statement Thursday in which she said a process for independent reviews of such cases is already in place.

"If the Chief Electoral Officer concludes there has been an apparent contravention of the Act,  the complaint would be referred to non-partisan officials in the Ministry of the Attorney General," Zita Astravas said in an email. "No politicians and no political staff have any involvement, and Gilles Bisson knows that.

"By focusing exclusively on this, the NDP are doing what the opposition parties do, they play politics and oppose."