A new heat recovery system, being piloted in a new 18-lot Garson subdivision currently under construction, will be a world first, according to proponents of the system. The subdivision is Naneff Gardens on Donnely Drive.
Aug 10, 2009 6:19 PM By: Bill Bradley 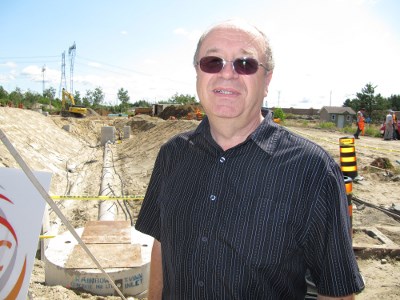 The sewer pipes laid in the trench are designed to be an innovative method of capturing wasted heat from the liquids in the piping and from the nearby ground. Les Lisk is a director of the new local company, Renewable Resource Recovery Corporation, that came up with the idea. Photo by Bill Bradley.
A new heat recovery system, being piloted in a new 18-lot Garson subdivision currently under construction, will be a world first, according to proponents of the system.

The subdivision is Naneff Gardens on Donnely Drive.

A new local company, Renewable Resource Recovery Corporation (RRRC), has a patent
pending on a type of sewer pipe that is designed to capture thermal energy from fluids in wastewater piping. They have partnered with Rainbow Concrete Industries.

They are the first licencee to manufacture the piping. The technology uses what is known as geothermal principles to extract heat from under the ground, where temperatures tend to be constant at given depths.

“We as a group thought this up,” said John Hood, one of RRRC's directors. “As far as we know, no one else has developed this yet.”

“An enormous amount of thermal energy (heat) is lost when wastewater flows into sanitary or sewer pipes. The Source-Energy Pipe functions as standard pre-cast reinforced concrete sewer pipe, incorporating a patented heat recovery system that extracts heat energy from the pipe effluent and adjacent ground, returning the energy to heat residential, institutional, commercial and industrial buildings,” stated a release from the company.

A heat pump in the building operates and controls the energy system, transferring heat in and out of the building — heating in the winter and cooling in summer.
Mayor John Rodriguez was on hand for the company's opening. Because the technology involves municipal infrastructure, Greater Sudbury officials had to be involved from the start.

“This city is open for out-of-the-box thinking. That is where the mayor and the council is. That is what has made this possible,” said Rodriguez.

“It all started from some meetings in my office where Boris Naneff and his partners explained this process. I got excited. I have talked to Les Lisk for three years about geothermal energy. It combines the commercial, the public sector and the educational sector. Is that not wonderful?” the mayor said.

Though there have been geothermal systems installed in local homes and in area schools by local companies, this system does not require the space for the piping nor the bore holes required for a conventional geothermal system. Instead, the new technology uses what has to be placed in the ground anyways — the sewer pipes.”

There is potential for significant savings on heating and cooling by home owners, representatives of the company said.

“Energy prices, whether natural gas or electricity, is going up. We all know that. What happens down the road when homeowners get to the stage where energy costs are so high they have difficulty maintaining their homes?” said Hood.

“With this system, the price is constant. Costs do not escalate later.”

He estimated the energy costs for those buildings using the system would actually be up to 10 to 20 per cent lower than installing a conventional heating system.
Hood said the Ontario government is looking at funding more geothermal systems in new schools and that RRRC's system was eligible.

“This technology has been approved by the Ontario Ministry of Education. We just got notice of that three weeks ago. It means that our information is sent out to all the school boards across the province as part of the Request For Approvals Process.”

The technology has the potential of being environmentally friendly, said Hood. If all sewer piping in the city was replaced with the new piping it would replace the equivalent of 260,000 cars in terms of greenhouse gases.

The technology, being developed in the city by local companies like RRRC and Rainbow Concrete Industries could mean a boost to employment in the city, noted Hood.

“It is a whole new product that can fit in anywhere. Our product could be used in green schools across Ontario or even in other countries as a technology export. Hundreds of jobs could be created here.”

For further information, contact Boris Naneff, president of RRRC, at 566-1740 ext. 231 or bpnaneff@rcil.ca.