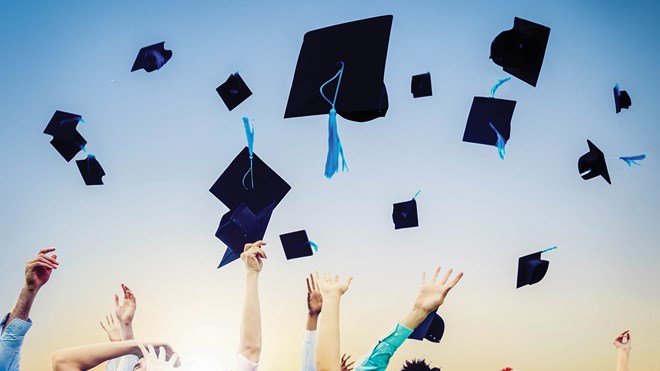 Student leaders are generally pleased with changes to the student aid system announced by the province last week. File photo.

The new Ontario Student Grant — which doesn't come into effect for another 18 months — makes average college or university tuition free for students from families with incomes of $50,000 or less.

The government said it will cover the average cost of university tuition in Ontario, which they said is $6,160.

The government said it didn't include tuition costs for more expensive professional programs in determining its average, instead basing it on arts and science programs.

At Laurentian University — where tuition is the lowest in the province — most programs cost $6,101, said Humphrey.

But when you add on ancillary fees, which includes a bus pass and health insurance, Laurentian students who belong to the SGA pay $6,901. Ancillary fees aren't covered by the new grant.

At other, more expensive universities, the average cost of tuition and ancillary fees together is something more like $8,000, Humphrey said.

Students in professional programs pay even more — tuition for Laurentian engineering students is $7,744, and with ancillary fees, they pay $8,544.

And that doesn't include other expenses, such as residence, a meal plan and textbooks.

The student aid changes are part of a surprise budget announcement last week by the Wynne Liberal government.

The government said more than 50 per cent of students from families with incomes of $83,000 or less will receive non-repayable grants that will exceed average college or university tuition.

Ontario is also increasing access to interest-free and low-cost loans for middle and upper-income families.

To pay for the Ontario Student Grant, the government is cancelling a number of other education tax credits and grants.

But the province promised all students will be the same or better off as under the 30% Off Ontario Tuition Grant, introduced in 2012.

That grant has been criticized for largely excluding mature students, as it's available only to college and university students who moved to post-secondary education from high school within four years of graduating.

The 30% Off Ontario Tuition Grant is also available to students who come from households making less than $160,000 a year.

The revamped system is “a lot more accessible and easy to understand,” Humphrey said.

“I think having students be able to access the funds when they need them really is a lot better than them having to wait until they'd be eligible for tax credits.”

“Knowing that students are going to leave with less debt or debt free is a really big deal,” Champaigne said. “Our students are now going to be overall walking away in a better standing, and not having as much financial stress on them.”

Cambrian has many mature students who were not eligible for the 30-per-cent off grant that now have access to the new grant, she said.

Gabrielle Ross-Marquette, national executive representative of the Canadian Federation of Students-Ontario, said her organization is “celebrating” the changes.

“We do believe it's a victory for students who have been working for many, many years and have been fighting for more upfront needs-based grants,” she said.

“We've been advocating for years that programs such as the 30% off tuition grants or the tuition tax credits did not benefit those who needed it the most.”

Ross-Marquette said she is disappointed the changes won't come into effect until the 2017-18 school year.

“We would really love for students to be able to access this grant as soon as possible,” she said. “However, it's a good step in the right direction.”