The incoming CEO of the Northern Centre for Advanced Technology (NORCAT) said he's impressed by the work done to date at the Sudbury-based innovation centre.
May 3, 2012 7:31 PM By: Heidi Ulrichsen 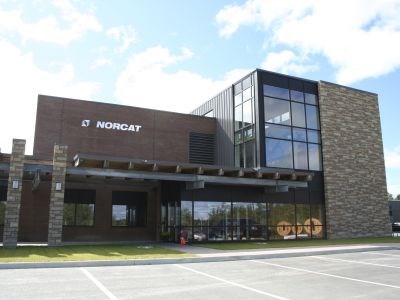 The incoming CEO of the Northern Centre for Advanced Technology (NORCAT) said he's impressed by the work done to date at the Sudbury-based innovation centre.

However, Don Duval said he hopes to expand the mandate of NORCAT, exploring international markets and more sectors.

Right now, much of the work done by NORCAT focuses on the mining industry, including health and safety training for miners and contractors, collaboration on innovative products with local mining supply and service companies and even space mining techniques for NASA.

“With the strong track record of the workplace health and safety product that NORCAT currently offers, you see a great example of an organization that has identified a problem, come up with a solution and proved it in the marketplace,” Duval said.

“It saves lives and reduces injuries. Being part of an organization that has achieved that and understands how to build a business is exceptional ... I think it's a great opportunity for NORCAT to use those accomplishments and its credibility to pursue international markets in new sectors.”

However, he said he plans work himself into his role slowly, consulting with his staff and community stakeholders, and then coming up with a new strategic plan for NORCAT.

“It will give me a good pulse on what is the community looking for, and what role NORCAT can play to ultimately drive a sustainable knowledge economy.”

Duval, who replaces NORCAT founder and former CEO Darryl Lake, who retired March 31, is currently responsible for client services and corporate strategy at MaRS, an innovation centre in downtown Toronto.

He said he's travelled around the world, promoting the innovation centre's work and helping communities with various projects.
MaRS and NORCAT are both members of a provincial network of innovation centres called Ontario Network of Excellence (ONE).

When asked about the work of Lake, who founded NORCAT in 1995, Duval admits he has big shoes to fill.

“I think his accomplishments in driving job creation in the north, engaging the community, creating an exceptional workplace health and safety product and driving the unique business in space technology demonstrates that he has been a strong and capable leader.”

NORCAT board chair Dan Kochanowski said in an April 17 press release that the board is looking forward to working with Duval.

“Don is a dynamic leader who has demonstrated tremendous success,” Kochanowski said. “Don will continue to build upon the success outgoing CEO Darryl Lake has brought to NORCAT, and on behalf of the NORCAT board of directors, I'd like to thank Darryl for 17 years of tremendous leadership.”

Lake said he wasn't on the hiring committee himself, but said if he'd had a say, he probably would have picked Duval as his successor.
“I've talked to Don a few times, and I love his enthusiasm,” he said. “I like what he brings.”

Besides, he jokes, the fact that Duval's first name begins with a “D” doesn't hurt.

“The three of us that started (NORCAT), all of our first names started with 'D,' so that must have been one of Don's qualifications,” Lake said. “(Duval's) first name starts with 'D.' So there you go, Don.”

He said Duval is probably the right person to take “the next step” and bring what NORCAT has to offer to international markets and more sectors, which he said is a “great idea.”

Lake cautions, though, against using a “shotgun approach” when attempting to do so, saying that a “very focused approach” is needed.
The genesis of NORCAT was the downturn in the mining industry in the early 1990s, when nickel was only selling for slightly more than $1.00 a pound.

“All the kids we were training at Cambrian in health sciences, trades and technology were moving out,” he said. “We decided we needed to do something to keep them here or Sudbury will become a retirement community.”

Lake, who at the time was Cambrian's dean of health sciences, trades and technology, set up the innovation centre with help from the college. The organization, which started with three employees, now has roughly 70.

He estimates NORCAT has also helped to create 1,000 jobs in the city through its work with local businesses.

Lake said he hopes Duval is able to carry out a number of “dreams” he has for NORCAT.

For example, he'd like to see the occupational health and safety training offered by the organization become a provincial or even a national standard. He said he also hopes this training will be offered at an international level through the large mining companies operating in the Greater Sudbury area.

Another dream is nothing short of sending NORCAT technology to the moon, something he said is approaching reality through the innovation centre's collaboration with NASA. A piece of machinery nicknamed the “Canadrill” has been designed to search for water on the moon's surface.

While Lake is supposedly retired, he said he doesn't feel like he is yet, as he's still acting a consultant to acting CEO Frank Cinotti. He said he'll also be available to Duval any time he needs help.

“It was a good run, we had some fun, and I know Don will take it in some new directions, and to new heights,” Lake said. “I'll support Don all I can.”