When Derek Diorio was in Greater Sudbury in 2007 and 2008, working on a French-language TFO television show called Meteo+, he would listen to CBC Radio every morning. Diorio, the owner of a production company called Distinct Features Inc.
Dec 9, 2011 9:36 PM By: Heidi Ulrichsen 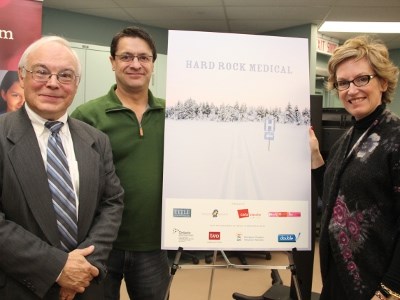 A new TVO show called Hard Rock Medical will be filmed in Greater Sudbury starting in 2012. The show is being put together in partnership with Distinct Features Inc.,Title Entertainment Inc., Carte Blanche Films, and Moody Street Productions. From left are Frank Taylor, president of Title Entertainment, Derek Diorio, president of Distinct Features and Lisa de Wilde, CEO of TVO. Photo by Heidi Ulrichsen.
When Derek Diorio was in Greater Sudbury in 2007 and 2008, working on a French-language TFO television show called Meteo+, he would listen to CBC Radio every morning.

Diorio, the owner of a production company called Distinct Features Inc., began to sense a pattern to the news stories about northern Ontario.

He'd hear stories about either resources such as forestry or mines, or about health care issues such as the shortage of doctors or issues with hospitals.

Then he heard about the Northern Ontario School of Medicine (NOSM), which opened in 2005 in an effort to produce home-grown doctors to tackle northern Ontario's doctor shortage head-on.

A light went off in his head.

“I thought 'This is a perfect thing. You don't have to force this. This is a great story to follow,'” he said. “I looked into the medical school, and it's unique. The pieces are there to tell a really great story.”

Diorio began working on developing a new, half-hour drama series called Hard Rock Medical that follows a group of medical students at a school roughly based on NOSM.

The TVO-commissioned show is due to be filmed in the Greater Sudbury area beginning in March 2012, and aired on the network in 2013.

TVO has received $1 million from the Northern Ontario Heritage Fund Corporation to support the production.

Like real-life NOSM students, the Hard Rock Medical characters will at times travel to remote, northern communities to learn about practising medicine. Medical school officials were consulted as the series was developed.

“One of the unique things about NOSM is that within six weeks, first-year students are in the field with a mentor. That's kind of a story line. We're taking these people on everything from moose hunts to the mines to old folks' homes — the stuff that's actually going on at NOSM.”

“What we seem to have done is find a wrinkle in a genre that's very popular,” he said.

Although it's a drama, Diorio said the show will be funny.

“There's everything from gallows humour in medicine to situational humour,” he said. “There's not going to be set-up punchlines. It's going to be character-driven humour.”

Without the support from NOHFC, the show wouldn't exist, as the funding amounts to a quarter of the show's budget, Diorio said.

The show is being put together through a partnership with Diorio's company, Distinct Features Inc., along with Title Entertainment Inc., Carte Blanche Films, and Moody Street Productions. Besides TVO, Hard Rock Medical will also appear on the Aboriginal Peoples Television Network.

Minister of Northern Ontario Development and Mines and Sudbury MPP Rick Bartolucci, who made the funding announcement, said while the show is in production, it is expected to create 200 jobs.

“Over a period of just a few years, the Ontario government has made a significant investment to help northern Ontario's film and TV production industry get established and grow,” Bartolucci said, in a press release.

“I'm excited by the potential of this new series to raise our region's profile, and to continue to contribute to Sudbury's economy through production jobs and support services.”

TVO normally focuses on current affairs programs and documentaries, but “from time to time, a drama series can be an equally potent way to spark a conversation and to knit the province together,” Lisa de Wilde, the CEO of TVO, said.

Hard Rock Medical will give people who don't live in northern Ontario a glimpse of some of the issues facing this part of the province, she said.

“Without exaggerating, without this funding (from the NOHFC), this project wouldn't be possible,” she said. “So thank you very much.”