The Sudbury chapter of CARP (Canadian Association for Retired Persons) hosted a senior's debate for Nickel Belt candidates on Oct. 1, in conjunction with National Senior's Day.
0
Oct 2, 2015 1:41 AM By: Matt Durnan 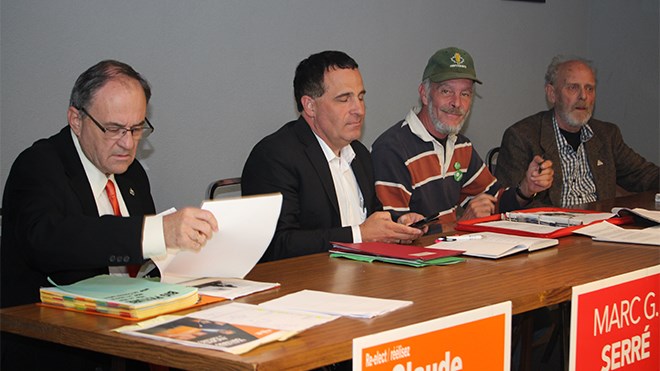 Four candidates attended, to hear questions from the roughly 35 people in attendance at the Sudbury Legion on Long Lake Road, while CARP chair Hugh Kruzel handled the mediation duties.

Gerry Labelle posed questions that were open for each candidate to take up to 90 seconds to answer.

The format for the evening was less a debate and more an open discussion where each candidate was afforded the opportunity to answer questions one at a time.

Keeping in tune with the Legion playing host, the evening was kicked off with a question regarding Canada's veterans and what each candidates' party was going to do to former soldiers.

“There should be a standard policy for all veterans with regards mental health support,” said Gravelle. “It is expected that many of these people are coming back with both physical and mental illness and we need to be supporting these people.”

Starbuck had to be cut off by Labelle when he opened his answer with, “Stephen Harper's abonimable record with regards to veterans...” and was quickly cut short when Labelle asked, “your points about Prime Minister Harper are heard, what will your party do?”

Starbuck rebutted that it was his party's stance to not have Canadian soldiers fight in American wars of aggression.

Serré stated that it was the Liberal's plan to re-open the veteran's services office.

“We want a world class centre for soldiers who are dealing with post-traumatic stress disorder,” he said.

The second discussion point was centred around the environment, and how each party plans to protect the environment through sustainable energy sources.

Stuart McCall led off speaking about solar panel installations happening in Capreol and plans for wind farms located away from residential areas.

“We have the capability to extract geothermal heat from mines, and while providing a source of heat we can also help mines reduce their environmental footprint,” said McCall.

“We need to eliminate the billions of dollars in subsidies to fossil fuels,” said Gravelle. “Geothermal heat can certainly be used to heat our homes and our water but our reliance on fossil fuels has to end.”

The final question posed by Labelle was regarding senior homelessness and how to combat the issue.

“The Liberals have committed $20 million for the next four years to start now not four years from now, not when the budgets are balanced, to invest in social housing as soon as we're elected,” said Serré. “What needs to happen is we need to sit down with municipalities and see what their priorities are in different areas.”

McCall spoke about the need to make homes more energy efficient in an effort to save money on energy bills.

“We're looking at a home retrofit program, where leaky windows would be plugged up and energy consumption would be reduced,” said McCall.

Starbuck addressed the importance of not only housing but food for seniors, along with assisted living facilities.

“We need to stop paying the rich and start investing in social programs for seniors.”

The NDP, according to Gravelle, is the only party with a national housing strategy, along with a commitment to build co-op seniors housing, while making mention of eco retrofit program that McCall spoke of.

“I had people come into my office telling me that they had to block off their bedrooms so that they could afford to heat their house,” said Gravelle. “They have to pick between heating their house and eating and that should not be the Canadian way of doing things, we are committed to bringing back the eco retrofit program.”

The public question period touched on several topics, including gas tax credits, public transit, senior employment grants, and perhaps the most sensitive subject that was covered on the evening, right to die, where each candidate spoke from the heart, while in some cases sharing personal stories.

“Seniors should have the right to die in peace and quiet and with family and friends,” said McCall. “We can have physicians do that and we should introduce legislation to do that.”

Gravelle wasn't evasive in answering but was certainly not leaning to one side, stating that if legislation were to be brought forward he wouldn't be sure how he would vote.

“It's a touchy subject, but I can relate to you a personal story about my mom who passed away in 2003 at Pioneer Manor and I think I can safely say that she didn't die a very peaceful death,” said Gravelle.

“But with better palliative care she could have, my father died a very peaceful death because of the palliative care that he was getting so that's where we have to concentrate our energy and make sure that seniors can die with dignity. I think if we do that with palliative care, the right to die issue is going to settle itself.”

Serré explained that there is a way to fight within government as an MP to make sure that there is proper legislation in place for seniors to die with dignity.

“I will support a bill that has comprehensive views and education to make sure that it is the individual's right to do with proper measures,” said Serré . “I met with an elederly lady the other day who was concerned with this issue and said she wasn't for this and was afraid that it could be a means to terminate quickly, but it's our responsibility as an MP to make sure that there is a proper medical diagnosis and for someone who is terminally ill there are proper criteria in place.”

Starbuck was the final candidate to speak on the issue of mercy killing, making mention of his mother passing away not more than two weeks ago.

“My mother had a heart attack just before Labour Day and she just wasn't the same after that during those three weeks, the week in the hospital then two weeks back in the nursing home, so this was a question that you don't want to deal with but it does come up,” said Starbuck.

“I saw my mom and mentally she just wasn't the same and physically she just didn't have any strength and you're seeing them there and you really feel for them but there's not a heck of a lot you can do. If someone has the ability to live with dignity and move themselves around and take care of themselves is one thing, but if I'm just strapped to a gurney somewhere hooked up to tubes I don't want that. People have to decide for themselves but I don't want that for myself, and people have to make these decisions.”