Current nickel prices of a little more than $7 a pound are comparable to $2.50 a pound a decade ago, creating huge challenges for Sudbury’s largest nickel miner.
0
Apr 16, 2013 7:47 PM By: Sudbury.com Staff 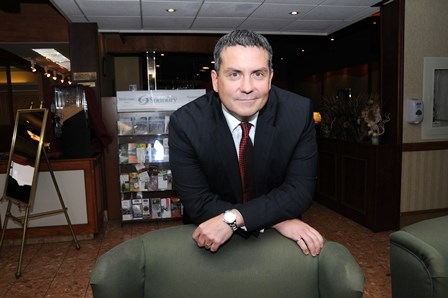 Kelly Strong, Vale’s vice-president of Ontario and UK operations, addressed a packed luncheon at the Howard Johnson in Sudbury on Tuesday, where he outlined the company’s future plans for its local operations. Marg Seregelyi photo.

Current nickel prices of a little more than $7 a pound are comparable to $2.50 a pound a decade ago, creating huge challenges for Sudbury’s largest nickel miner.

Kelly Strong, Vale’s vice-president of Ontario and UK operations, made the comparison Tuesday at a packed luncheon at the Howard Johnson in Sudbury, hosted by the Greater Sudbury Chamber of Commerce.

Strong said several factors have substantially increased mining costs, including oil prices that have increased by 350 per cent, and the Canadian dollar, which has increased in value by 60 per cent compared to the U.S. dollar.

“Today’s prices are actually as low as historical recessionary prices,” Strong said. “And those of us who lived through those price cycles know how challenging they were.”

He also paid tribute to three miners who were killed on the job at Vale – Jordan Fram, Jason Chenier and Stephen Perry. Strong said the company has gone through a dark period and has put a renewed emphasis on safety.

He said efforts are focused on getting accident rates down to what they call ALARA – or, “as low as reasonably achievable.”

“As a result of these efforts, and by working closely together, I’m pleased to report to you that in 2012, our operations achieved its lowest injury frequency rate in the history of the company,” Strong said. “It’s an achievement we’re very proud of.”

On the business side of Vale’s operations, he said in addition to higher costs, the company is facing unprecedented global competition. China, for example, is producing more nickel now than ever. In particular, it’s producing nickel pig iron, a low-cost nickel substitute.

Added to the company’s challenges are tighter environmental rules in Canada, which he referred to as “the almighty green.”
“Faced with the new reality … we have two options: adapt and position ourselves for a more competitive future, or continue doing things the way we always have and hope for the best.

In tangible terms, Strong said that change means rather than striving to be the biggest producer in the world, Vale now wants to be the best, with an eye on long-term success. Key to that goal is reducing operating costs, which they’ve done by closing unprofitable mines such as Frood. They’ve also reorganized, with more of a regional focus.

“This structure will give each operation, including our own, much more autonomy to focus on delivering results,” he said. “Unfortunately, this has meant a reduction in some roles, particularly in support and service functions globally and here in Sudbury.”

Key to maintaining Sudbury operations, he said, are capital investments to allow them to access nickel deeper underground, since the easily accessible ore has already been mind. Since 2007, when Vale bought Inco Ltd., Strong said the company has invested $2.7 billion in local operations, including $800 million in 2012 alone.

“That is about the cost of building eight hospitals the size of Health Sciences North,” he said.

“As an aside, $2.7 billion also happens to be the approximate net worth of Oprah Winfrey,” he quipped, generating a big laugh from the crowd.

He said the company’s supply and service purchasing since 2009 totals $2.6 billion, including close to $1 billion last year alone.

“Supplies and services purchased from local vendors in Sudbury, Chelmsford, Dowling, Coniston, Hanmer and so on,” Strong said. “If we factored in surrounding areas such as Elliot Lake, Espanola and Timmins, that figure would be significantly higher.

He cited a number of specific projects, including a $200-million investment at the Clarabelle Mill that will lead to a four-per-cent increase in the amount of nickel they extract from every pound of ore. The project created 200 new jobs at its peak.

“We are also getting very close to finalizing work on our Totten Mine project, the first new Vale mine in Greater Sudbury in 40 years.”

When the $760-million project comes into production 2014, it will produce nickel, copper and platinum group metals. In all, 500 people worked bringing into production, and 160 will work there over the mine’s 20-year lifespan.

Strong also talked about Vale’s decision to halve its Clean AER program from $2 billion to $1 billion. With a smelter coming online in Voisey’s Bay, Vale will reduce the Copper Cliff smelter from two furnaces to one by 2016.

“Most significantly, it will mean that we will be able to achieve a better environmental outcome than originally planned at approximately half the capital investment,” he said. “The Clean AER project still represents the largest single environmental project ever implemented in the Sudbury Basin. In the coming years, the project will reduce emissions of sulphur dioxide by a staggering 85 per cent from current levels in Sudbury.

“To me, there is no better example of true sustainable development for our business, our employees and our community.”