Noront Resources: Bogged down in the Ring of Fire 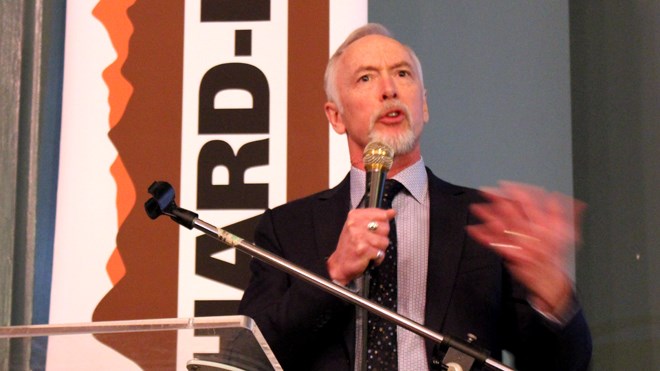 Alan Coutts gave an update on the Ring of Fire at a Greater Sudbury Chamber of Commerce Luncheon. Photo: Ella Myers

Noront Resources boss Alan Coutts said his company is as committed as ever to the Ring of Fire.

But if things don't get moving soon, their financiers and investors are going to lose patience.

“We're trying,” said the Noront president-CEO at a Greater Sudbury Chamber of Commerce luncheon, Jan. 26. “My focus has always been on the Ring of Fire.

Coutts said that the project is stalled at two points: They need a permanent road to their remote nickel and chromite deposits in the James Bays lowlands, and; they need approval on that road from the neighbouring communities belonging to the Matawa First Nations tribal council.

The past two years have seen Noront consolidate their presence in the Ring of Fire camp, a crescent-shaped string of chromite, nickel, copper and platinum group metals deposits covering an area roughly the size of the Sudbury basin.

“It's pretty well all Noront,” Coutts pointed out during his presentation.

The small Canadian resource company acquired the claims of Cliff Natural Resources and MacDonald Mines in 2015 and 2016, respectively.

Noront is currently planning on starting construction on their Eagle's Nest mine site in 2018, followed by work on their Blackbird chromite deposit.

To proceed with construction on Eagle's Nest, they need a road to the inaccessible site to start around the same time.

However, they are waiting on the Ontario government to make a decision on the route, and to release the $1-billion commitment the province made toward mining-related infrastructure that would cover the cost to build the road.

They also need approval from the communities who want to share the road.

The company’s engagement conversations with Marten Falls and Webequie are “progressing well” and are just starting with Neskantaga.

While that “conversation has to happen,” Coutts said the project is getting tied up by the slow pace of the regional framework process between the provincial government and Matawa, along with the larger national Indigenous issues of reconciliation, treaties and land jurisdiction.

“The issue we have is we're not part of that larger Canada-wide issue,” said Coutts. “There's a lot of discussion beyond resource development.”

Coutts said they are committed to a mutually beneficial arrangement and a positive environmental legacy.

Eagle's Nest would store mine tailings underground, for example, and a “significant number” of their exploration crew are from Webequie and Marten Falls.

Roughly 60 per cent of the workforce at the site is First Nation.

“I think they way to address this issue is to have a joint vision of resource development,” said Coutts, but he needs to demonstrate to investors there is some positive momentum for the project and to generate revenue for Noront.

Sudbury business man creates alcohol-free hand sanitizer
Sep 23, 2020 8:00 PM
Comments
We welcome your feedback and encourage you to share your thoughts. We ask that you be respectful of others and their points of view, refrain from personal attacks and stay on topic. To learn about our commenting policies and how we moderate, please read our Community Guidelines.