Martin Bayer doesn’t mince words when discussing the mandate of the Northern Policy Institute. There’s no point in wasting money on research papers if that work sits unused on a shelf somewhere, he said.
Sep 19, 2013 3:53 PM By: Lindsay Kelly - Northern Ontario Business 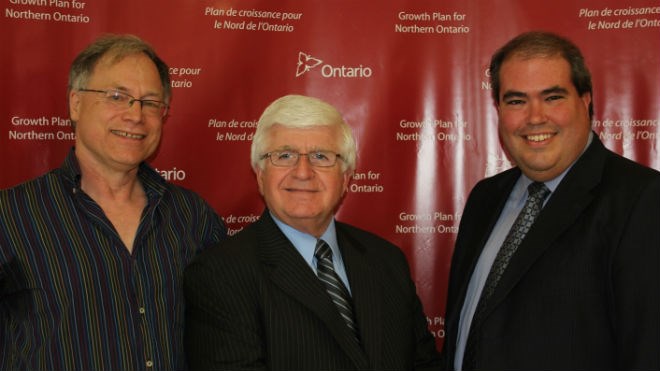 The Northern Policy Institute must focus on relevant, evidence-based research on the challenges facing Northern Ontario, according to chair Martin Bayer. From left, Laurentian University economics Prof. David Robinson, Sudbury MPP Rick Bartolucci and Laurentian president Dominic Giroux were on hand for the institute’s launch in August 2012. Supplied photo.
Martin Bayer doesn’t mince words when discussing the mandate of the Northern Policy Institute. There’s no point in wasting money on research papers if that work sits unused on a shelf somewhere, he said.

“I think we have to make sure we don’t allow ourselves to be yet another organization that generates more research papers with some recommendations that never get implemented or simply aren’t practical,” said Bayer, a Sudbury-based lawyer who was appointed the institute’s chair in February. “We want to be careful about that and be sure that if we are commissioning research and it’s evidence-based, it’s relevant, it’s going to be meaningful and it’s going to be used.”

As one of the primary recommendations to come out of the province’s 2011 Growth Plan for Northern Ontario, the institute has been charged with the development of policy options that reflect challenges faced by Northern Ontario and that foster sustainable development and long-term economic prosperity.

Bayer outlined the institute’s mandate, priorities and work to date during a luncheon sponsored by the Greater Sudbury Chamber of Commerce on Sept. 17.

Its immediate goals are to develop an operating budget, outline its five-year business plan and determine its priorities. It has to be selective in its focus, since it can’t work on all the Growth Plan’s recommendations, Bayer said, noting that no researchers will be on staff at the institute, but rather targeted research will be commissioned.

Bayer is one of 10 board members—comprised of people from across the North with a diverse range of backgrounds—who were selected last February; its chair, Charles Cirtwill, was hired in July. Laurentian University president Dominic Giroux and Lakehead University president Brian Stevenson were named the institute’s special advisors.

Although approved for $5 million in seed money by the Northern Ontario Heritage Fund Corp., Bayer said one of the institute’s long-term goals would be to become financially self-sufficient so as not to remain beholden to the province for its operations capital. He estimated it could take a decade before becoming truly self-sufficient.

“It’s always better when you don’t have to rely on government funding because it’s one less thing you’ve got to pay for as taxpayers,” Bayer said. “And, more importantly, you’re unshackled from the cumbersome terms and conditions that often govern the delivery of your programs and services and the mandate that you have.”

Cirtwill will move back and forth between offices at Lakehead and Laurentian to maintain a presence in both communities. Bayer also vowed the board would meet in other communities across the North—Sault Ste. Marie, North Bay, Timmins—both to create transparency and hear from northern stakeholders about their areas of priority.

He emphasized the need for communities and groups to stop working in silos in favour of collaboration.

“If we’re going to advance ourselves and truly work together, we’ve got to recognize sometimes these divisions that float around we create for ourselves, and our all of our work isn’t made easier by creating these artificial divisions between our communities,” he said. “Over time we’ve got to get past that and really start to work truly together.”

For example, Bayer said he could see Northern communities working together on common areas like insurance, auditing services or benefits programs management.

The institute also needs to focus on policies that ensure Northern Ontario is seen as attractive and friendly to investment in what Bayer deemed to be “an increasingly global, competitive environment.”

He said the institute may also have a role as watchdog to ensure the Growth Plan isn’t forgotten.

“We’re going to be in 2014 soon and next thing you know the thing’s already going to be three years old,” he said. “I think there could be an important role played by the Northern Policy Institute to ensure that the important work that is done in that Growth Plan, and especially the recommendations and options that are there, are not just sitting on a shelf somewhere.”

Bayer emphasized the responsibility shouldn’t just lie with the institute, however; all Northern Ontarians are charged with responsibility of ensuring policy-makers are held accountable in implementing any recommendations for the North.