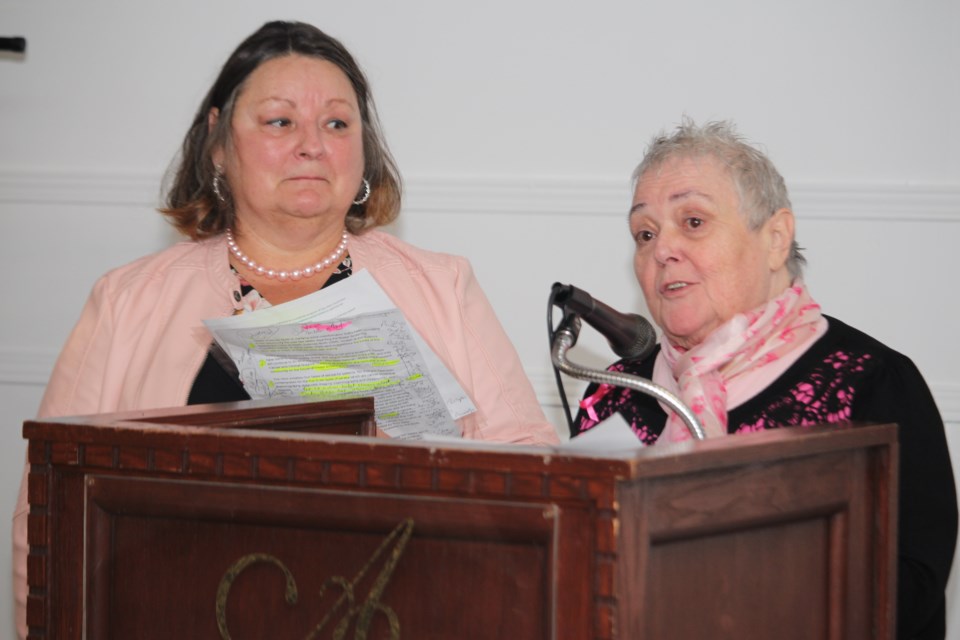 Health Sciences North administrators say it’s a done deal, but Anne Matte just will not give up.

A registered nurse, Matte was one of a group of mostly women who two decades ago helped establish the Breast Screening and Assessment Service at what is now Health Sciences North.

It was ground-breaking when Matte, Sharon Murdock and dozens of other women proposed breast screening and breast assessment, which were being done in separate locations, be rolled into one to streamline the experience of women facing their most common form of cancer.

The Breast Screening and Assessment Service offered women, and a handful of men, a seamless journey from breast mammogram or other diagnostic showing abnormal results to in-house surgical consultations, biopsies, breast surgery, and chemotherapy or radiation if required.

The service cut by weeks the wait time from when women met with surgeons to the post-operative period when they started chemo or radiation. That was because surgeons were seen in house on one of six to eight clinic days a month at the service, located at the former Sudbury Memorial Hospital site.

It greatly reduced the period most stressful to women facing breast cancer – from when lumps or irregularities were found to when they consulted with surgeons to learn what they were facing in terms of treatment and outcome.

Twenty years ago, women formed the Breast Action Coalition, which lobbied for the one-stop centre that offered women more than easy access to all things related to breast cancer. The Breast Screening and Assessment Service was staffed by nurses who were available to patients and worried family members who had questions about next steps in the process and who helped them navigate their way through it.

As important as hard services was the camaraderie that developed among women facing potentially deadly diagnoses and the support that was in place to help them cope with one of the biggest challenges of their lives.

That is set to change at the end of the year when Health Sciences North cuts almost in half the number of clinic days at which surgeons consult with patients at the BSAS at the Sudbury Outpatient Centre.

Earlier this year, breast surgeons were told by HSN administrators that consultations with patients would have to be moved into their offices in the community rather than be held at the HSN clinic. OHIP pays for consults in doctors’ offices, but surgical clinics at BSAS are funded by the hospital. HSN is cutting and trimming wherever it can to reduce an $11-million deficit.

Months ago, surgeon Dr. Rachelle Paradis expressed the concern of hers and her colleagues that women would end up waiting longer for breast consultations because they would have to be fitted into surgeons’ general practices in the community.

HSN was looking to trim $270,000 by changing what it says is just one element of a comprehensive breast program. Months of negotiations with surgeons, letter-writing campaigns by people fiercely loyal to the clinic and protests by dozens of people have caused HSN to reconsider. HSN is now agreeing to hold one clinic day a week for women for whom there is a high suspicion of breast cancer. The previous eight clinic days a month that were scheduled were under-utilized last year, which was not a good use of hospital resources, said Mark Hartman, former vice-president of cancer and clinical support at HSN.

Matte, Murdock and others who protested the changes to BSAS are somewhat relieved the most severe cases will still be seen at the hospital clinic -- and quickly. But Matte is worried about the change of criteria for referrals in-house and how that will change.

The women have formed a new group – the Breast Assessment Coalition – to keep a close eye on how changes may affect patients. Matte and coalition members are reaching out for volunteers to serve as president, secretary, treasurer and communications officer for the coalition.

“We need new blood,” said Matte of the call for people, particularly younger ones, to get involved in the coalition.

It will meet for an election of officers Thursday from 6-8 p.m. in meeting room one in the basement of the Mackenzie Street branch of Greater Sudbury Public Library. The public is invited to attend.

The coalition is urging people who will be “rejected” for consultation at the Sudbury Outpatient Centre to contact it so it can follow their cases when the program is cut back next year. The coalition and surgeons fear women’s wait times to see surgeons will increase because their appointments will have to be scheduled among the many other patients whom general surgeons see.

A breast cancer diagnosis is life-changing and, “it’s life-ending if it’s not diagnosed” in time, said Matte.

Mammograms miss 15 per cent of breast cancers “right off the bat,” said Matte, and the statistic is higher among women under 50.

Carol Mulligan is an award-winning reporter and one of Greater Sudbury’s most experienced journalists.

Porter Airlines deferring resumption of service until at least July 29
May 27, 2020 4:00 PM
Comments
We welcome your feedback and encourage you to share your thoughts. We ask that you be respectful of others and their points of view, refrain from personal attacks and stay on topic. To learn about our commenting policies and how we moderate, please read our Community Guidelines.