In Sudbury.com's first piece of long-form journalism, our team of reporters digs into how it all started and the legacy of this bitter chapter in Greater Sudbury's labour history
Jul 22, 2019 2:43 PM By: Sudbury.com Staff 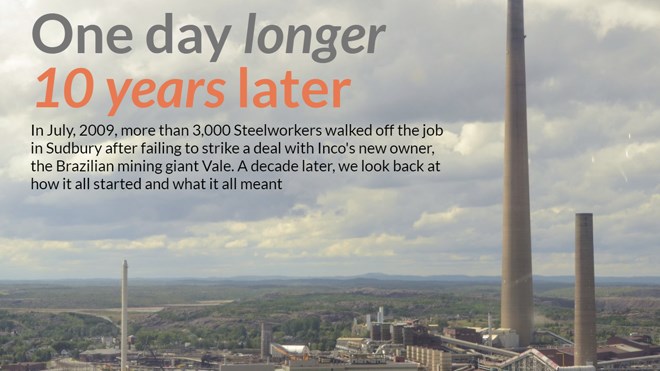 A new foreign-owned multi-national was in control of what had been a Canadian giant of a mining company. It had an agenda to it said was necessary to keep the company profitable.

A powerful union saw a huge company that appeared to want to roll back job gains that had taken decades to achieve.

And so the stage was set for a major clash.

Writers Matt Durnan, Darren MacDonald, Carol Mulligan, Arron Pickard and Heidi Ulrichsen tackle various aspects of the story from the labour and market conditions that led to the strike, to its impact on the economy and the social fabric of Greater Sudbury, to the legacy we're left a decade after a deal was struck.

Meanwhile, through archived footage and photos, new media reporter Heather Green-Oliver takes us back 10 years with pictures and video to breathe life into a year-long battle that held the city in its grip.

We even catch up with some of the main players to find out where they are at 10 years later.

Incorporating photos, video and graphics into a unique design, and separated into chapters for easy navigation, One Day Longer, Ten Years Later is a deep dive into the Vale strike, presented in an entirely new way.

Click here to read the story. (This link is no longer active.)