Ontario is falling behind as a mining jurisdiction, agreed several industry players who participated in a consultation forum organized by the Ministry of Northern Development and Mines Wednesday.
Mar 20, 2015 1:33 PM By: Jonathan Migneault 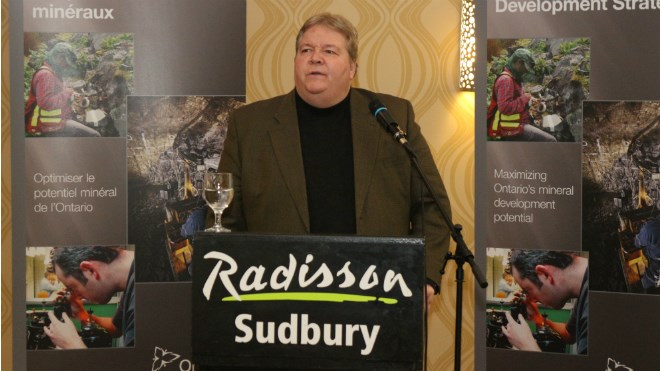 “There's no tacit recognition by this provincial government that it believes in mining,” said Gino Chitaroni, president of the Northern Prospectors Association.

Chitaroni said that while the province has shifted its focus to the Ring of Fire – where development has advanced at a glacial pace, according to the Ontario Chamber of Commerce – other parts of the province have been neglected.

“We have a lot of projects out there that could be economic very shortly, but we have to encourage them,” Chitaroni said. “I don't see it happening.”

He said he could think of eight to 10 mining projects in eastern Ontario alone, that would be viable with some investment, and much easier to access than the remote Ring of Fire.

While legacy mining jurisdictions like Sudbury continue to do well, Chitaroni said, other parts of the province don't have those advantages.

The province established the strategy in 2006, and according to Northern Development and Mines Minister Michael Gravelle, has been due for an update because of different market conditions and changing technologies.

“Everyone is having a hard time raising capital,” said Rob Merwin, an executive adviser with the ministry, who mediated the consultation session.

Merwin said the stakeholders he has met so far all want the same things.

“They want certainty of costs,” he said. “That includes infrastructure costs and the costs related to electricity.”

Junior miners and prospectors want more incentives to cover the costs of exploration and help attracting investments when projects are at the early stages.

Ontario fell nine spots on the list, which included 122 mining jurisdictions around the world, compared to the previous year, placing 23rd for attractiveness to investors.

He said incentives for large industrial producers, which cut the hydro rate to two cents per kilowatt-hour for producers who use more than 50,000 megawatts, are flawed.

“We came in at 47,000 megawatts,” he said about Wesdome Gold. “It actually makes sense for us to plug in heaters to get that extra six per cent consumption so we can get a 16-per-cent discount.”

Ng said producers with high-grade deposits, like Wesdome, are “punished” because their deposits use less energy to mill, which means they can fall short of the industrial hydro incentives when compared to less efficient operations.

George Darling, the mine technical services director with SNC-Lavalin, said Ontario lags behind many of the jurisdictions he has worked in over the course of his 40-year career.

He said regulations for mining companies are more clear cut in jurisdictions like Madagascar, New Caledonia and Australia.

“Mining companies (in Ontario) just don't know where they're going anymore,” he said.

In Madagascar, Darling said SNC-Lavalin is building a $1.2-billion smelter. The smelter will process nickel oxides that were discovered 10 years ago, and developed within four years, he said.

“If we don't become competitive again other countries are going to take over,” Darlin said. “We'll be wondering why all our kids are working overseas.”