Ontario Mine Rescue is in talks to form a partnership with the Ontario Provincial Police's urban search and rescue teams.
Feb 12, 2015 3:39 AM By: Jonathan Migneault 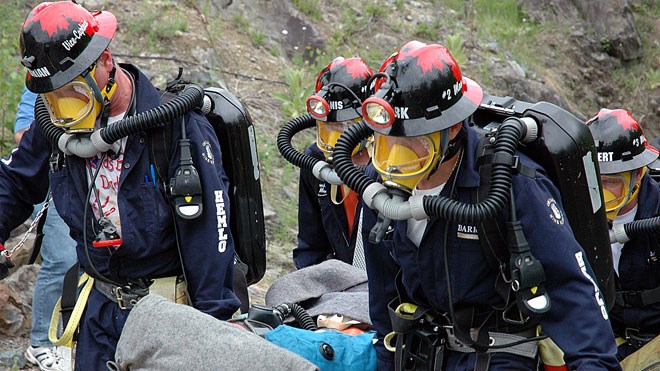 While discussions to partner with Toronto's Heavy Urban Search and Rescue Task Force have ceased, Ontario Mine Rescue has instead been in talks with the OPP to collaborate with the force's urban search and rescue teams when appropriate. File photo.
Ontario Mine Rescue is in talks to form a partnership with the Ontario Provincial Police's urban search and rescue teams.

The organization, which responds to an average of three calls a month, mostly related to underground fires from electrical systems or mobile mining equipment, was previously in talks to initiate more collaboration with Toronto's Heavy Urban Search and Rescue (HUSAR) Task Force.

But according to Alex Gryska, Ontario Mine Rescue's director, those discussions have ceased.

The two organizations previously teamed up in 2011 when a tornado flattened buildings at the Sifto Salt Mine in Goderich, killing one employee.

After the 2012 Algo Centre Mall collapse in Elliot Lake – which killed two people – some of the city's residents criticized HUSAR for not reaching out to Ontario Mine Rescue and use its expertise to search through the mall's rubble.

Mine Rescue consists of a network of 875 highly-trained and respected volunteer miners stationed at 40 underground mines across Ontario, including about 200 more at various open pit operations.

Formed in 1928 after the Hollinger Consolidated Gold Mine fire killed three dozen Timmins miners, the organization boasts a stellar international reputation for safety and high standards of training. No volunteer rescuer has ever been killed and no endangered miner has ever been left below ground.

While a partnership with HUSAR hasn't worked out, Gryska said the OPP-partnership could prove to be beneficial for both parties.

“They've come in to understand more fully what we're all about,” he said.

Gryska said because each emergency situation is different, police would need to determine on a case-by-case basis if Mine Rescue's responders are the best fit for a job.

He said they have made inroads to educate the OPP on their skillsets and equipment.