France Gélinas said she knew something fishy was going on with the province's air ambulance service, ORNGE, when she heard stories about helicopters from southern Ontario being sent to pick up accident victims in Gogama.
0
Jan 14, 2012 7:40 PM By: Heidi Ulrichsen 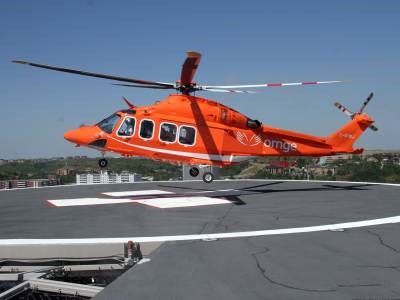 An ORNGE helicopter takes off from Health Sciences North this past August. The president and CEO of the air ambulance agency is on indefinite medical leave after it was revealed last month he makes $1.4 million per year. File photo.

France Gélinas said she knew something fishy was going on with the province's air ambulance service, ORNGE, when she heard stories about helicopters from southern Ontario being sent to pick up accident victims in Gogama.

“You would expect the air ambulance from Sudbury that sits at the Sudbury airport to go,” the Nickel Belt MPP said.

“But no, the dispatch that was handled by ORNGE would send us a helicopter from Hamilton or Toronto or from somewhere down south, when the one from Sudbury was not busy. It was like, what was going on?”

An investigation by the Toronto Star revealed ORNGE president and CEO Dr. Chris Mazza is paid $1.4 million per year.

ORGNE, a non-profit agency, has created various for-profit companies. These companies, in effect, shielded Mazza and other ORNGE officials from their salaries being published under the Public Sector Salary Disclosure List.

Gélinas, who calls the situation at ORNGE a “mess,” said she suspects air ambulances were sent to northern Ontario from the south because they were owned by one of these for-profit companies.

“Logic would tell you they were dispatching an air ambulance that he owned from a private business,” she said.

“They get paid every time they fly. It looked like the needs of the patients was not what was driving the decision as to which ambulance we use.”

Every time the NDP would ask questions about ORNGE, they were stonewalled by the government, Gélinas said. She said she is convinced they knew what was going on for a long time.

Back in 2010, former NDP leader Howard Hampton asked the government questions about ORNGE for 20 minutes straight, but got nowhere, she said. “We couldn't even get a peep out of them about ORNGE.”

Mazza has been on indefinite medical leave from ORNGE since late December, after the Toronto Star stories ran.

On Jan. 11, Minister of Health Deb Matthews announced ORNGE's board of directors, at the recommendation of the government, had appointed Ron McKerlie as the organization's new president and CEO.

“Mr. McKerlie, who is being reassigned from his most recent post as Deputy Minister of the Ministry of Government Services and Associate Secretary of Cabinet, brings a demonstrated track record of leadership when it comes to improving transparency and accountability in the broader public sector,” Matthews said, in a press release.

The organization is also replacing its board of governors. Matthews said she is looking forward to working with the outgoing board “to ensure an orderly transition to a new board in the days to come.”

Matthews also said in the press release she has ordered a forensic audit of ORNGE.

Gélinas said the results of the forensic audit will not be made public. “It will only be given to the minister,” she said.

She said the situation “looks very much like” the eHealth scandal. In that case “we spent $1 billion, and we still don't have an electronic health information system,” Gélinas said.

The province's Progressive Conservatives are also speaking out about the issues with ORNGE.

“The mess at ORNGE has many Ontario residents seeing red,” Progressive Conservative MPP Frank Klees said, in a press release. “When I stood in the legislature and called for answers and action, ORNGE jumped in to shut me down by threatening a lawsuit...