Greater Sudbury operations committee chair and Ward 5 councilor Robert Kirwan came under some fire from his fellow councilors and board members on Monday during a committee meeting.
Jan 19, 2016 2:00 AM By: Matt Durnan 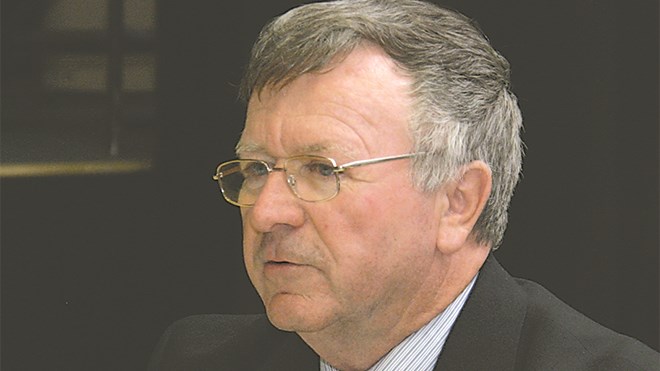 It wasn't an agenda item that caused a stir however, but an item that committee vice-chair Evelyn Dutrisac felt had been left off of the agenda entirely, and without any consultation with other committee members.

Thomas Price, who spent 40 years working in the engineering field, 35 of which were spent working for Inco, had submitted a written request back in the fall for council to hear his presentation.

Price had originally requested for a one hour block of time for his presentation but was told his limit would be 10 minutes, which was later shortened to a maximum of five minutes.

“In discussing the agenda for tonight with staff a number of things came up, that in my view, made it inappropriate for tonight,” said Kirwan.

Kirwan's somewhat vague response was met with the question, “if not tonight, then when?” from Dutrisac, to which Kirwan provided little insight.

“At this point there hasn't been any consideration as to when,” said Kirwan. “It was just deemed that it wasn't appropriate for tonight. I can't give any other reason, I'm sorry I just can't divulge it.”

Ward 2 Coun. Michael Vagnini felt that members of the committee were owed an explanation as to why the presentation was left off the agenda.

“As everyone is probably aware I have a relationship with Mr. Price so I tried to stay completely out of it and I wasn't involved in setting up the initial presentation, but now it concerns me that we've been here for a year and we've seen the cost benefit analysis but we have not seen the business case on Maley Drive,” said Vagnini.

Ward 3. Coun. Gerry Montpellier was candid when speaking about an apparent lack of transparency within the operations committee.

“My comments have nothing to do with Maley Drive but I'm actually a little offended that I belong to a committee that goes around telling me that I can't be divulged of why something's been changed, or was omitted or brought in,” said Montpellier.

“The fact that I hear you're not privy or we can't divulge why something has been happening one way or the other and that truly is my comment.”

Kirwan corrected himself for using the word divulge and explained that he was not prepared to provide an explanation other than he had discussed the matter with staff and it had been decided that the presentation would not be held during the Jan. 18 meeting.

“I don't believe that the agenda was officially approved or published or changed, it was just a decision that was based on a discussion with staff,” said Kirwan.

Vagnini stood by Montpellier's comments, adding that he was surprised that this would happen at all.

Ward 10. Coun Fern Cormier had the city's procedural bylaw on-hand and wasn't shy about pointing out what he perceived to be loopholes that needed to be looked at.

“Without getting into the specifics of what was raised here because I don't know the background, and it would seem, mister chair, with all due respect that there is something that certain members might privy to that the rest of the members are not. I'm not sure under what section of a bylaw or municipal act where that would seem reasonable, but pointing to our own governing procedural bylaw, article 6.01 sets out the chair's authority,” said Cormier.

“I'm not criticizing the events that have happened here but I'm pointing out some loopholes that perhaps we'll have to look at with our own governance bylaw because article 6.01 does not speak to the chair having anything to do with setting the agenda.”

Cormier went on to explain that the procedural bylaw is “silent” on the issue of the exact situation that the committee was faced with on Monday evening.

“It talks about community delegations, it talks about the process by which those are to be followed and I know that in the past we err on the side of democracy and allow community delegations because information is never a bad thing and there's no such thing as too much information. In this particular case it would seem as though that mechanism was short circuited,” Cormier said.

Kirwan said that his understanding was that the agenda was never approved with the presentation on it and had never been set to include Mr. Price's presentation.

“It had never been published with it on it so it had not been announced as an agenda so it wasn't unilaterally pulled, it was in discussion with staff, and I agreed that this was not a good time to have the presentation,” said Kirwan.

“Nothing was done contrary to the procedural bylaw I can assure you, we had discussed about hearing the presentation at this meeting but it was never officially put on the agenda.”