On July 24, Sudbury was the scene of a rally by OPSEU members fighting proposed changes to their pension plan, a move that will “undermine” the pensions of many members, the union said.
Jul 25, 2012 5:11 PM By: Arron Pickard 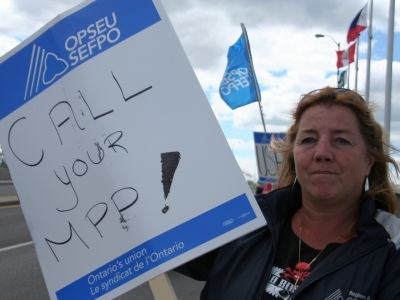 Sue Brown, regional vice-president of Region 6 for OPSEU, joined about 20 other union members July 24 at a rally on the Bridge of Nations to inform the public of changes to pension plans that will see less control of how that money is invested. Photo by Arron Pickard.
On July 24, Sudbury was the scene of a rally by OPSEU members fighting proposed changes to their pension plan, a move that will “undermine” the pensions of many members, the union said.

About 20 public service employees lined the Bridge of Nations in an effort to inform the public about the province's plans for the pension funds. It was a modest turnout, said Sue Brown, regional vice-president of Region 6 for OPSEU, but given the fact it was last-minute event, it went well enough.

OPSEU's board began its fight to keep a meaningful say in how its pension plan operates on July 20, stated a notice posted on the union's website.

“The government is now demanding greater control” over the pension plan, and that “threatens us all,” union president Warren Thomas said in the notice.

As part of the 2012 budget, Premier Dalton McGuinty and Finance Minister Dwight Duncan tabled changes to public pensions in an effort get control over costs, which are expected to double by 2017-18 if measures aren't taken now. The changes will see employees who share pension contributions with their employers contributing more, and public sector pensions where the employer contributes the majority of the funds will be moved to a 50-50 cost-sharing model.

The government also plans to introduce legislation in the fall that would pool smaller public-sector pension plans into larger ones. Many smaller public sector defined benefit plans have a relatively small amount of assets and members — about 50 plans have assets of less than $1 billion — and each has its own investment management, according to the Ministry of Finance. Not only does this duplicate costs and prevent economies of scale, it also means the plans can’t access higher-return investment opportunities available to larger investment pools.

The province appointed Bill Morneau to lead public consultations and develop the framework. He will provide final recommendations by early fall.

In 1996, OPSEU negotiated control over half of its members' pension contributions so the union could invest the money in areas that met members' morals and values, Brown said.

“The whole idea was, that we knew where the money was being invested, and we knew who was investing it, and we felt good about it,” Brown said.

Sudbury's rally is part of a much larger campaign to counter what OPSEU is calling the province's move to weaken important pension plans, including the OPSEU Pension Trust for employees of Ontario Public Service and the LCBO, the CAAT Plans for academic and support college staff, the Ontario Municipal Employees Retirement System (OMERS) for municipal government employees and the Healthcare of Ontario Pension Plan (HOOPP) for hospital workers.

Now, the province is trying to wrest control away from the union over that portion of the pension, Brown said, and throw it into a large pool with all other pensions and do with it as they see fit.

“To me, it sounds like they want to play with our money and give it to their rich friends, and that's wrong,” Brown said, as passing vehicles honked in recognition of the message union members were hoping to get across to the public. “It's theft, because half of that is my money that I've invested over my 30 years of service. I'm totally against this, and I'm afraid of where that money might go. We're going to fight this.”

OPSEU members might also be taking legal action, she said.

“As a pensioner, I'm willing to sue,” she said. “You can't just take away my money like that and invest it in things I am not comfortable with. I don't know where everything stands with that, and we just want people to know this is happening.”

Similar rallies are slated for July 27 when OPSEU members will set up in Ottawa in front of McGuinty's Ottawa-South riding constituency office, as well as many other locations across Ontario, she said.

Putting pensions at risk isn't the answer to solving the province's debt, Fahey added. Eliminating corporate tax cuts, on the other hand, “would put an end to the debt pretty quickly.”

Businesses and towns need to pay attention to this, Brown said, because what members back through their pension will essentially dictate on what they spend their money.

“Everyone hopes for a good pension, it's what we all strive for,” she said. “If our money isn't invested properly, and it doesn't do well, we're all in trouble, which means so are the towns and cities we live in right across the province.”

Both women are encouraging residents to call their MPPs and tell them they are not in favour of selling off pensions.

Nickel Belt MPP France Gélinas said the province's auditor general has reviewed such pensions as OMERS and HOOPP, and has determined the current system is "way cheaper for the future pensioners than any of the other public-private partnerships the government wants to put in place."

"The workers are 100 per cent right to fight to protect what they have; this is the best way to guarantee a secure income once they retire," Gélinas said. "This is not a done deal, it's only opened the door to this, and it's a long way from actually happening."

The issue is not something that will gain the support of the NDP if the Liberals come knocking at their door, Gélinas said. The PCs haven't collaborated with the Liberals on any piece of legilsation so far, and "the way I see it is that it's going to be a tough sell. The more people who lend their support to this rally, the greater the voice will be and the greater the chance is of being heard."

"If you do nothing, then the government takes no action and thinks residents agree with what they are doing. One way or another, you have to get to your government to let them know you agree with this or disagree with that. Rallies (like the one stage by OPSEU) is one of the ways people in Ontario talk to their government and let them know the position they have taken goes against the people they represent."