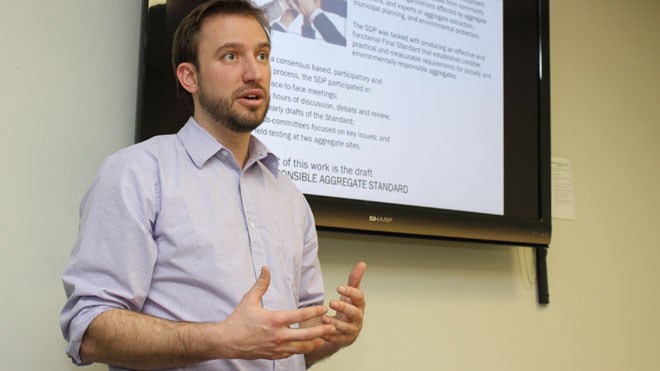 A new organization hopes to create a voluntary certification standard for Ontario's often contentious aggregates industry by the summer.

The Cornerstone Standards Council held its first public session in Sudbury Thursday to receive feedback from the industry, environmental organizations and community members.

In southern Ontario, battles over aggregate sites, the environmental concerns they raise, and impact on communities – ranging from an increase in traffic from large trucks and noise – have gone to the Ontario Municipal Board, where a lot of time and money is exhausted before the issues are resolved.

Nicholas Schulz, the Cornerstone Standards Council's director of outreach, said voluntary certification for the industry could help reduce conflict between operators and communities.

Municipalities could, in theory, only approve sites that meet the Cornerstone Standards Council's certification standards.

“There's a competitive advantage,” Schulz said. “They (municipalities and private purchasers) said early on they would prefer operators that are certified.”

To be certified, companies would have to pay for an audit – which can be quite expensive – that would ensure they comply with a list of principles that range from proper community consultation regarding a new site to respect for Aboriginal peoples' rights and cultures.

Certification, which would be issued on a site-by-site basis, would last for 10 years. Each site would be audited a second time, about five years after the initial approval to ensure compliance with the standards.

The Cornerstone Standards Council's 106-page draft standards include seven principles – each with a number of core requirements.

A company would have to meet all the core requirements to be certified, but could be given leeway if small changes are necessary, with the caveat that it be compliant after a second audit.

The Cornerstone Standards Council started a 60-day consultation on Monday, Jan. 6 in order to amend its draft standards with community and industry feedback.

The draft was created with the input from aggregate industry representatives and environmental organizations.

“There were participants from industry on the panel that developed this draft, but that shouldn't imply the endorsement of all producers,” said Dan Muys, a spokesperson for the Ontario Stone, Sand & Gravel Association. “It's something people will have to sit down with and digest.”

Muys said Ontario's aggregates industry is regulated by 25 provincial and federal statutes, along with municipal bylaws and official plans.

Most notably, Ontario's Aggregate Resources Act specifically regulates the industry. The Standing Committee on General Government recently completed a review of the act and submitted its report to the Legislature on Oct. 30, 2013.

The Ministry of Natural Resources, in collaboration with other ministries, is currently reviewing the committee’s recommendations and exploring options to potentially amend the act.

Muys said that while it is too early to comment on the Cornerstone Standards Council's standards before they are finalized, voluntary certification has proven to be successful in other industries.

During his public consultation in Sudbury, Schulz brought up the Sustainable Forestry Initiative as an example of a successful voluntary certification body.

“We think it’s a positive step forward when industry and the environmental community work together toward a common goal,” said Jolanta Kowalski, a spokesperson for the Ministry of Natural Resources, in an email to Northern Life.

For the Sustainabile Forestry Initiative, the certificate is valid for three years with annual audits.

The organization will begin a second consultation in April or May, and expects to have its final standards ready by June 2014.