The union was also on strike in the Peel and Durham regions until yesterday's ruling declared them illegal.
May 27, 2015 2:51 PM By: Heidi Ulrichsen 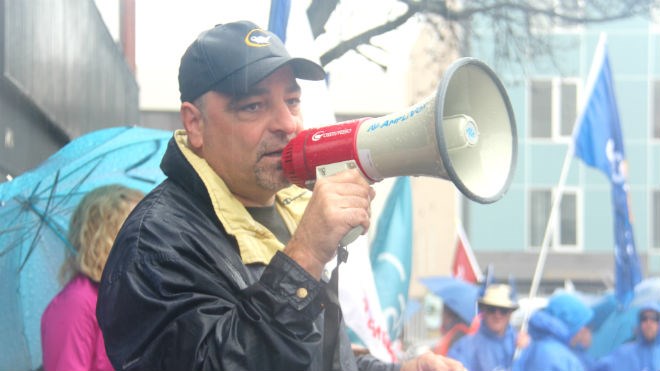 A strike by Rainbow District School Board high school teachers is now in its second week. James Clyke, president of Ontario Secondary School Teachers' Federation District 3, addresses members during a march and rally in downtown Sudbury on May 4. Photo by Heidi Ulrichsen.
The union was also on strike in the Peel and Durham regions until yesterday's ruling declared them illegal.

In a 53-page ruling, the OLRB said the strikes focused on issues such as class sizes that are actually supposed to be dealt with at a provincial level.

“I'm just a bit disturbed that the OLRB would decide that it's an illegal strike based on what's written on a sign,” said OSSTF District 3 president James Clyke, who represents Rainbow board high school teachers.

“Like I said often in the media, every proposal we put forward was the jurisdiction of the Rainbow District School Board, not central issues.”

The sudden return to the classrooms is difficult, as it didn't give teachers enough time to prepare, he said.

“I asked the Rainbow District School Board to give the teachers at least a day before the students came back in order for them to prepare, but that was denied,” he said.

The OLRB did not forbid the three local strikes permanently, but issued a two-week moratorium until the OSSTF goes back to the bargaining table or takes steps to make sure it's not striking about central table issues.

However, this step may be unnecessary, as the province has introduced back-to-work legislation banning strikes in Rainbow, Peel and Durham until the end of the school year. The legislation is expected to pass this week.

When asked if his union local is planning on getting back to the bargaining table with Rainbow in the near future, Clyke said no decision has been made.

“At some point, we definitely will have to,” he said. “In order to get a negotiated agreement, you have to do that. Right now we're just deciding what to do on a go-forward basis.”