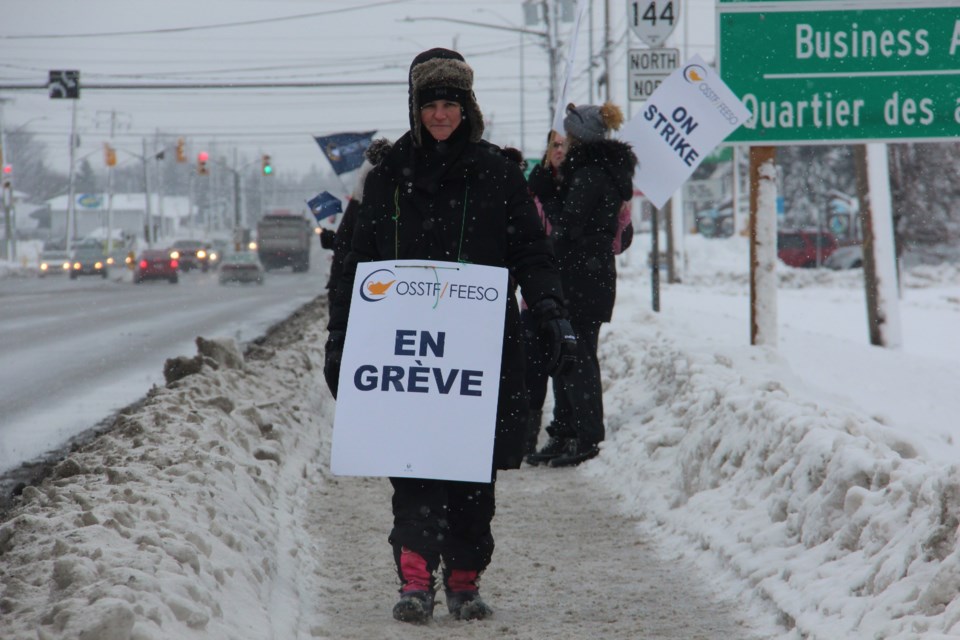 OSSTF members strike in Greater Sudbury back in December. (File)

The teachers voted 96.9 per cent in favour of the deal. This comes on the heels of the central deal which was ratified in mid-May.

“We are pleased to have come to an agreement that was ultimately supported by the membership today through this very important vote”, said Teacher Bargaining Unit President Eric Laberge, in a press release.

“I would like to thank all the teacher members who have been behind us since this process began last November. We can now turn the page and move forward, focusing on meeting the needs of our students.”

Rainbow District School Board and the union representing more than 600 permanent elementary teachers in Sudbury, Espanola and Manitoulin Island have reached a tentative agreement at the local level.

Details of the agreement will be released once ratified by members of the Elementary Teachers’ Federation of Ontario (Rainbow Local) and approved by Rainbow District School Board Trustees.

The new deal, if ratified and approved, will be in effect from Sept. 1, 2019 to August 31, 2022, aligning with the provincial settlement at the central bargaining table.

“We are pleased to reach a tentative agreement with the ETFO Rainbow Local,” said Rainbow District School Board chair Doreen Dewar, in a press release.

“Our elementary teachers responded to distance learning with creativity, care and compassion. We commend the bargaining teams from the Federation and the Board for their collective efforts. This is much welcome news in the last week of school.”

its teachers to carry out their mandate in offering French-language education to all its students,” said the board’s chair, Jean-Marc Aubin, in a press release.

“In working hand in hand with our teachers, we are able to offer superior quality education and contribute to the success of CSPGNO students.”

“Many people played a key role in establishing an equitable and favorable contract for both parties and I wish to thank them for their work and commitment,” said Marc Gauthier, director of education for CSPGNO.

The ratification meeting will be held Sept. 29 of this year.

AEFO and Conseil scolaire catholique Nouvelon reached a three-year tentative agreement June 23. The deal is retroactive to Sept. 1, 2019. The ratification meeting is to take place on September 22, 2020.

“This agreement reflects the desire of both parties to work together and to offer students the best quality French-language education,” said André Bidal, Chair of CSC Nouvelon.

“With this agreement, we will be able to join forces to support the development and success of each student while providing families with quality French-language Catholic education from Kindergarten to Grade 12.”

“Many people invested a great deal of effort during the negotiation of this agreement and we truly appreciate their contribution,” said Paul Henry, Director of Education at the CSC Nouvelon.

“Their efforts will make it possible for us to offer a stimulating work environment to all members of our school community.”

Ford, solicitor general to make COVID-19 announcement
Jul 7, 2020 12:00 PM
Comments
We welcome your feedback and encourage you to share your thoughts. We ask that you be respectful of others and their points of view, refrain from personal attacks and stay on topic. To learn about our commenting policies and how we moderate, please read our Community Guidelines.