The board has since apologized to the family, and sent home a letter to parents at the school
Feb 23, 2021 9:00 AM By: Heidi Ulrichsen 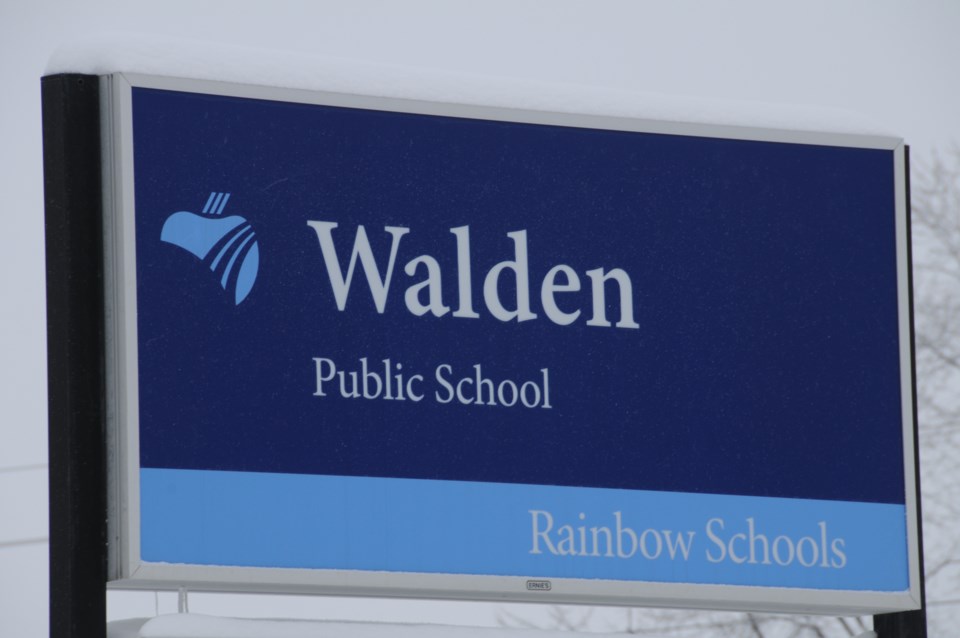 The parent of a four-year-old Walden Public School junior kindergarten student is speaking out after the child left the school unnoticed by staff and walked by himself several blocks to his mother’s workplace last week.

“When I talked to him, he said he made sure to tell me he looked both ways twice for traffic,” said the boy’s father, Kurt Fraser.

“He let the cars go by. He let the big truck go by before he crossed the road. He was very good for that. He knew that he was going to mom’s work. He knew where it was and how to get there

On Friday, two days after the incident occurred — and after Fraser raised concerns with both the school and with the school board — the Rainbow District School Board issued a statement. A letter was also sent home to parents.

The board calls the occurrence a “most unfortunate incident that should never have occurred.”

It also said Rainbow has apologized to the family and has taken steps to ensure that this does not happen again, including reviewing the incident with school staff to ensure appropriate protocols are followed at all times.

For privacy reasons, the board said it is not able to speak about personal information related to students or staff.

“Please know that we have taken this matter very seriously and acted accordingly,” the statement said.

The letter sent home to Walden P.S. parents put the incident down to “miscommunication and a clear breach of protocols.”

“We regret this incident and want to assure our students and families that we have taken this matter seriously,” the letter adds.

“We will do everything that we can so our students are not given any opportunity to wander away from school. At home, we invite parents to talk to their children about the importance of staying at school while waiting to be picked up by a parent.”

Fraser said the incident started Wednesday morning, when his son complained to his teacher of having a sore stomach.

He was sent to the office (by himself, as far as Fraser has determined), where he was given some juice and a little bit of a rest, and then sent back to class.

Given he was showing symptoms of COVID-19, this is a breach of board protocol.

A Rainbow board document published in September says the following: Students who become ill while attending school will be isolated in a separate room with staff supervision, at least two metres away from other students. Families will be contacted to pick up their child or teen immediately.

“Had they have done that, he would not have been able to leave the school alone, because this would have prevented it,” Fraser said. “He would have been isolated in the office until the parent came to pick him up.”

Once the boy was back in the class, the teacher could tell he was just “very off” and not himself. The teacher directly contacted the student’s mother and arranged for her to pick him up.

Fraser said he understands that the board’s protocol is actually that the school office is supposed to arrange for ill students to be picked up, not teachers.

The teacher told the child to get dressed in his winter clothes in the hall. He apparently did so, but came back into the classroom, and was still wearing his running shoes instead of winter boots. He was then told to go put his boots on, which he did.

The parent said he also understands it is also against school policy for students to be unsupervised by staff members within the school.

The boy stood in the classroom doorway for a second, and then walked past the office, left through the “daycare entrance to the school,” and then proceeded to walk down Sixth Avenue in Lively to his mother’s workplace at the intersection of Main Street and Sixth Avenue.

All told, Fraser said the boy was unsupervised for at least half an hour between when he left the classroom and when he showed up at his mother’s workplace.

Meanwhile, the mother had gone to pick up the boy at school, and got a call from her workplace saying the child was there.

“She called the school and said ‘(My child) is at my work,’” said Fraser. “They said ‘No, he’s sitting in class.’ Nobody knew where he was, or that he was gone.”

Speaking to Sudbury.com Friday, Fraser said he was hoping the board would do a full investigation of the incident, as well as communicate with parents about what had happened.

Hours after we spoke to Fraser on the phone, the board issued the aforementioned statement and letter to parents.

Fraser said he wasn’t impressed with how the school and the Rainbow board responded to the incident.

“It seems like until I made a bit of noise about it, they weren’t going to do anything,” said Fraser, who took to social media last week to inform other parents about the incident.

“It was just kind of ‘oopsie, sorry about that!’ Yeah, we made a boo-boo.' I don’t think it was even reported to the superintendent until I got involved and started raising a bit of fuss.”

He said when he talked to the principal, he was told that an investigation had already been conducted. But Fraser said he was hoping for something more comprehensive.

“You don’t do that in 20 minutes,” he said. “Incident investigations take a big amount of time, and there’s teams of people that have to do that. There’s a number of procedures and protocols here that weren’t followed.”

When Fraser heard from the superintendent, he said he was leaving it in the hands of the school’s principal and faculty to review their procedures. He said the official didn’t even seem to be aware that his son was sick at the time of the incident.

“He wasn’t too interested in anything,” he said. “He was just leaving it to the staff and principal to deal with.”

Faculty calling out Ross Romano for ‘inaction’ on Laurentian’s financial crisis
Feb 28, 2021 9:00 AM