French speakers make up more than a third of the population, says Northern Policy Institute
Nov 11, 2019 2:00 PM By: Sudbury.com Staff 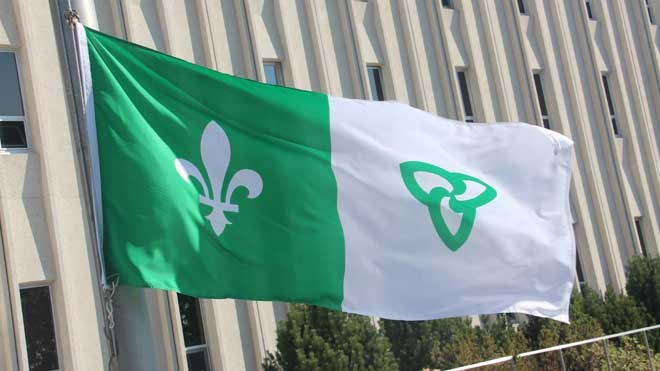 The Franco-Ontario flag, designed and conceived in Sudbury, celebrates the Francophone population of Ontario. (File)

In order to maintain Greater Sudbury’s current proportion of core working-age French speakers at 38.7 per cent in the year 2026, between 32.5 and 35.6 per cent of future in-migrants would need to be French-speaking.

That's one of the key findings in an analysis by the Northern Policy Institute (NPI) in partnership with Réseau du Nord in estimating how many future French-speaking migrants should be targeted for Greater Sudbury, in order to maintain the current proportion of French-speakers in the city.

It is known that Northern Ontario will be experiencing an increase in the number of seniors in the coming years, at a higher proportion than provincial levels, said the NPI in a press release. This will mean future labour market shortages, and a greater need for youth retention and migration to the North.

“In Greater Sudbury, French speakers make up more than one third of the population,” said  Thomas Mercier, director of Réseau du Nord. “Therefore, the composition of future migrants should be just as important as retention in order to prevent a faster decline of specific subgroups of the population that are following the overall aging population trend.”

The authors focused on future projections of the French-speaking, core working-age population, those between 25 and 64 years of age. They used a methodology to calculate an estimated range of in-migrants required by 2026 in order to maintain the current proportion of French speakers in Greater Sudbury.

“As Northern Ontario’s Francophone Immigration Support Network, we need to have this kind of data available to us to ensure proper strategic planning to increase the number of French-speaking immigrants,” said Mercier “The research shows that we need to act now.”

This research is another result of the Northern Analyst Cooperative program, which allows members to “time share” a professional policy analyst. By merging our collective resources, we can ensure that the smallest municipality or local charity can access high-end skills at an affordable price.