Patient surge 'shows no signs of letting up,' says HSN

Due to a patient surge since early March Health Sciences North has been over capacity with “no sign of letting up within the short term,” according to the hospital's vice-president of clinical programs.
Mar 11, 2016 9:25 PM By: Jonathan Migneault 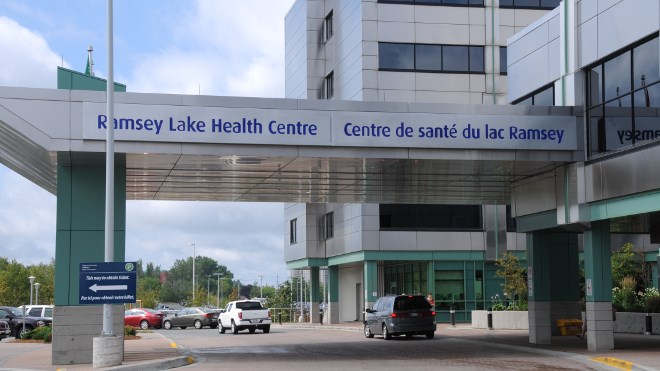 The 14 people who sit on Health Sciences North's CEO Patient and Family Advisory Council have made a number of changes to make things better for patients and families at the hospital. File photo.
Due to a patient surge since early March Health Sciences North has been over capacity with “no sign of letting up within the short term,” according to the hospital's vice-president of clinical programs.

CUPE Local 1623, which represents service and clerical staff at the hospital, recently raised concerns about overcrowding at Health Sciences North.

“There aren't enough resources to provide proper staffing levels so we can deal with the overcrowding,” said CUPE 1623 president Dave Shelefontiuk. “I've been there 30 years and I've never seen the atmosphere and stress level with staff like it is now.”

Shelefontiuk said the fire marshal was called to the hospital earlier this week because patients were forced to wait in a hallway, creating a fire hazard.

Shelefontiuk said he blames an provincial hospital funding freeze for staff shortages and overcrowding at the hospital.

“I'm not blaming the hospital, it's the funding issue,” he said.

Costs at Ontario hospitals are increasing by over four per cent annually, rising faster than inflation because of the soaring costs of drugs provided free to inpatients and medical technologies, said CUPE.

Taking those rising costs into account, the union has said Health Sciences North's budget has been cut by more than 20 per cent in real terms over the last four years of frozen budgets.

The hospital faced a similar patient surge in early December but it was not as sustained as this one, said David McNeill, Health Sciences North's vice-president of clinical programs and chief nursing officer.

“We're at a time of year where there appears to be a lot of illness within our community,” he said. “Every year there seems to be just a little bit more pressure at our peak periods.”

McNeil said that burden of illness in the community tends to decrease as the weather improves in the spring.

When asked if the hospital had sufficient funding to meet its obligations to the community McNeil said the question was difficult to address.

“We could always use more money to provide patient care. I can't argue that point,” he said. “If you ask anybody in any organization, there's probably never enough money to do what you want to do. There's only so much money to go around so we have to optimize that. Hospitals are very expensive places to build a health system around.”

Part of optimizing the funds the hospital does receive means adapting to the changing models of health-care delivery in Ontario.

McNeil said Health Sciences North is working closely with community partners to discharge patients more rapidly, when appropriate, so they can receive care at home or in a community setting.

“I urge you to address the overcrowding at our local hospital,” she wrote to the minister.

For its part, the province has said it has made a number of investments to alleviate hospital pressures.

In an email to NorthernLife.ca Ministry of Health and Long-Term Care spokesperson David Jensen said the province has increased Health Sciences North's funding by $100 million since 2003. The hospital now receives $279 million per year, he said.

The province also invested $94.5 million in the Pay for Results program in 2015-2016 to better manage patient flow in emergency rooms at hospitals across Ontario, he added.

A $1 million investment in a harm reduction home managed by the Canadian Mental Health Association Sudbury/Manitoulin, and $520,000 for transitional community support should also help address overcrowding at the hospital, he said.