Peroni, a longtime trustee with the Sudbury Catholic District School Board, says many job cuts would be in the bureaucracy, at the Ministry of Education, for example.
Jun 5, 2014 8:24 PM By: Heidi Ulrichsen 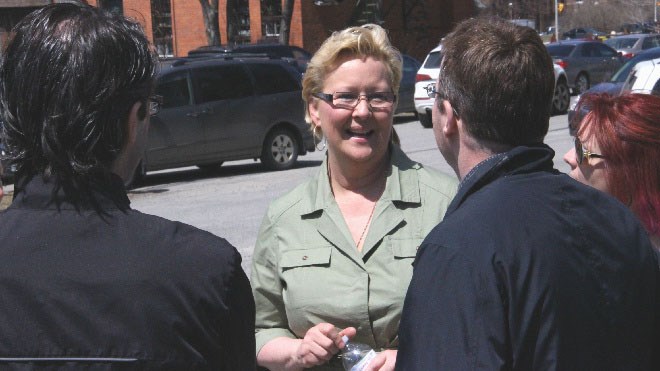 Sudbury Progressive Conservative candidate Paula Peroni this week at the official opening of her campaign headquarters at the corner of Brandy and Paris streets. Darren MacDonald photo.

Peroni, a longtime trustee with the Sudbury Catholic District School Board, says many job cuts would be in the bureaucracy, at the Ministry of Education, for example.

She said she has no problem with that if it means more money for special needs students, one of the areas of in education where the Tories say they'll boost funding.

Teachers unions, though, warn many of the cuts would involve educational assistants that work with special-needs students.

Peroni said current class size caps are ridiculous. “If you need to have 26 or 27 children in one grade, and yet the hard cap is 25, you have to split that class,” she said. “What about any of that is rational?”

She said she supports the idea of full-day kindergarten, a program that will reach full implementation this September, but said the province should have waited until it could afford it.

Sudbury Liberal candidate Andrew Olivier said the proposed cuts would have a “drastic impact on education.”

“For myself, my own experience, I had an EA (educational assistant) in high school,” said Olivier, who became a paraplegic in high school after a hockey accident.

Among the Liberal education promises are completing the rollout of full-day kindergarten this fall, bringing in 60 minutes of physical activity in a school day, and continuing the 30 per cent off tuition grant.

Despite a local media report that quoted Olivier as saying he supports the amalgamation of public and Catholic school boards, he said he doesn't, in fact, advocate for this.

He said what he meant was the current education system should be reviewed to make sure it's as efficient as possible.

With math scores on standardized testing slipping in recent years, the Liberals are promising to review the math curriculum, which has been criticized of late because of its lack of focus on the basics.

The Liberals hope to “achieve a balance” that makes sure students understand basic concepts while developing problem-solving skills.

Boosting math achievement is also one of the PCs goals, who advocate going “back to basics.”

“Clearly it's lacking,” Peroni said. “It's not taught the way it was taught when I went to school ... Students are struggling, and we clearly need to make changes and start listening to our teachers.”

He said the only real way to boost student achievement is to increase supports to students — for example, by hiring 1,000 more educational assistants, one of the enhancements proposed by the NDP.

“If they're so entrenched with their belief that EQAO scores are the end all of education, those will go up with that type of support,” Cimino said.

The NDP is also touting its “Open Schools” plan, which would allow school boards to apply for funding to keep schools threatened with closure open.

Bringing up the example of several South End schools that have closed in recent years, Cimino said school boards are often forced to close schools because they don't have the money to do repairs.

Often these schools are crucial hubs for community groups, he said. The fund would allow school boards to apply for money to do repairs, Cimino said.

Unsurprisingly, the candidate opposes the cuts planned by the PCs.

He said it's a “real disappointment” the party is “attacking” education workers' salaries and benefits, something that caused labour unrest among teachers when the Liberals tried it in 2012.