Photo controversy brings Soldiers of Odin into the limelight 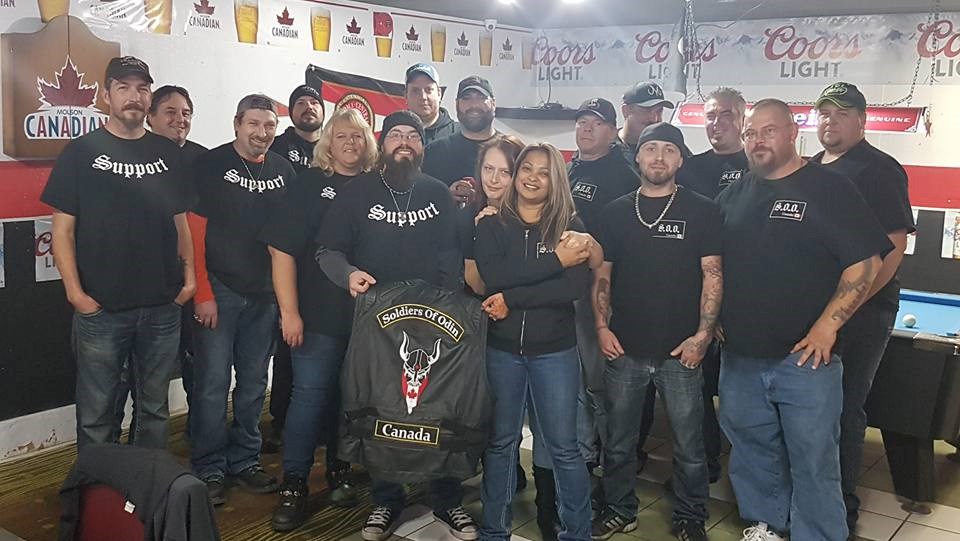 The group, the Soldiers of Odin, started out as a far-right extremist group in Finland two years ago, but since splitting with the main group in May, chapters in Canada have been trying to prove they're different. (From Facebook)

The group, the Soldiers of Odin, started out as a far-right extremist group in Finland two years ago, but since splitting with the main group in May, chapters in Canada have been trying to show they're different.

"We're just trying to prove that we're not racist," he said. "I find what's hurting us is the fact the police chief made that statement apologizing and that he shouldn't have taken the picture."

To make matters worse, MacKinnon said the soup kitchen has been getting calls telling them to cut ties with SOO or lose donations.

"That's probably been the worst part of it all because the soup kitchen is getting calls,” he said. “Which I think is kind of sad because why would you stop feeding people because of who's feeding the people?"

By his own estimation, the Sudbury SOO chapter has picked up about 10,000 dirty needles on its patrols, and volunteered for causes like the soup kitchen and organ donation.

But a perusal of SOO websites and Facebook pages yields a number of intolerant posts, including the Calgary chapter, which outright calls Islam “evil.”

So why stick with the name?

"I can't speak for every member,” MacKinnon said. “But we've been in Canada for two years now. Before this all blew up, we were here, not long after Soldiers of Odin started. The name was already here. You just didn't hear much about us.

When he and others on this side of the ocean found out about the extremist activists in Finland, they cut ties. Now they're called traitors by some of the extreme elements, MacKinnon said, and they want them to drop the name.

"So some of us want to keep the name for spite, because Finland is mad at us, they don't want us using it," he said. "Finland calls Canada traitors, except for Quebec, of course. Myself, I like to spite them, because we're Canada, we're not Finland."

And there's little point in changing the name, MacKinnon said. They tried that in Sault Ste. Marie.

"When they talk about them now, they call them the former Soldiers of Odin," he said. "All we do is help out at the soup kitchen, collect needles, recently we started helping out with organ donors. We're not going anywhere. We're going to keep doing what we can."

While some groups are clearly anti-immigration, MacKinnon said his group is supportive, and that includes the refugees from Syria that have arrived in Sudbury.

"I don't mind that at all, we don't mind at all," he said. "As far as immigrants coming here, we're all for it. We have no issue with it at all.

He admits he was criticized for a post on social media expressing concern that the vetting time for immigrants was being reduced.

"My comment was they shouldn't speed things up, they should leave it as it was,” MacKinnon said. “We have no problem with them coming here, we just think that when you start rushing people through, you miss things sometimes and you can let a bad apple in."

While the group's photos normally only have white Europeans in them, MacKinnon said they have First Nations as members in Sudbury, and a man from India has expressed interest in joining.

He understands people are concerned about what his group is really about, and that hateful voices are all over the Internet.

"I know there's a lot going on,” he said. “There's a lot of bad out there and a lot of good. I try to focus on what we're doing around here, especially in Ontario. We're trying to clean up our image around here."

That effort took a body blow with the controversy surrounding the photo with the police chief. While he was initially sympathetic to the chief's apology, MacKinnon now says it has done a lot of damage.

"We were at New Sudbury Days (Sunday) and a lot of people came up and said hi, some kept going,” he said. “The police chief wouldn't even walk near us. He turned and walked in the other direction when he saw it was us standing there."

It was Pedersen who approached them the first time, MacKinnon said, just before the photo was taken.

"While I was gone, the police chief walked up to our members of the club and said he knows who we are, he said he knew we were out there cleaning up needles and he thanked us," he said."Then he was going to take a picture with us, but they said David's not here, he's our president and he'll be back shortly.

"The police chief came back about 45 minutes later, came up, introduced himself as Paul, shook my hand and said, 'let's do this picture."