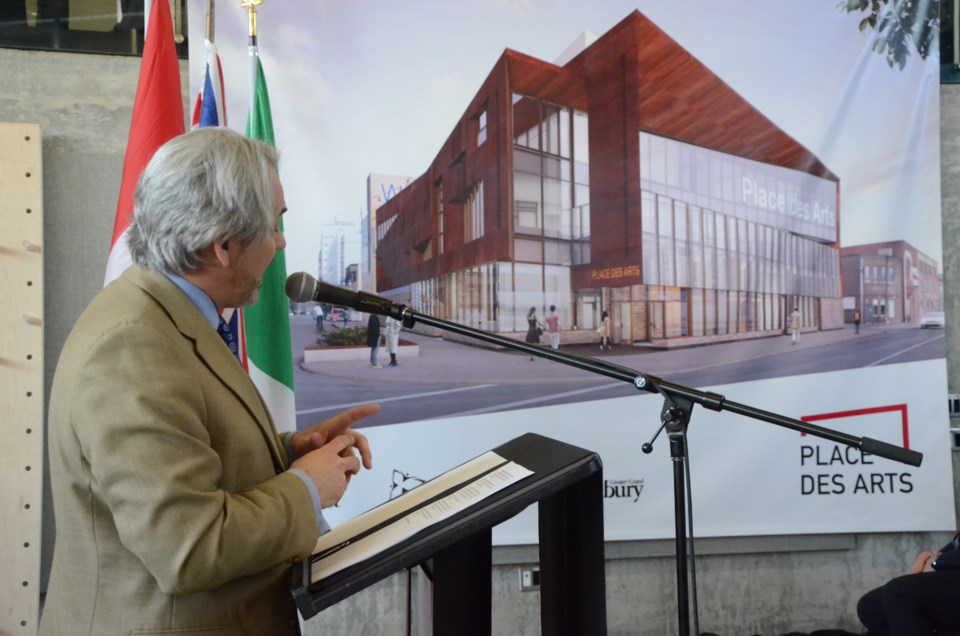 Place des Arts, which is under construction in downtown Sudbury, recently received a $20,000 joint contribution from the Fondation pour la langue française and Unis TV.

The organizations presented their donation on Sept. 25, which, appropriately, was Franco-Ontarian Day.

“We were immediately attracted to the Place des Arts project because it is consistent in every respect with our objective of contributing to the development of Francophone communities in Canada,” said Martin Gélinas, executive director of the Fondation pour la langue française, in a press release.

“We wanted to support the creation of this strong, promising, unifying cultural institution, which will enrich the Francophone minority community.”

The donation goes toward the construction of Northern Ontario’s first multidisciplinary arts and culture centre.

A portion of the donation will also be used for an artistic initiative to enliven and enhance the site perimeter later in the ongoing construction phase.

Substantial completion is expected by the end of 2020, and the economic benefits of construction are estimated to be $18.7 million.

Place des Arts would like to thank its national partners for their joint contribution to the project and the development of the region’s Francophone and Francophile community, said the press release.

With this contribution, the total value of announced major donations to the Share Our Sense of Place fundraising campaign is now nearly $1.3 million, with more capital donation announcements to come.

Place des Arts is also supported by funding providers such as Canadian Heritage, FedNor, the Northern Ontario Heritage Fund Corporation, the Ministry of Tourism, Culture and Sport, the City of Greater Sudbury and the Ontario Arts Council.