She says it's a 'disappointment,' as it was an opportunity to promote arts and culture
Dec 6, 2018 5:00 PM By: Heidi Ulrichsen 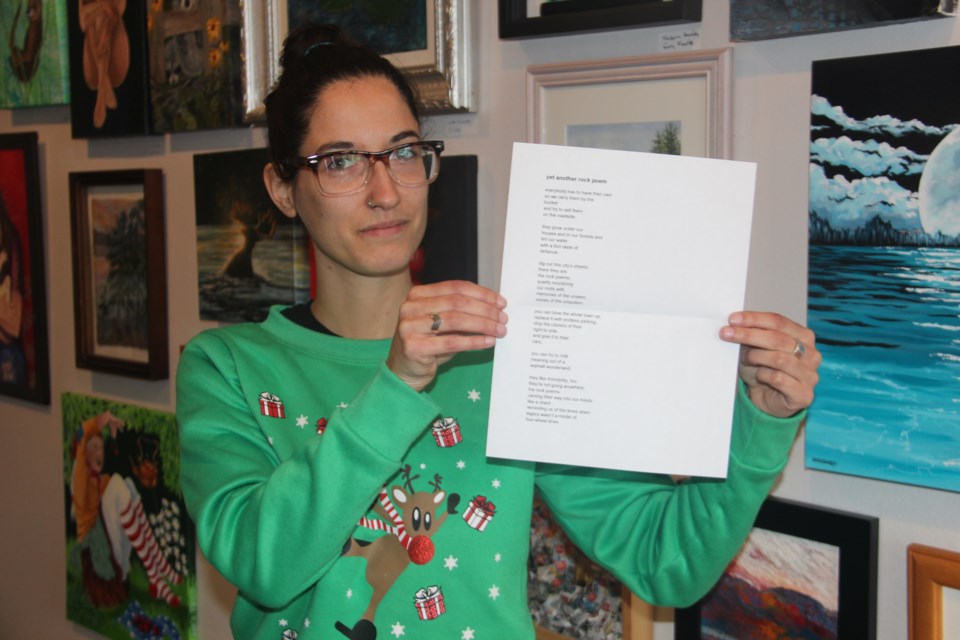 Greater Sudbury poet laureate Chloé LaDuchesse shows off a print-out of her poem,  “Yet Another Rock Poem.” (Heidi Ulrichsen/Sudbury.com)

In September, Greater Sudbury poet laureate Chloé LaDuchesse was asked by the city to read a poem at the Dec. 4 inauguration of the new city council.

Because she felt none of her existing work was appropriate, and because she wanted a challenge, she wrote a new poem for the occasion.

After putting about a full day's work into the piece, which is entitled “Yet Another Rock Poem,” and is written in English, her second language, LaDuchesse submitted it to the city for review.

“I sent them as soon as it was ready, and a couple of days later, they told me my presence wasn't required anymore,” LaDuchesse said. “The plans had changed.”

The poem touches on what LaDuchesse called in a Facebook post “the same old debate” surrounding parking and the city's big projects.

She said ever since she moved to Greater Sudbury three years ago, whenever someone talks about a project such as Place des Arts, everyone always wants to talk about what that's going to mean for parking.

One of the lines in the poem is as follows: “You can blow the whole town up, replace it with endless parking, strip the citizens of their right to vote, and give it to their cars.” (Check out the full poem below).

“The poem is about what is means to be a Sudburian,” said LaDuchesse, who's originally from Montreal.

“It's about how as a society, not just in Sudbury, but in general, we get our identity and the meaning of our lives not through infrastructure and parking and roads, but through arts and culture.”

She said she doesn't know for sure if it was the political nature of her poem that resulted in her being removed from the inauguration's agenda.

“Of course it's a busy meeting,” LaDuchesse said. “Maybe they didn't have enough time. I asked them if they didn't like the poem, and they just said plans had changed. So you never know.”

The City of Greater Sudbury provided the following written response when asked about LaDuchesse being removed from the inauguration's agenda.

“Since being appointed to the position of poet laureate in February of this year, Ms. LaDuchesse has represented the city at various events, sharing city council's commitment to arts and culture.

“We look forward to her continuing this important work in our community and hope to have her in attendance at other city events in the future.”

LaDuchesse has received some social media support from Kim Fahner, who immediately preceded her as the city's poet laureate.

“A brilliant poem, & some truths that maybe not everyone wants to hear, but should,” Fahner said on her Twitter page. “Culture is crucial, & speaking up about threats to cultivation of culture, is brave. Bravo!”

LaDuchesse, who is one year into her two-year term as poet laureate, said the situation is a missed opportunity to bring more visibility to arts and culture in the city.

“I'm a bit sad not to have been able to share my poem with people in the room, but also it's streamed on the Internet,” she said.

“I wrote it for the citizens, not only for the politicians there. To have this opportunity taken away from me was not my favourite moment. It was a disappointment.”

"yet another rock poem"

everybody has to have their own
so we carry them by the
bucket
and try to sell them
on the roadside.

they grow under our
houses and in our forests and
tint our water
with a thin taste of
defiance.

dig out this city's streets:
there they are.
the rock poems.
quietly nourishing
our roots with
memories of the unseen,
voices of the unspoken.

you can blow the whole town up,
replace it with endless parking,
strip the citizens of their
right to vote
and give it to their
cars.

you can try to milk
meaning out of a
asphalt wonderland.

they like immobility, too.
they're not going anywhere.
the rock poems.
carving their way into our minds
like a chant
reminding us of the times when
legacy wasn't a model of
four-wheel drive.