Worldwide Rally for Freedom being held in Bell Park this Saturday
May 13, 2021 5:00 PM By: Matt Durnan 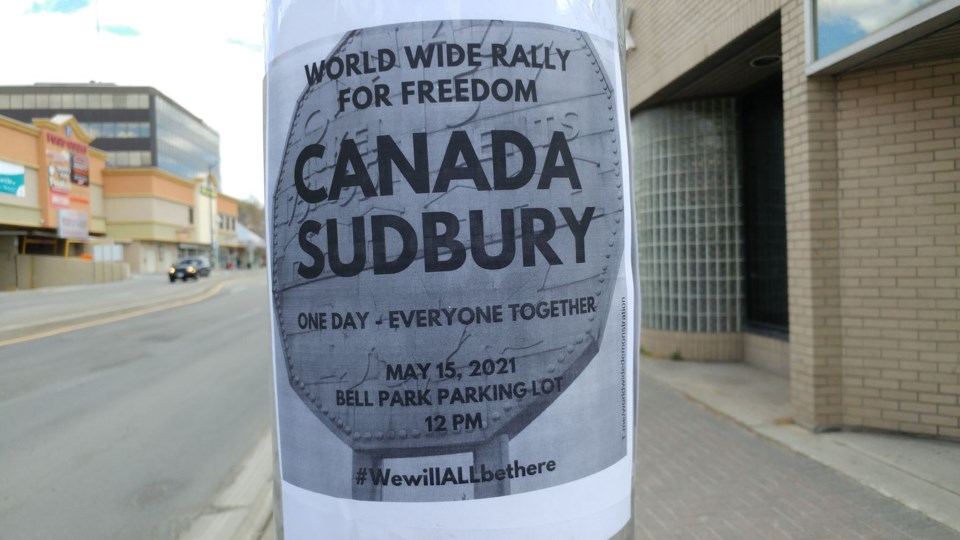 Some Sudburians plan to join in on a number of other Canadian cities in the "Worldwide Rally for Freedom", scheduled for Saturday, May 15.

Some Sudburians plan to join in on a number of other Canadian cities in the "Worldwide Rally for Freedom", scheduled for Saturday, May 15.

The Sudbury rally will take place in Bell Park at noon on May 15, as the Nickel City will join with dozens of cities across Canada and more than 100 cities around the globe rallying against pandemic restrictions.

The Facebook page for the event has garnered a following of more than 32,000 people and its message is simple, yet vague: "We will stand side by side with people from all over the world for our freedom! One day - all together!"

Greater Sudbury has seen its share of rallies, separate but similar to the one planned for Saturday.

On March 20, nearly 200 people gathered downtown at the "Rally for Freedom" in protest against COVID-19 restrictions. In the wake of the rally, the organizers were ticketed by Greater Sudbury Police.

“Under the Reopening Ontario Act, officers can issue a Part I Provincial Offence Notice with a set fine or a Part III summons with no set fine and a court date to an individual found to be in contravention of the Act,” GSPS spokesperson Kaitlynn Dunn told Sudbury.com in an email, after the March 20 rally.

“Depending on the circumstances of the situation, officers may choose to forgo a set fine and issue a Part III summons that provides an individual with a court date where the case will be presented before a justice of the peace.”

If found guilty, the justice of the peace will determine the severity of the sentence imposed, which can range from a fine to jail time.

Under the Act, the set fine amounts are $750 for those who fail to comply with an order (or $1,000 for a corporation). A fine of $1,000 can be issued for anyone who prevents an enforcement officer from enforcing the orders.

Dunn confirmed that members of the GSPS liaison team will be on-hand for Saturday's rally at Bell Park.

"We respect everyone’s right to freedom of speech and peaceful assembly, and our overall goal is to ensure public safety during an event as the role of police is public order maintenance," said Dunn in an email to Sudbury.com.

"This is accomplished through our Police Liaison Team who will be present at the rally on Saturday."

Dunn went on to explain that throughout the pandemic, the police service's initial approach to any demonstration/rally has been to engage with, explain to and educate the organizers and participants in relation to the orders the are in place at the time of the event and the public health guidelines/recommendations.

"We know that large public gatherings, whether they be organized or social gatherings pose an increased risk of transmission of the virus and threaten the health and wellness of our community especially when public health guidelines are ignored," said Dunn.

"The organizers and participants of these rallies have shown a complete disregard for the current orders after being educated multiple times and as such will be subject to enforcement ranging from $750 to $10,000 as appropriate under the Emergency Management and Civil Protections Act."