“We've done some good things, there has been a framework agreement with the province for $1 billion, but you don't win a hockey game with a couple of good shifts,” Semple said.
Mar 12, 2015 12:36 AM By: Jonathan Migneault 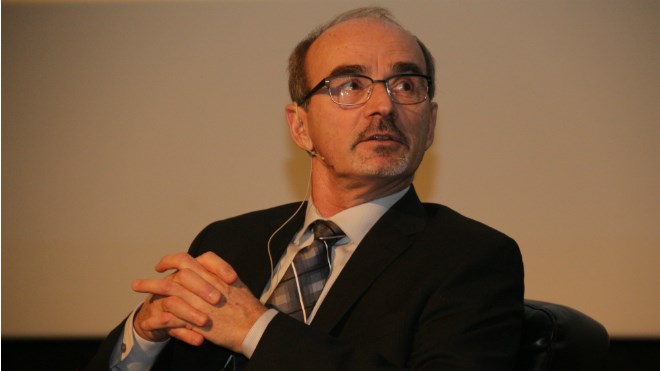 Moe Lavigne, the vice-president of junior miner KWG Resources, said in a panel discussion that disagreement among the 12 Matawa First Nations located near the Ring of Fire deposits, in the James Bay lowlands, has slowed negotiations to a crawl. Photo by Jonathan Migneault.
“We've done some good things, there has been a framework agreement with the province for $1 billion, but you don't win a hockey game with a couple of good shifts,” Semple said. “We haven't really done anything with that billion dollars, we haven't done anything with the development corporation, and the framework hasn't honestly given any benefits to the First Nations.”

George Darling, the mine technical services director with engineering firm SNC-Lavalin, who also sat on the panel, said he was disappointed by the speed at which the project has progressed.

Darling said a “huge smelter” his company is building in Madagascar – a project worth $2.5 billion – took only two years to get going.

“What I'm very nervous about is the amount of time it takes in North America to develop project, compared to countries like Madagascar that are really developing right now,” he said.

Semple said his company has been in talks with First Nations and all levels of government, regarding Ring of Fire development, since 2009.

Moe Lavigne, the vice-president of junior miner KWG Resources, which also has a presence in the Ring of Fire, said disagreement among the 12 Matawa First Nations located near the Ring of Fire deposits, in the James Bay lowlands, has slowed negotiations to a crawl.

“One of the most important things is that the First Nations we're dealing with resolve to speak to us as one,” Lavigne said. “There's no unity in their voice.”

Despite the province signing a framework agreement with the Matawa First Nations tribal group last spring, the Ontario Chamber of Commerce remarked in its report card that it’s largely unknown to the general public if any further progress has been made beyond the signing ceremony.

Laurentian University earth sciences professor David Pearson, who spoke from the audience Wednesday evening, said the chamber's expectations for development were too ambitious.

“These are not communities where it's easy to bring together to speak with one voice,” he said of the Matawa First Nations. “Their history has been a difficult history. The reasons communities are separate goes back to very personal reasons.”

Panelist Martin Bayer, a lawyer with Weaver Simmons LLP who focuses in Aboriginal law, agreed the chamber's expectations were too high, only a year after its initial report on the Ring of Fire's economic potential.

“It's probably a little unfair to expect an 'A+' in some of these areas just over the course of a year,” Bayer said.

Josh Hjartarson, the Ontario Chamber of Commerce's vice-president of policy and government relations, said he is concerned the window of opportunity to develop the Ring of Fire will disappear if there is no progress in sight.

“There is a finite timeline for this,” he said. “People will not invest if they don't get a sense of when they can turn on their investment.”

Hjartarson said even government officials have grown frustrated with the lack of momentum in the Ring of Fire.

“Officials will tell you privately that progress has been slow, and that the grades are fair,” he said. “But publicly they will not say that.”