Probing the mysteries of the universe

Deep in the Earth beneath Lively, some of the world’s leading scientists are probing the very nature of matter itself.
May 18, 2012 3:58 PM By: Heidi Ulrichsen 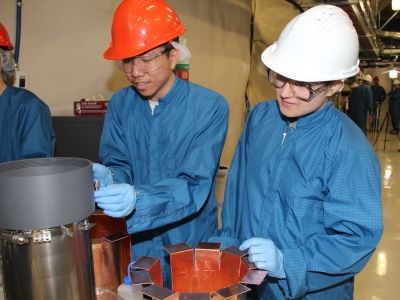 Ian Lam and Corina Nantais assemble equipment for the DEAP 3,600 project, which is searching for dark matter, at SNOLAB May 17. Photo by Heidi Ulrichsen.

Deep in the Earth beneath Lively, some of the world’s leading scientists are probing the very nature of matter itself.

SNOLAB, the deepest underground lab on the planet where pioneering work in particle physics is being conducted, officially opened on May 17.

SNOLAB is an expansion of facilities built during the Sudbury Neutrino Observatory (SNO) solar neutrino experiment, conducted between 1999 and 2006.

Work began on SNOLAB in 2004 and was completed earlier this year.

The $70-million project, which even includes flush toilets for workers, a real luxury 6,800 feet below ground, has increased the underground space to 5,000 square metres, in addition to a 3,100-square-metre building on the surface of the Creighton mine site.

The facility’s development was funded by the International Joint Venture Program of the Canada Foundation for Innovation, the Ontario Innovation Trust, the Northern Ontario Heritage Fund Corporation and FedNor.

David Sinclair, the project’s director of facility development and a physics professor at Carleton University, said the potential for world-leading research is there.

“We have now reached the point where this laboratory is built, we’ve managed to accomplish what we wanted to do, and now we’re really ready to welcome the world to do experiments here.”

Mayor Marianne Matichuk congratulated those who worked to make SNOLAB a reality.

“The City of Greater Sudbury recognizes the importance of this unique facility, and the significant role it plays in our community and around the world,” she said, adding that the city has funded public education work done by SNOLAB.

Gilles Patry, CEO of one of the project’s major funders, the Canadian Foundation for Innovation, said he was excited to visit SNOLAB for the first time, and said the facility will help scientists improve the “fundamental knowledge of the outer universe.”

SNOLAB is set to host several projects exploring some of science’s biggest questions.

Ian Lan and Corina Nantatis assemble equipment for the DEAP 3,600 project, which is searching for dark matter, at SNOLAB May 17. Photo by Heidi Ulrichsen.

Several are searching for dark matter, although there is also a project examining the nature of solar particles, called neutrinos, and one trying to detect supernovas, or exploding stars.

Dark matter is a type of particle that physicists think makes up much of the mass of the universe.

SNOLAB’s strength is its deep underground environment, according to Fraser Duncan, the associate director of SNOLAB.

“Our enemy in our experiments are naturally occurring background radioactivity that can hide the signals that we’re looking for,” he said.

“We’re looking for things that are very rarely occurring in nature. The experiments that are going into this hall are looking for events at the level of one event per tonne of detector material per year.”

Because there’s naturally-occurring radiation in the dirt and dust from the mine, workers have to take great care not to bring it into SNOLAB.
“When we bring ourselves or equipment in, we ourselves shower, and the equipment is very carefully cleaned, and we maintain the level of cleanliness like a hospital operating room,” Duncan said.

Information of a different sort is sought by those behind the Helium and Lead Observatory (HALO) project.

The experiment is looking to detect the large burst of neutrinos that occurs when a star goes supernova, or “exploding massive stars that evolve to a certain point and go boom in a spectacular fashion,” according to Laurentian professor Clarence Virtue, who is part of the experiment.

The neutrinos interact with particles in the lead and turn into neutrons, which, in turn, are detected by the helium, he said.

“Neutrinos come out immediately from the core of the collapsing star,” he said, long before the explosion reaches the surface of the star and becomes visible. “It’s possible we can tell the astronomers a star is about to explode in the next few hours in our galaxy.”

Supernovas only happen two to four times a century. Virtue, though, is hopeful he’ll witness one in his lifetime.

The SNO+ experiment, which involves Laurentian University researchers like Christine Kraus, is using the same equipment as the original SNO project to continue the exploration of how the sun’s energy works.

However, instead of suspending the detector in heavy water, which cost millions of dollars, it will instead be suspended in a solution called linear alkyl benzene, a substance used to manufacture products such as dish soap.