Betina Hodak is a professional engineer, but works part-time at a Beer Store in Sudbury. She has struggled since 2013 to find work in her field.
Apr 12, 2015 6:20 PM By: Jonathan Migneault 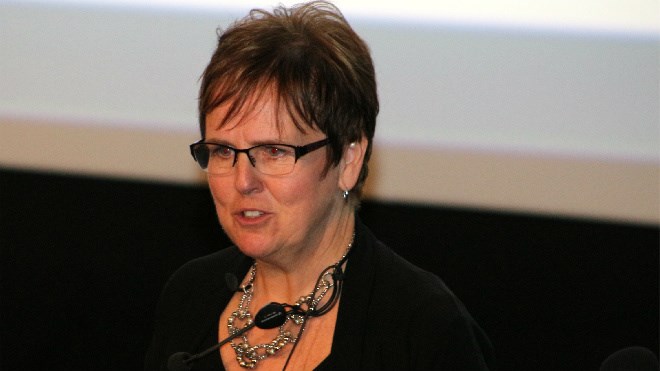 Retired Vale engineer Sue Tessier spoke at a Canadian Institute of Mining event in March about the “crisis of underemployment” in engineering. File photo.
Betina Hodak is a professional engineer, but works part-time at a Beer Store in Sudbury.

She has struggled since 2013 to find work in her field.

Hodak graduated from the University of Western Ontario in 2000 with an electrical engineering degree, did some contract work Windsor in the automotive engineering in vehicle quality support, but was laid off from the Ford Motor Company after five years.

She later found a job in London, as an electrical engineer, where she commuted each day from Windsor.

But Hodak was laid off from that job in 2008, the year she was licensed as an electrical engineer.

“I was told it didn't seem I was committed to the job because I hadn't moved,” Hodak said.

In 2012, Hodak and her husband Mark, also an engineer, relocated to Sudbury, where she was able to land a job with Tracks and Wheels, a mining and construction equipment manufacturer.

After she was laid off from that job in 2013, she has continuously applied for engineering jobs, but has rarely ever gotten calls back.

“Some of the circumstances in which my wife lost her job never sat well with us,” said her husband Mark.

One of her layoffs, he said, was after she had returned from maternity leave. Hodak and her husband contacted the Ministry of Labour, and the case ended up going to arbitration, where they eventually reached a settlement with the company.

As part of their agreement with the company, they can't discuss the settlement's terms.

Mark is gainfully employed as a mechanical engineer, and is able to support their family – they have three children – with his salary, but said they still live modestly with Betina only working part-time, and making minimum wage.

Sandro Perruzza, the CEO of the Ontario Society of Professional Engineers, said it is a common practice for companies to post jobs so they can build a database of potential candidates in case they get a big contract that requires a hiring spree.

But if those big contracts never come, the positions remain unfilled.

The Ontario Society of Professional Engineers recently published a report on what it calls a crisis of underemployment among the province's engineering-degree holders.

Using data from the 2011 Canadian National Census – the latest data available – the society found that in Ontario, only 29.7 per cent of individuals with engineering degrees worked as engineers or engineering managers.

Around 33 per cent of engineers in Ontario – like Betina – are working in jobs that do not require a university degree.

According to the report, other licensed professions, such as lawyers, doctors and teachers, have a much higher proportion of degree holders working in their chosen fields.

“The root cause of this is organizations trying to save a penny here, a penny there,” Perruzza said.

He said there are more unlicensed engineers working in Ontario than professional engineers, who have completed the work experience requirements (four years) needed to attain their licences.

Professional engineers are often more expensive to hire than skilled technicians or engineering degree holders who have not completed their licensing requirements.

Through Ontario's industrial exception manufacturers can hire non-professional engineers to do engineering work.

Mark Hodak said that can be a recipe for disaster, especially when employers are not choosing professional engineers for leadership positions that require a strong engineering background.

Sue Tessier, a retired mining engineer with Vale, addressed the underemployment of professional engineers at a Canadian Institute of Mining event.

She said in her experience, the problem is more pronounced in southern Ontario than it is in Sudbury.

“Here in Sudbury we don't see it, but in southern Ontario you would see there are a lot of engineers coming to Canada, or even recent graduates, that are working what I would consider lower paying jobs because they just can't get people to hire them,” she said.

While Tessier said her career with Vale was fulfilling, she added women often struggle attaining the top levels in many companies.

“I think there are still some glass ceilings in engineering when it comes to the top positions in companies, or in management,” she said.

Because of her struggles to find work in her field, Betina Hodak is prepared to give up on engineering altogether.

She has looked into Ontario's second career programs to return to school and enter law enforcement, but because she has an engineering degree, she might not be able to get financial support if she returns to school.

“She likes being an engineer but there's nowhere to do it,” her husband said. “At what point do you cut your losses and move on?”