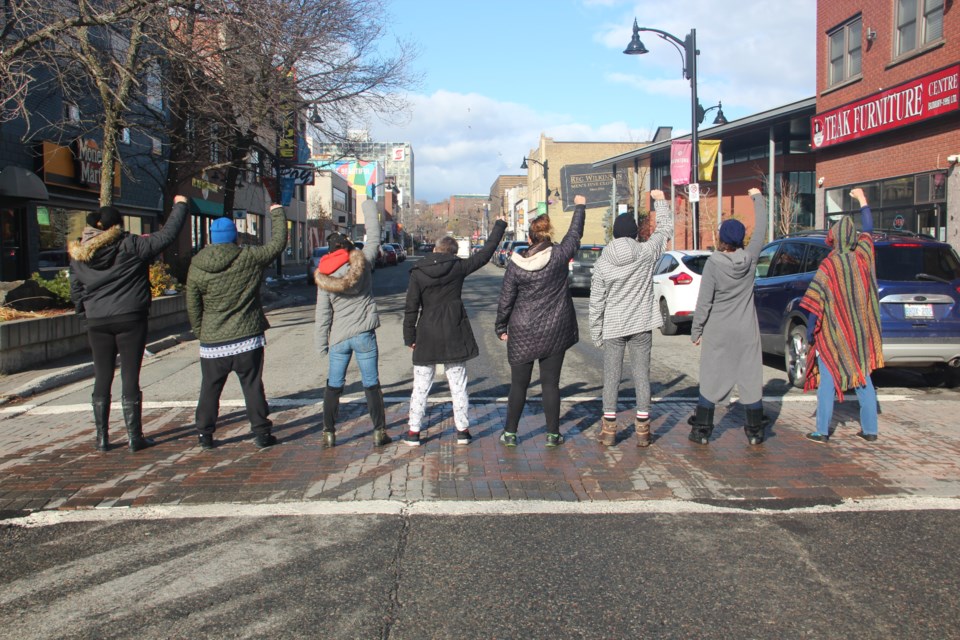 Participants in Project ArmHer in a show of strength in downtown Sudbury. (Heidi Ulrichsen/Sudbury.com)

When most people think about sex workers, a number of stereotypes come to mind, but they seldom hear from those with actual lived experience on the topic.

In fact, sex workers say they've been systematically silenced when it comes to the conversation around their work and their lives.

Project ArmHer, a multi-media and theatre project put on by members of the Sex Workers Advisory Network of Sudbury (SWANS), aims to change people's misconceptions of sex work.

The project is based on the stories of women with lived experiences in sex work, and includes visual art (body maps, life size armour and masks) and film.

The audience will gain an understanding of how they can become community allies and partners in the prevention and recovery from sexual violence.

Mitchell, a social worker, documented their words on video — some of the voices included in the show actually belong to women who have since passed on.

The result is a show they've performed not only in Sudbury, but in other Ontario cities. If you're interested in taking in the show, it's being presented again in Sudbury Nov. 18 for the first time since 2017.

Project ArmHer has “meant the world to me,” said SWANS member Shelly Grigg.

“I live for this project,” added Grigg, who said she exited sex work herself six years ago.

“I live to coming for it. It gets me out of my house. It gets me to explain why, to tell my story, what brought me out to doing what I did, and where I stand today.”

She said people should go to see the show to “understand why girls are put in the situation they're in.”

Tracy Gregory is the founder and executive director of SWANS. She said the group is made up of women with lived experience with sex work, both past and present.

“We do a lot of peer support where it's just unpacking your stuff around your lived experience,” she said. “There's no judgment, there's no shame.”

As for Project ArmHer, it has been a really powerful experience for the SWANS members to “actually see your lived experience reflected back to you in such a creative way,” Gregory said.

“When we get to see the response from the audience members … it really humanizes the experience of women who have worked in the sex industry.”

Gartshore said the project “kind of picked me” because she'd been friends with Gregory for years before getting involved with Project ArmHer.

“It's been a game-changer for every person who's been involved in the project,” she said. “The project has offered all of us so many gifts.”

While it's a heavy topic, Gartshore said she included a lot of humour in her writing. Laughter isn't uncommon at rehearsals.

“We want the show to entertain and to show the humanity of the sex-working community,” Gartshore said.

Admission costs $25 in advance and $30 at the door. Advanced tickets can be purchased through e-transfer at armhercollective@gmail.com (no password required). All proceeds will go to Project ArmHer.

Please note that because the performance deals with mature subject matter, audience members must be at least 13 years old.

Sudbury's NORCAT finds a 'silver lining' in the pandemic
Jul 10, 2020 6:00 PM
Comments
We welcome your feedback and encourage you to share your thoughts. We ask that you be respectful of others and their points of view, refrain from personal attacks and stay on topic. To learn about our commenting policies and how we moderate, please read our Community Guidelines.