Protesters say something must be done about local home improvement company 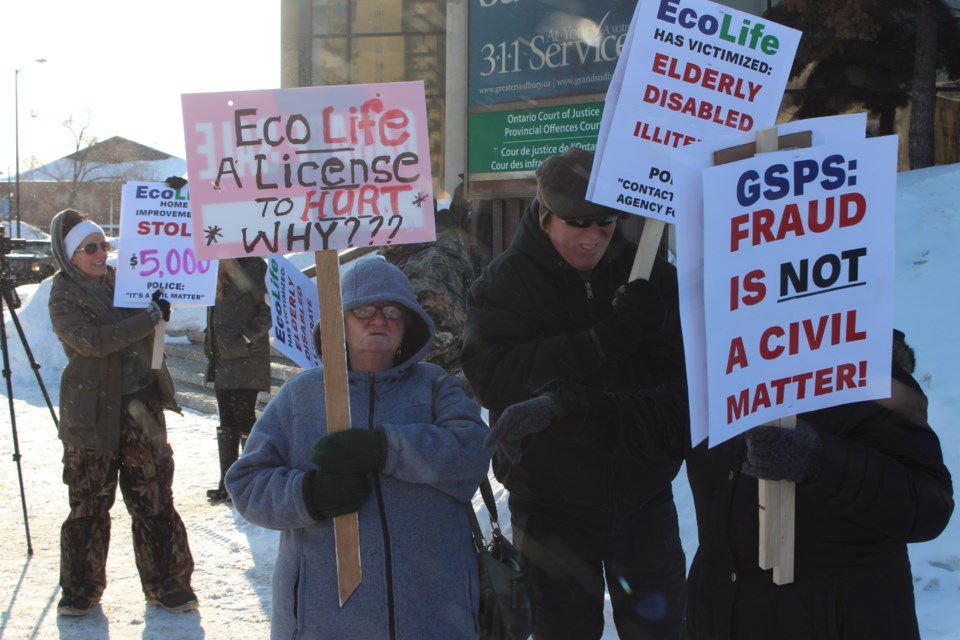 More than a dozen Sudburians gathered at the corner of Paris and Brady streets March 7 to protest a Sudbury home improvement company they say has left numerous Sudbury residents out thousands of dollars. (Matt Durnan/Sudbury.com)

More than a dozen Sudburians gathered at the corner of Paris and Brady streets March 7 to protest a Sudbury home improvement company they say has left numerous Sudbury residents out thousands of dollars.

The focus of the protesters' anger is David Murray, the owner of a local contracting company, EcoLife Home Improvements Inc. Protesters told stories of being bilked and bullied when they dealt with the company, sharing stories of how much money they lost, about paying for a job on their homes that was never completed.

When asked by Sudbury.com to comment on the accusations, Murray issued a statement, blaming the Ford government's cancellation of the GreenON program as the main reason that a lot of work hasn't been completed.

"This isn't just a Sudbury problem, it's an Ontario problem," he said when reached by phone.

The full text of Murray's statement is at the end of the article. In his statement, Murray did not address any of the specific allegations being made by protestors, and no criminal charges have been laid against Murray or EcoLife at this time.

Angele Poulin, who helped organize the event and create a Facebook group for victims, said she shelled out a $5,200 deposit in April 2018 to have new windows installed in her home in Wahnapitae, under and agreement with Murray.

The window installation being offered by EcoLife was part of the Ontario Government's GreenON program, which offered rebates to consumers who installed high-efficiency windows, insulation, and other home improvements.

"We gave [Murray] a deposit for the GreenON program to have windows installed,” Poulin said. “It's a great program and you can get about $500 back per window, so we thought it was an awesome idea.

"The deposit was for $5,200 and we were told we'd have our windows by June or July at the latest — and we still don't have our windows. There was a cutoff date of Oct. 31 to have your windows installed to have the government grant."

Poulin's story is not unique among those who attended Thursday's protest, as similar stories of customers being pressured to quickly hand over cheques or large sums of cash – and not seeing any work completed – were common.

One man, who did not wish to be named, was protesting on behalf of his 77-year-old mother who he said is out $20,000 after she paid for multiple jobs done on the exterior of her house.

"I don't want to give my name because she's still on the hook for this money and that work has to get done," said the man, who said EcoLife did complete a previous job installing new patio doors at his mother's house, but used that as leverage to get more money.

"She paid for the first job and it got finished, but then she was told they can do her windows, eaves, soffit, a bunch of other stuff, and it was going to cost $20,000."

None of the work was ever completed, the man said.

"This needs to be looked into, there are far too many [people]," said Poulin. "I thought I was going to have my windows before my baby was born, it's a year later almost and they're still not installed. We're out $5,000 and we can recover from that, but some of these people here are on a fixed income and are out a lot more than we are."

Between the Better Business Bureau website and another consumer review and complaint site called PissedConsumer.com, there are more than 60 comments regarding Ecolife and David Murray, going back to at least 2011. A handful of those comments were positive, but the vast majority were complaints, criticizing the quality of the work done by Ecolife as well as the company's business practices.

While Murray points to the termination of the GreenON program as the problem, Chantelle Gorham says Murray has been employing similar business practices under different company names for at least five years, long before the GreenON program was under threat of cancellation.

Enough is enough, said Gorham, who says she got involved when a friend was "victimized." She told Sudbury.com when people complain to police about Ecolife, they're told civil court is the avenue for such complaints. So she and Poulin decided the public need to know about how they say the company operates.

"I'm trying to warn the public to not give this guy money," Gorham said last week.

EcoLife naysayers have also taken issue with the company falsely presenting themselves as a member of the Greater Sudbury Chamber of Commerce.

The company has both a front cover ad and a full page advertisement in the 2018 Sudbury yellow pages. The full page adverstisement bears the Greater Sudbury Chamber of Commerce logo, though EcoLife Home Improvements Inc. has not been a member of the chamber since 2015.

"They are not members of the chamber, they have been in the past but they are not at the moment," said Debbi Nicholson, Greater Sudbury Chamber of Commerce president and CEO. "I know they continue to use our logo and we have asked that they not do that, they haven't been a member since 2015."

The chamber has indicated in writing on more than two occasions that this is misrepresentation and have asked EcoLife to stop using the chamber logo.

"I understand that with the yellow pages online they've removed the logo from that ad, but with the new phone book that has just come out they have included it in that one," said Nicholson. "I know they were using it on their website as well and we've asked them to stop using it."

Nicholson explained that the chamber does not give their logo to non-members for use, but members are provided with a "proud member" logo that they're free to use on stationary, adverstisments, and websites.

This is what Tony Nash says happened to him

Tony Nash says he's one of the people who fell for Murray's door-to-door sales tactics, and he has the documentation tracking his ongoing experience to prove it. He said both he and his neighbour signed on in 2018 to have their windows done by EcoLife, again hoping to capitalize on the GreenON program.

A contract was signed by Nash in June of 2018, with an agreement in place that the work would be completed by August or September of that year. Nash says that Murray put the pressure on and employed some pushy sales techniques to get the deal done.

After some issues with a back-dated cheque, and months of waiting, which Nash admits should have been a bigger red flag, he said his neighbour's windows were done by Ecolife, but not him. He was reassured he was next, but still nothing happened.

Finally, Nash had enough and he went to Murray's office on Notre Dame Avenue to serve him papers that he was taking him to small claims court.

"[Dave] ran out in front of me and blocked the door, and when I tried to leave he bumped me in the chest," said Nash. "I told him I wasn't fighting him and left. He came outside after me and was yelling and swearing at me."

At Thursday's demonstration, Nash said he was heartbroken to hear stories from so many elderly people who were out tens of thousands of dollars.

"My heart just goes out to these people,” Nash said, tearing up. “This has to stop."

Nash said he wants to pursue criminal charges against Murray for fraud. He is also in contact with Nickel Belt MPP France Gélinas to look into whether Murray may have defrauded the GreenON program.

Greater Sudbury Police are currently investigating a number of complaints from Sudburians about EcoLife, but the grounds on which police can lay criminal fraud charges aren't as black and white as many believe it is.

Detective Sgt. Chantal St. Martin of the GSPS Criminal Investigations fraud unit explained that there isn't one definitive dividing line that separates criminal fraud from cases that are dealt with in civil court, and that fraud is something that is very much dealt with on a case by case basis.

"It's a very fine line between the civil and criminal element and there has to be a lot of factors in play and each case has to be assessed on its own merit," said St. Martin. "When it comes to criminal [fraud] we have to distinguish that there has been a deprivation and a dishonesty that have come into play. There has to be some kind of knowledge from the person committing the offense that they are comitting an offense."

There are instances, according to St. Martin, where it can be hard for people to understand why their cases don't fall under the Criminal Code and frustration can mount among those who have fallen victim to dishonest business practices.

"I think that's part of what has happened here in some situations," said St. Martin. "Even though it was explained by detective (Andy) Williams, sometimes it doesn't reach home. It's tough because it's a case by case basis, it's hard to even give examples because every situation is different."

March is Fraud Prevention Month, and Sudburians can review Ontario's Consumer Protection Act online. Contractors have to follow a set of rules that are outlined in the act, including things like how much money can be taken as a deposit, as well as start and end times for jobs.

Charges laid under the Consumer Protection Act are made by the Ministry of Consumer Services, but these fall into the civil side of things, and don't qualify as criminal fraud.

"They have a lot lower threshold than the police do for when they can lay charges. We have to do it beyond a reasonable doubt, where they may only need other certain factors like hearsay, and they don't tend to enter into investigations unless there's a lot of people complaining about a certain company," said St. Martin.

"Our cases have to stand alone in the sense that yes we can look at them as a picture to help us make our decision to lay charges, but on the other hand every case is going to be looked at individually when it hits court and it has to be able to stand up on its own two feet. Our burden of proof is much higher."

Murray's full statement is as follows:

EcoLife Home Improvements Inc. is a Sudbury-based small business, focused on delivering premium, high efficiency, home retrofits. We are proud of our work and our responsibility to our customers and our community.

The program created major market demand, a rush on limited supplies, and limited human resources impacted businesses like ours across the province. Shortly after the program began, the newly elected Conservative government terminated it and set dramatically unrealistic deadlines for completing projects.

That decision put massive pressure on already stretched businesses including EcoLife Home Improvements. Limited supply caused delays. Over 50 weeks of work needed to be completed in 10 weeks or less. The expectations created by the program were compounded by its cancellation.

It was impossible for any business, particularly a small business, to plan for such circumstances. A backlog of projects occurred. Harsh winter weather has prevented all but a few out-of-season installations.

In an effort to ensure customers received their full incentive, EcoLife Home Improvements made an effort to guarantee as many incentives as possible including in some cases rebating the costs directly.