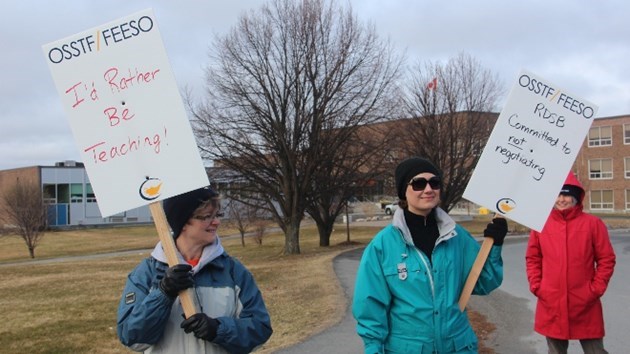 Members of the Ontario Secondary School Teachers' Federation (OSSTF) are seen here on the picket lines in Greater Sudbury during a 2015 labour dispute. The union is taking issue with changes to the education system announced by the Ontario PC government. (Supplied)

“OSSTF/FEESO’s response in defence of that system will be commensurate,” the union representing English public high school teachers said in a press release.

Among the changes announced March 15 are increasing class size caps by six students at the high school level and by one student at the Grade 4-8 level.

A press release from the OSSTF called the changes “devastating,” adding “many of which will have a direct negative impact on OSSTF/FESSO members and the students they work with every day.”

Most significantly, the press release said, average class size ratios in secondary schools will rise from 22:1 to 28:1.

Phased in over four years, this will result in a loss of 3,630 front-line OSSTF teachers from Ontario’s public education system – a loss that cannot possibly be absorbed without a significant impact on student learning and success, said the press release.

The union also spoke out about the changes to the Ontario Autism Program, which will put more pressure on the school system and the reduction of funding to school boards.

“These moves, along with other measures announced today, amount to an appalling betrayal of the public trust,” the union said.

“Not only do they make a mockery of the claim that there is fat to cut in Ontario's public education system, but given the premier’s repeated election promises that no jobs will be lost, the government quite simply has no mandate to make the changes they have announced this morning.”

The Elementary Teachers’ Federation of Ontario (ETFO) also put out a press release criticizing the changes to the education system.

“The Minister of Education has heard elementary educators and parents and will maintain class size caps in Kindergarten through Grade 3,” said ETFO President Sam Hammond, in the press release.

“However, raising class size in grades 4-8 will have a long-term negative impact on Ontario’s students. Larger classes mean less support for individual students and will disproportionately impact students with special needs.

“The government has announced hundreds of millions of dollars in cuts at the same time as thousands of students with autism are about to enter schools with no additional supports or resources.

“The Minister’s proposed changes to current hiring practices are also concerning. Research on new hiring practices introduced in 2012 found that the changes resulted in a more consistent, transparent and fair hiring process for Ontario’s occasional and new teachers when implemented properly by school boards. There was no increase in unsatisfactory teacher performance and no negative impact on hiring for diversity.

“The government’s intention to increase class size, modify hiring practices and reduce supports for students with special needs outside of the collective bargaining process is a violation of collective bargaining rights under the Canadian Charter of Rights and Freedoms. All of these items were the subject of the last round of negotiations and we will use all means at our disposal to defend our right to collectively bargain these matters.

“As for the Health and Physical Education Curriculum, the Minister has listened to elementary educators and parents by including lesbian, gay, bisexual, transgender and queer (LGBTQ) issues, gender identity and consent.

“While teachers will continue to use their professional judgment, there is still a need to consult further on the curriculum as to when these topics are taught. Our educators will require resources to support implementation of the new curriculum.”

“There will be more kids in every class, and fewer adults in every school,” said Stiles. “Students at all grade levels are already in crowded classrooms. Teachers are stretched thin, and that means students are often not getting the help they need to excel.

“We know that when class sizes will get bigger, student learning and student achievement can suffer. By taking away one-on-one attention, Ford is making the future a little bleaker for a lot of kids.”

Friday’s announcement also ignored $16-billion worth of repairs being ignored right now, from leaky roofs to broken windows and lead in the drinking fountains, the press release said.

“Kids in Ontario deserve more opportunities, not fewer,” said Stiles. “We can have a world-class education system in this province, but we need to invest in children and their future, not make cuts on the back of our kids.”