“We believe progress was possible and that our time would be better spent negotiating,” Dewar said in the news release. “The union, however, did not come back to the table to respond.
Apr 26, 2015 4:59 PM By: Arron Pickard 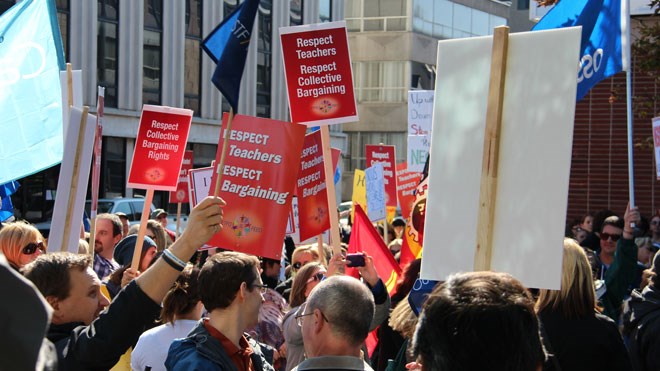 Members of the Ontario Secondary School Teachers' Federation in 2012 held a rally in downtown Sudbury. As of Monday, English public high school teachers will hit the picket lines, as negotiations with the Rainbow District School Board have failed. File photo.
“We believe progress was possible and that our time would be better spent negotiating,” Dewar said in the news release. “The union, however, did not come back to the table to respond. They also advised that they would be cancelling the next day of bargaining, effectively shutting the door on any opportunity to move forward.”

“I want to straighten this out, because the news release from the school board yesterday was a bit misleading,” he said. “We did not cancel any bargaining dates for next week. The bargaining dates for next week were for occasional teachers, not full-time teachers. The other factor is, the mediator from the Ministry of Labour isn't able to make it that day anyway. It was cancelled on behalf of the mediator, so I'm not sure what Ms. Dewar is talking about there.”

In the press release, the school board also suggested they responded to all of the proposals, and while they did respond, “what they failed to mention is that, for any substantial proposal we had, the answer was no. This was not a no with a proviso, or no with a counter proposal, it was outright no,” Clyke said.

“I'm not sure what the school board defines as negotiations, but that certainly isn't the definition I follow.”

His union members have no interest in being on strike, and would rather be at the bargaining table, Clyke said.

“If the school board came to us and said they were authentically going to give bargaining a try, we would be the first ones at the table,” he said.