The award recognizes a student who has a sound academic record and outstanding community service and leadership
Jul 7, 2018 1:30 PM By: Sudbury.com Staff 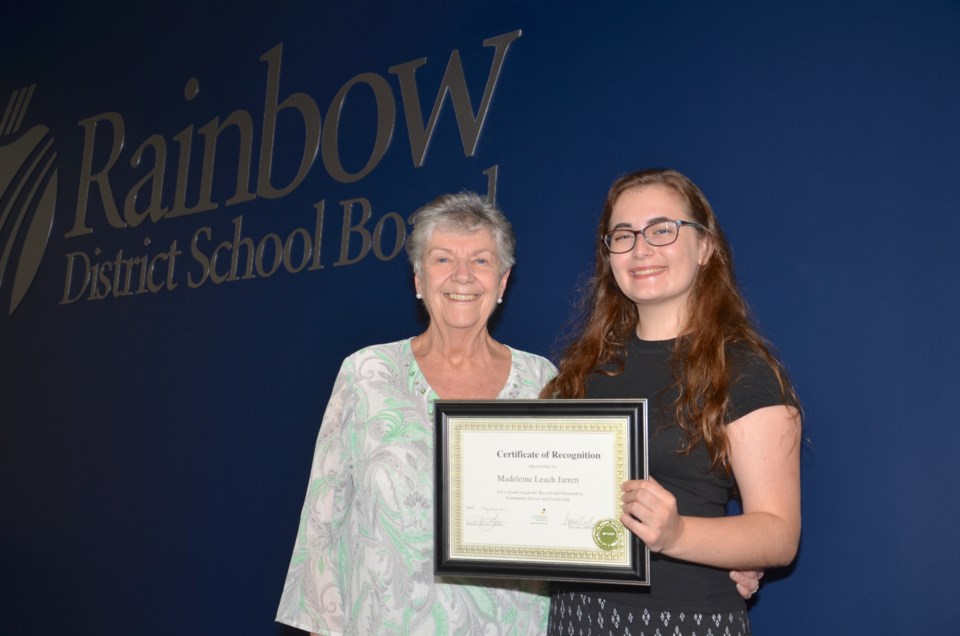 Rainbow District School Board Chair Doreen Dewar presents a Certificate of Recognition to Student Trustee Madeleine Leach Jarrett on behalf of the Ontario Public School Boards’ Association. The award recognizes a student who has a sound academic record and outstanding community service and leadership. (Supplied)

The Rainbow District School Board’s student trustee has been honoured at the provincial level.

Madeleine Leach Jarrett has received a Certificate of Recognition from the Ontario Public School Boards’ Association (OPSBA). The award recognizes a student who has a sound academic record and outstanding community service and leadership.

“As Chair of Rainbow District School Board, it has been a pleasure to welcome Madeleine Leach Jarrett to the Board table during the 2017-2018 school year,” said Doreen Dewar, who presented the award on behalf of OPSBA at the board meeting held on July 3.

“Madeleine has been a powerful voice for students, a young person who expresses herself with poise and professionalism.

“Always putting students first and foremost, Madeleine has gained the respect of all of us at this table with her ability to capture the importance and impact of programs and policies on student success. She has the ability to bring people together toward a common goal, creating a strong sense of purpose and passion.”

Director of Education Norm Blaseg also paid tribute to Madeleine Leach Jarrett at her last meeting as student trustee. He commended Leach Jarrett for making a difference, particularly in the area of mental health.

“Along with members of the Student Senate, you established a foundation on which we can continue to grow,” said Blaseg. “I would like to thank you for sharing your insights, and for being a thoughtful spokesperson for students.”

Leach Jarrett joined the Student Council at Lo-Ellen Park Secondary School in Grade 9, serving as President in the 2016-2017 school year. In that role, she represented her school on the Board’s Student Senate where her peers quickly acknowledged her leadership skills and she was elected Chair in 2017-2018.

As Student Trustee, she has been an articulate advocate for students locally and provincially, where she co-chaired the Student Well-being Committee for the Ontario Student Trustees’ Association.

Leach Jarrett graduated from the International Baccalaureate Program at Lo-Ellen Park Secondary School in June. She will study Biology and Political Science at the University of Toronto this fall.

Two new forest fires found in the region on Tuesday
Jul 14, 2020 6:39 PM
Comments
We welcome your feedback and encourage you to share your thoughts. We ask that you be respectful of others and their points of view, refrain from personal attacks and stay on topic. To learn about our commenting policies and how we moderate, please read our Community Guidelines.