French and Catholic boards say public school is trying to muddy the water as it faces angry parents
Sep 29, 2016 10:24 AM By: Heidi Ulrichsen 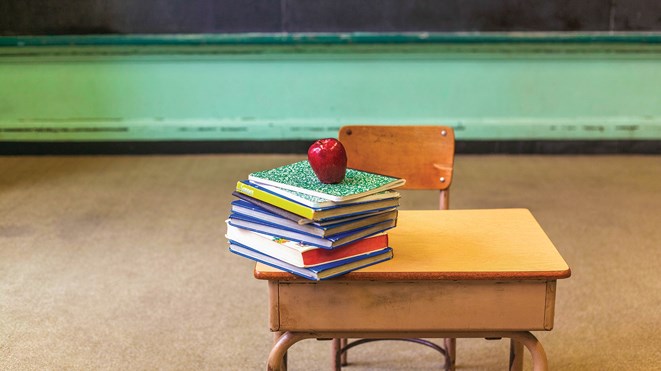 The Rainbow District School Board has passed a motion urging all four school board systems be merged into one single system. File photo

Rainbow District School Board's motion to merge all Ontario boards into a single entity doesn't sit well with its compatriots in the French and separate school systems.

The motion passed by the Rainbow board Sept. 27 said the letter would be sent to Premier Kathleen Wynne, Education Minister Mitzie Hunter, local MPPs and the Ontario Public School Board Association.

Supporting school board mergers isn't new for the Rainbow board, which is currently undergoing an accommodation review process where it may close up to a dozen schools to deal with declining enrolment and funding cuts.

Doreen Dewar, the board's chair and a veteran trustee, said she can remember urging at least four or five different ministers of education from two different governments to merge school boards.

“We do know there would be a tremendous saving because right now there's a duplication,” she told Sudbury.com this week.

Her argument, though, is more likely a case of sour grapes, because Dewar's board has the unenviable task of having to tell parents the board has decided to close their child's school, say representatives of French Catholic and English Catholic boards.

Jean Lemay, chair of the association with represents the eight French Catholic boards in the province, said the board built its own school in Espanola — where it used to share space with the Rainbow board — to prevent French children from losing their language and culture by being assimilated by the majority English population.

Cost isn't the issue, it's about rights, Lemay said.

“We have rights, through the constitution, to educate our own kids in French,” he said, adding the same rights exist for Catholics.

Lemay said enrolment is actually increasing at French Catholic boards across the province, including in Sudbury.

“If the English boards are losing students, they will have to bite the bullet and close some schools,” he said. “It's not by amalgamating anything that you will create more spaces or fill up those spaces.”

On the other side of the fence, the chair of the Sudbury Catholic District School Board said he thinks the Rainbow board passed the motion for a more politically strategic purpose.

Michael Bellmore said he thinks Rainbow's motion calling for school board mergers is just a “deflection” from the unenviable task its trustees have before them.

While he certainly understands what they're going through, as Sudbury Catholic has been in the same position, Bellmore said talking about school board amalgamations right now “adds mud to the water” and just complicates things.

“It's sadly a complete deflection, and I'm disappointed,” he said.

In making his case that folding the four school board systems into one wouldn't save money, Bellmore brings up the spectre of the municipal amalgamations of the early 2000s.

“There's not been a lot of cost savings from that,” he said. “And certainly if you speak to the people from the outlying communities, they feel their level of service under amalgamation have decreased while their taxes have increased.”

Board amalgamations would not reduce the number of students, Bellmore said.

“So there still would be a requirement for almost identical levels of teaching and support staff,” he said. “We're still going to need all those classroom spaces and administrative support.”

But Dewar said there is both precedence in other provinces for merging and a financial argument, as well.

In fact, during the 2014 provincial election, the Ontario Greens said merging the school boards would save more than $1 billion a year.

“I ask you to look at the small communities,” Dewar said. “If you have one building instead of two or three, is that a savings? I definitely feel that you would still have programs, supervisory officers, trustees for each of the groups.”

While collaboration is a good thing, especially in small communities, Dewar said in many of Canada's provinces and territories, there are no Catholic school boards.