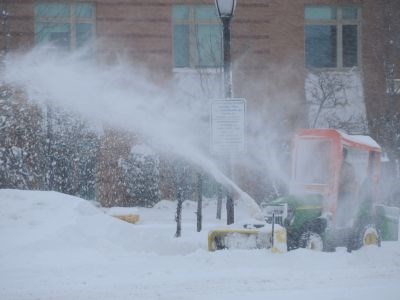 Sudburians continue to dig out of the largest snowfall for a Dec. 20 and Dec. 21 since at least 1954. Photo by Marg Seregelyi.

While the winter storm warning remains in effect for Greater Sudbury, it didn't freeze plans by Liberal leadership candidate Justin Trudeau to speak to St. Charles College students this morning.

This most recent snowfall is more than double the biggest snowfall ever recorded in Sudbury on Dec. 20, according to Environment Canada. That happened in 1978, when 13.8 centimetres of snow fell. For Dec. 21, the snowfall record was 9.6 centimetres in 2008.

Since the snow started Dec. 20, the Sudbury Airport has reported 29 centimetres of the white stuff, 13 of those fell on Dec. 20.

The snow is expected to end late this evening, with a 40-per-cent chance of flurries, according to Environment Canada. Flurries are supposed to clear up Dec. 22 with temperatures forecast to be steady near -9 C.

A mix of sun and cloud is expected for Dec. 23, making way for sun on Christmas Eve and Christmas Day.

Greater Sudbury Police Service said there had been five weather-related collisions and two vehicles ended up in the ditch as of 11 a.m., and those are only the ones police know about, said Const. Meghan O'Malley.

Police are cautioning motorists to drive safely, to clear off their vehicles before driving, and to take extra time to arrive at your destination.

Federal Liberal leadership candidate Justin Trudeau poses with St. Charles College school president David DiBrina on Dec. 21. Only about one-tenth of the expected audience turned out for the discussion, but it was still a memorable experience for those in attendance, said the Sudbury Catholic District School Board. Supplied photo

The snow did not hamper plans for Trudeau's visit to St. Charles College. Although 1,000 students were expected to attend, the snow storm and school bus cancellations whittled down that total to 100, providing an intimate and interactive discussion with the politician this morning.

Trudeau arrived at the school around 8 a.m. to meet the staff and students, said the Sudbury Catholic District School Board in a news release. He also expressed that he wanted to come and meet school president David DiBrina who has done a lot of work in the area of youth leadership in the city.

Trudeau agreed to continue his talk on youth empowerment and leadership in the school’s amphitheatre. The discussion was inspiring according to Kristen Wilcox, a Grade 11 student at the school.

“He made me really think about changing the way I live and the things I do, so that I am working towards creating a better world for my generation and future generations.”